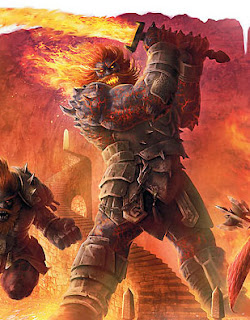 Episode 46: Heartbroken
I fell a little behind and I'm getting caught up now! I've been working on this gigantic .pdf for the DMs Guild for many a tenday. It's done, so hopefully I can get back in gear. 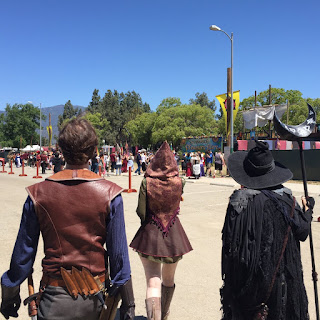 The group actually went to a renaissance fair in real life as their characters. I like it when the crew is at the same table, I hope we get to see more of it. Maybe for episode 50 or 75? They should play somewhere fitting, like on a boat or a castle or something. Although if it's a boat, they might get seasick, and come to think of it, their dice would roll all over the place if the seas be turbulent.

Paultin is inside a golem and he was hit with a reduce spell, so he’s child-sized. The rest of the party is fighting fire giants in the assembly hall of a massive, disassembled golem. Evelyn hit one piece of this golem, the heart, with her magic axe, Lightfall. Lightfall got destroyed! 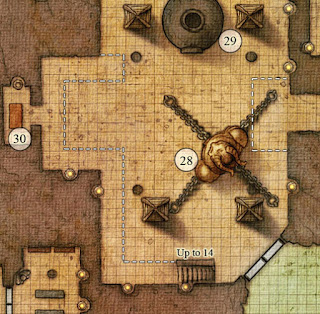 The Duke sees that his hell hounds are dead. He’s despondent.

More people enter the hall. It’s Krak Dragonspore in his magic armor, and the golem. Hmm... so is Krak the dao in disguise? Krak tells the group to help Paultin figure out how to control the golem. Diath rescues the animals, who were in the rubble. He notices that the cranium rat is wounded. He bandages it real quick.

Here comes Duchess Brimskarda, her two kids and some more giants. Evelyn sends the heart crashing to the floor. It actually cracks the floor.

Strix is still super-strong because of the potion of giant strength. Evelyn is up on a gantry above the floor. Brimskarda, the fire giant duchess, jumps and ends up hanging from it. Evelyn hacks at her fingers with Treebane. One finger from each hand comes off! Brimskarda falls 30 feet to the floor with a loud crash. Strix wants to keep those fingers.

The duke chucks a stone brazier full of hot coals at Evelyn. She’s down and dying.

Krak summons an earth elemental. There are big doors in here that lead outside. Krak tells them that they are magically sealed and that a fire giant has to open them by uttering a specific password.

Diath revives Evelyn with a potion of healing. He rolls well: 10 points! Evelyn is so happy that she jumps on Diath and hugs him and makes him uncomfortable with the nuzzling. Juniper, her mouse, is handed from Diath to Evelyn.

Strix wants a severed finger, but it is 60 feet away. How big is that finger? Is it a foot tall? Strix is hit with a thrown giant flagon and drops to 0 hit points. Some of the giants attack the golem, but they do no damage. I think it is immune to nonmagic weapons. Evelyn revives Strix.

Krak is getting pummeled. He strongly urges the group to get the doors open.

A giant picks up Paultin, and Paultin tries to trick him into opening the doors. He offers a reward, but is having trouble figuring out what the reward is. Evelyn tries to persuade the giant, too, but rolls poorly. 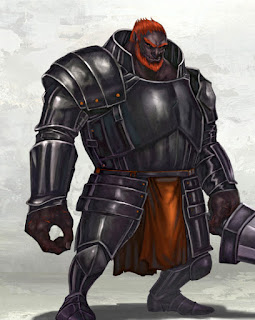 The Duchess hits the giant on the head and tells the giant to drop Paultin. He does. Once Paultin plops on the ground, she attacks him. Man, this is not going well!

One thing I am thinking is that Strix could gaseous form each hero one at a time, and they can slip through the cracks of the giant door. If there are cracks, that is. That would require the group surviving in here for 6 or 7 rounds.

Another option is to get one giant down to 1 hit point and hold it hostage (I think this option is actually covered in the adventure).

Krak turns into a pile of sand and bails out. One giant is down, and two are hurt. The golem and the earth elemental are doing all of the damage.

Diath spots a grate. Looks like the group is going to go in. Wow.. they need to get out through those doors. Strix is down, Diath heals her with a potion.

Strix polymorphs into a wooly mammoth. It has black emo hair and moths are flying around it.
Paultin rolls a death save. Natural 20! He’s up! He plays dead. Evelyn runs over, slings Paultin over her shoulder and flies onto the mammoth using her boots.

The golem and the elemental nearly kill the duchess. She turns and hits the mammoth. Strix is down again! She returns to her normal form and is unconscious.

Evelyn hits the floor and she’s unconscious. The waffle crew is going down, this is brutal! They need to get out of here.

The iron golem drops another giant. There’s 4 more giants remaining. Diath is right next to the duchess, who is hurt bad. Is an ally adjacent? I hope so.

Diath draws his short sword, intent on holding the duchess hostage. Awesome! He might save the party here.

Diath runs up her body, puts his sword at her neck and tells the giants to let them leave or she dies. Chris wants an intimidate check. Ohhh boy. He rolls a 10. Damn it!

Even though that didn't work, it was a great idea.

Paultin takes what he anticipates to be his last drink. That’s where we stop!

Such a fast paced episode! It makes me really want to run Ironslag myself at some point.
Strix did have a ton of hit points, but as she was moving away she provoked from several fire giants that carved into her for a ton of damage. Brimskarda's attack was just the one that took her down.

I am immensely enjoying this season, though I do wonder how they are going to get out of all of this (even after watching Episode 47). Chris seems both trying to help and hinder their progress at times, which is just how it goes as a DM. We don't kill player characters. They are perfectly capable of killing themselves. Especially when their dice suck, which seems to be the theme of the last several episodes. Lol

I have this strange hope that they will eventually TPK. But instead of dying, the drow will take then down to their city of Menzoberranzen, where they will have to deal with life as a slave to House Xorlarrin. Maybe they can navigate the political web of schemes woven by the priestesses, the Council of Spiders, Bregan D'earthe, the Jaezred Chaulssin...pretty much everybody down there actually. And survive rampant Demon Lord attacks while trying to escape to the surface.
Yes, I want to see the Waffle Crew transition from Storm King's Thunder into Out of the Abyss. Does that make me a bad man?

This is off topic, so I apologize. Just found your blog and wanted to say it's amazing. I found it after getting your adventure on dmguild and can't wait to see it continued also! I also believe you've got a lot of the planescape stuff I was looking for here after a quick glance 😁

Nykademos: No, not at all. There is a lot of really cool stuff in Out of the Abyss! Personally, I want to see this group go through White Plume Mountain or Tomb of Horrors. Thanks!!

John Smith: Yeah, I have quite a bit of planescape stuff. I run a planescape campaign and I've written guides on Sigil and the factions. I am finishing my guide to devils right now and I am hoping to have Warpath of Gruumsh out soon. Thank you!!

The guide to sigil is exactly what I need. Have you thought of putting it up on Dmsguild?