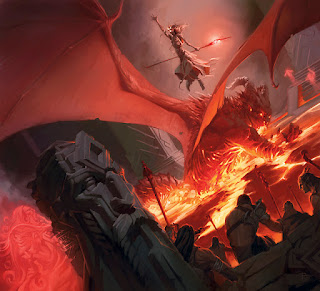 Episode 48: The Hero Conundrum
There are some great pictures of the waffle crew in their gear right here. This is my favorite: 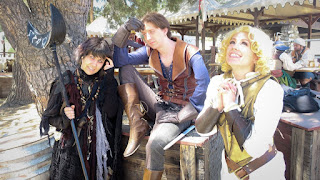 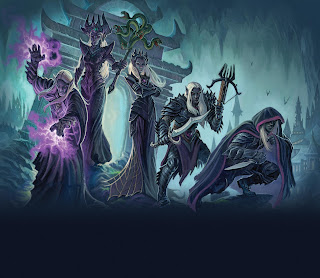 Last time, the group met Kozin, a drow with a tattoo of a spider on his face. The heroes fought fire giants and escaped Ironslag.

Kozin wants them to go back down into Ironslag to stop the giants from putting together and activating the vonindod, a massive colossus that will go on a rampage and kill many, many people.

The giants have a flask with Maegara, a primordial, in it. They are going to use it to finish crafting the vonindod.

The group are in some caves, having climbed up in here via a chimney in Ironslag.

The crew asks Jasper, the dwarf, how he got captured by the giants. Jasper says that he and his team of dwarves ran into some giants digging up a relic when they were ambushed by yakfolk and dragged back to Ironslag to serve as slaves.

Jasper says it might be suicidal to go back down into Ironslag.

The group spends a lot of time debating what to do next. They need a rest, but they also need to steal Maegara back and time is of the essence.

They consider making a distraction to draw the giants out of Ironslag. As that happens, Diath can sneak in alone and steal the iron flask/Maegara.

The group had blocked the chimney with boulders. Evelyn hears someone in there - sounds like it is one of the drow. She hears the drow swear when it realizes the exit is blocked. Evelyn is a bit offended by the drow’s potty mouth.

The group decides to remove the rocks and attack the person in the chimney. They open it. Nothing in there. Evelyn throws a boulder down the shaft.

Heyyy Kozin has faerie fire, which will reveal invisible creatures. He casts it. No invisible people. It looks like the drow climber got away.

After more deliberating, the group decides to go with the distraction plan. Evelyn makes up a theme song for the Distraction Force.

The group explores the caves and they find the exit. They want to call on Harshnag's bird. The players are trolling Sam, as they know he shot the bird last session.

Kozin tries to stammer out an excuse. The group gets suspicious of him and Kozin says he's afraid of birds, which the group finds amusing.

Diath goes through the burned yakfolk village looking for loot. He runs into the dao, who is wearing the armor of invulnerability. His true name is Kuharik.

Diath makes an insight check and realizes that this dao is evil and not trustworthy. Diath plays it cool and for now, the dao is an ally of the crew.

The heroes quietly talk about the dao while he guards the hut. Diath says they can't let him get the golem. Kozin has a great point: Maegara can melt the golem.

Paultin mentions that the golem was a gift from the Bronzefire clan to cement an alliance with the giants. So that means there’s traitors in Citadel Adbar.

The group takes a long rest.

Fully refreshed, Evelyn, Strix, Paultin and the dao are going to go to the front door and draw out the giants Diath and Kozin will sneak in and get Maegara.

The group convinces the dao to loan Evelyn the armor of invulnerability.

They give Waffles the baby owlbear to Jasper, who is going back to Citadel Adbar.

The group has Jasper cast a divination spell. They learn that Maegara is not in the flask, it's in the forge. The drow have the empty flask and they are apparently nearby.

Kozin knows the command word to activate the flask. He shares it with Diath.

The group realizes that the drow will exit through the caves just like they did. They're going to set up an ambush.

The drow come out and the group gets surprise! Diath does 25 points with a sneak attack. Evelyn ignites her new magic weapon, the Heart of Spinelli, and tears into them.

Strix drop a fireball on the drow that does piles of damage. The drow are still up, but hurt badly.

One drow tries to use the iron flask to suck the dao in. She holds up the flask, utters the command word, and Kuharik makes his save. The drow surrender. That’s where we stop!

Too much planning on this one for me! It wasn’t bad, but I am ready to move on from Ironslag.

By moridin's hoary beard I miss my tabletop days. You guys are the only thing keeping me sane! It's good to see quality dnd still exists like we used to run. I love strix. So glad she's powered up like a nuclear Augra (Skesis reference season 1?). 4-5-6 hooray for strix!