Dungeons & Dragons - A Guide to Juiblex, Demon Lord of Slimes and Oozes 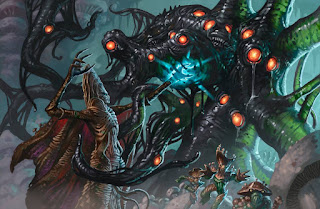 Today we’re going to make ourselves a resource. I’ve collected all of the information I could find on Juiblex, the demon lord of slimes and oozes.

There’s a lot more information on the realm that Juiblex rules rather than Juiblex himself. It seems like nobody is sure what to do with him. 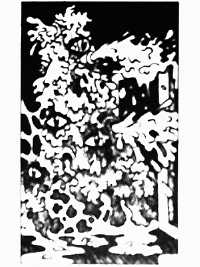 Juiblex has got himself some weird art, here. He is known as the Faceless Lord, "the most disgusting and loathsome of all demons." Adventurers can take damage from "the caustic properties of his noisome excretions."
Monster Manual 2

It says here that on Juiblex's plane there are slimes, deadly puddings, jellies, and various amoeboid monsters.

This adventure is nuts. Tons of info on the Abyss!

The Realm of Juiblex: "The nauseating stench of decaying matter greets you…" This place is filled with fungus and rot. It is sometimes known as the Amoebic Sea.
There’s some creatures here:
The Palace of Juiblex: The largest heap of decaying garbage in all the planes. It is guarded by an assortment of demons who fight each other. If the group gets inside, Juiblex attacks them.

It actually lists the treasure in Juiblex’s Palace. It includes an alchemy jug, pipes of the sewers and a talisman of ultimate evil.

They changed Juiblex’s stats. In the Monster Manual, he had 88 hit points. Now he has 176. 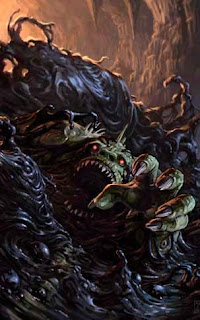 Juiblex is described here as a lesser god. He spreads disease and is beyond mortal comprehension.

Some aboleths revere him, because Juiblex is slowly revealing lost magical secrets to them and the aboleths believe that he keeps their skin moist.

There’s a mention of quintuplet tieflings who tried to use a building (known as "The Rotting Oracle") to channel information from Juiblex. The building sunk halfway in the mud and the tieflings disappeared.

Faces of Evil: The Fiends

The alkiliths are thought to be the creation of Juiblex.

There is a portal to the Para-Elemental Plane of Ooze in Shedaklah. The portal is a gelatinous orb 30 feet across. If you press a platinum disc to it, the portal activates. Weirdly, the person who activates it can't go through.

Juiblex has made an alliance with Bwimb II, the princess of Para-Elemental Ooze.

Shedaklah, the 222nd layer of the Abyss. The Slime Pits:
Dragon Magazine #337

The caverns under Shedaklah are a perpetual battleground of oozes and fungi.

You can sail the River Styx between the Slime Pits and the area of Shedaklah that Zuggtmoy rules. On the shore by the Slime Pits, the river jellifies with acidic and predatory slime. 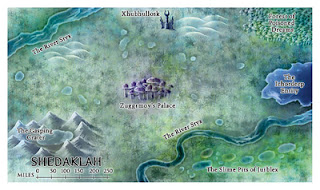 Juiblex's Grasp: There is one area of the Slime Pits that is a shallow bay of slime that covers a forest of mushrooms. The flow of slime can create riptides and undertows 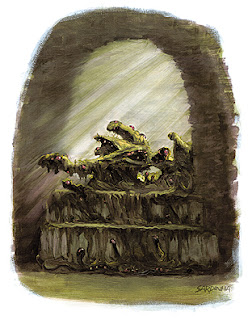 We learn all sorts of stuff about Juiblex:
Follower: We get details on Duvamil, a gnome that worships Juiblex:
Darkness Given Hunger: The largest black pudding known to exist, this hezrou fused with a black pudding has become the main servant of Juiblex. It patrols the Slime Pits. 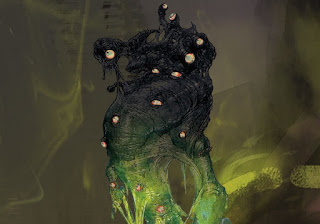 Some tidbits:
Tons of info on Shedaklah:
The Forest of Poisoned Dreams: This forest has tree-sized toadstools and its fungal blooms contain phantasmagoric psychotropic plants of legendary potency. When you take those psychotropics, you must make a saving throw or die.

The Ichordeep Entity: A lowly expanding strain of colonial algae that can use giant pseudopods to pull flying creatures down from the sky. Zuggtmoy may have no control over this thing.

The Slime Pits of Juiblex: Five bubbling slime-filled chasms that "erupt onto the surface of Shedaklah like pus from a broken scab."

Xhubhullosk: A mortal settlement! An assortment of lean-tos and rotting stalk structures. It is home to 400 people who became stranded on this layer somehow. Myconid servants of Zuggtmoy guard them and try to convert them into worshipers of Zuggtmoy.

Zuggtmoy's Palace: Her stinking palace is made from the largest fungi in the multiverse. It's four miles high!

Aspect of Juiblex: When he has to make an alliance with another demon prince, he sends an aspect along with a succubus for negotiations. They're guarded by two vrocks and two black puddings.

We actually get some major storyline developments.

Zuggtmoy created adamantine plinths and triggered a ritual meant to banish Juiblex to a different plane but it didn't work right. A portion of Juiblex's polluted form was sent to the Elemental Plane of Water.

This polluted a section of the Plane of Water and created the spawn of Juiblex there. Those creatures eventually were banished themselves by denizens of the plane to a demiplane of filth. This demiplane is a forest with ground of pulsating slime and streams and ponds of reeking watery goo. There's a green sun and great clouds of insects in the air.

The Hermit: At the center of the demiplane of filth is a monolith that has a hut on it. That is the home of The Hermit. The Hermit was made from a single shard of Juiblex's essence and he knows a lot about the multiverse. He's an avatar of Juiblex.

When he talks, green slime leaks out of his mouth and devours his body, but he is reborn somehow. 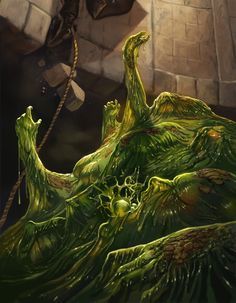 This issue has an an adventure called Caverns of the Ooze Lord We get some details on what a shrine to Juiblex is like.

There is an old cleric named Morbion who lives in the woods and is obsessed with slimes and oozes. He explored the "Sickstone Caves" where he found an olive slime, which turns those who touch it into olive slime. He's been infecting villagers with olive slime, which slowly turns them into slimes.

Olive Slime: An immobile ooze that attacks with tendrils that cause paralysis. It grows in the flesh of those it touches.
The cultists get a victim, stick them on the altar and pour the olive slime in its mouth. Once the victim is infected, the slime exits the body and goes back in the urn.

Second Shrine to Juiblex: The walls glow with silver green radiance. The floor is a mire of ooze and slime. The walls weep a dark green liquid that runs down in rivulets.

The altar is made of glowing green stone. Four black candles burn with lurid green flames.

Titles: He Who Slithers, the Unnameable One, Glistener, Indescribable Darkness, and the Slick of Foulest Humors.

Dagon and Pazuzu think that Juiblex was an obyrith that Tharizdun shattered, but this is not true. Juiblex was an infection in a wound of the Elemental Chaos, a mass of gel stirred into awareness when Tharizdun lodged the seed of evil into the Abyss.

Juiblex witnessed the formation of the Abyss and the battle between Tharizdun and the obyriths. Juiblex knows the true name of each obyrith! Wow, that would include Pazuzu and Obox-Ob.

Juiblex has slimes everywhere, in every realm. He ha so many of them that he cannot command them all. He is slowly accruing power and once he has enough, "the cosmos is doomed to drown in his putrescence."

Juiblex has the ability to possess oozes and transform them into an aspect of Juiblex.

Shedaklah Notes: The pits contain lakes of slime. The oldest of these lakes is called Suppurus. It is 100 miles across.

Juiblex has a sort of throne room. There is a cracked stone pedestal that he perches on. It’s pretty shabby.

All of his humanoid servants are touched with disease in some way.

Ooze Scion: A minion. When it is hit, roll a d20. on an 11 or higher, it takes no damage and a new ooze scion appears next to it.

We get stats for Darkness Given Hunger. It is the mightiest ooze next to Juiblex. When it is dropped to 0 hit points, the ooze is destroyed and the hezrou inside of it stands up and attacks!

Spawn of Juiblex: When these slimes die, they are reabsorbed by Juiblex and are born again. They are living extensions of Juiblex. Aboleths and otyughs are drawn to them.
The Plane Below

Wow. There's a whole thing in here. Juiblex has apparently acquired another layer of the Abyss.

Thullgrime: A town in the twisted tunnels. It is home to cultist explorers, wererats and "disease-riddled consumptives." In some places, the ground is alive and drags creatures below. Eventually, their bones bubble up to the surface.

The place is ruled by Cullis Heartrend, who is served by a creature known a the Grollog, a huge amorphous beast with dripping pits for eyes. It is somewhat intelligent and can communicate in broken Abyssal and Common. Nobody knows why it serves Cullis.

Juiblex's Shrine: Worshipers come here to pay homage. The shrine is said to hold uncounted riches beneath it. Followers have been tossing offerings into the slime for centuries.

The Maw of Eternity: A cavern with a 15-foot-wide hole in its center that is said to be a bottomless pit. When you jump in, you fall for ten minutes and pass through an unpredictable portal that sends you to a random layer of the Abyss. Sometimes it sends creatures beyond the planes entirely.

Molor is linked to Shedaklah through a number of portals.

Out of the Abyss 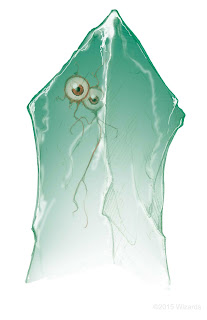 This 5e adventure has got a lot of Juiblex stuff in it.

The Oozing Temple: This place is a forgotten temple that is home to servants of Juiblex. There is an intelligent gelatinous cube here name Glabbagool and it can speak via telepathy. Juiblex's arrival in the Underdark has granted it sentience. It might join the group as an NPC sidekick.

The Pudding King: A deep gnome who lived among oozes. He named some of them. Princess Ebonmire is a black pudding and Prince Livid is a gray ooze.

When Juiblex arrived in the Underdark, he threw himself down and pledged loyalty. Juiblex gave him the power to command and summon oozes. He summons oozes to The Pudding Court and prepares to overtake the settlement of Blingdenstone.

The Fetid Wedding: In this chapter, Zuggtmoy is going to merge with this thing called Araumycos and become very powerful. Juiblex and the heroes can stop her.

Spies: Juiblex has two black pudding spies, which is weird.

A very handy rundown of Juiblex's history in D&D.
Posted by Sean at 12:56 PM

Nice guide. Juiblex has always been my favorite demon lord.

FWIW in the Gord the Rogue books, Juiblex is allied to Zuggtmoy.

Great read! Jubilex is one of my favorite lords, so this will come in handy!

The Jubilex shrines are nice to know for future use. I was aware of the Spawn of Jubilex in the Plane of Water, but I didn't know they were banished to a realm of filth. Bwimb II being an ally of Jubilex is nice to know, for future story potential. Duvamil provides story potential as well. Perhaps she could be the wife, daughter or even mother of the Pudding King in OotA. The stuff on Shedaklah is useful as well.

Overall, nice compendium of Jubilex lore. Thanks for the compilation!

Excellent article. Thanks for listing the sources.

Been looking for something like this for years. Thanx