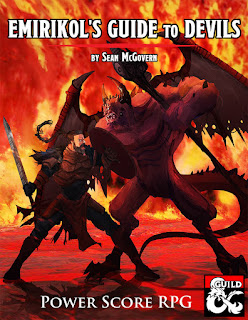 You can get Emirikol's Guide to Devils here. This is a shill-y post, so put on your lanyard, hit the sales floor with me and don’t forget to upsell batteries.

This Will be Easy!


You might remember that I wrote some guides to Hell about 6 months ago. The guides were to the Nine Hells, devils and the archdevils.

I thought to myself, “Hey, it would be cool to make a book out of this material. It could be like the 3e Fiendish Codex II, except for 5th edition!" Sounds fun!

I thought it would be really cool to try to take all of the lore from every edition and fit it into one big continuity. I wanted to explain why erinyes are so different in each edition. I wanted to come up with a cohesive backstory. I wanted to work in Erin M. Evans Brimstone Angels stuff, because it's awesome. I wanted to make a full picture of Hell, everything included.

You don't need to dig up issues of Dragon from 30 years ago. It's all right here, updated and organized and 5th edition-ized.

Then I said to myself, “This will probably take 2-3 weeks.”

6 months later.. it’s done. It was a lot more work than I thought. I had to drop my online games to get this done. That's horrible, because every single player was awesome and I feel like I’m losing out on a good thing. I just didn’t realize what a commitment this kind of thing is.


So I’m just going to talk a little a bit about what I learned about writing a D&D sourcebook.

The thing that ate up the most time was the technical stuff. Learning the arcane functions of libreoffice was maddening. You want to add page numbers? Where’s the page number button? Oh, there is none. Just click Page > Paragraph >Text Flow. Text flow! Very intuitive! So easy to figure out! Text flow, of course!

Formatting a page is very tricky. Once you’ve made a draft and you edit it, everything gets moved around and the images end up in weird places. You can anchor them to a page or a paragraph, and it makes a big difference which you choose.

I had to learn a lot and it took a long time.


I did this book in the style of Volo’s Guide to Monsters. In Volo’s, two ‘famous’ D&D NPCs make comments throughout the book. I decided to do the same, but with different ‘famous’ D&D NPCs. Emirikol the Chaotic and Natasha the Dark, stepdaughter of Baba Yaga and the person who may secretly be Iggwilv the Witch-Queen.

I was trying to figure out the tone. I am very joke-y. So I sat there, literally cracking myself up with the goofy comments I thought of. If you could see me writing these things, you’d probably think I was a crazy person. I find myself hilarious, I'm like my own Will Ferrel.

Should it all be jokes, though? I got to a point where I was reaching and struggling for goofy gags. I decided to delete all of the moderately crappy ones and added in quotes from old products, and ideas I had that I couldn’t fit into the book for whatever reason. That worked much better.


By far, the biggest thing I learned from making this product is that I love ordering D&D art. It is so much fun. I send a sketch to some guy in Romania, and a few days later I get a piece of art that I couldn’t have imagined beforehand. I love seeing different people’s interpretations of D&D NPCs and monsters.

Sometimes I’d get one that was not so great. Usually that was due to a miscommunication, as a lot of these artists don’t speak much English. But what I found was that I enjoyed the “bad” ones just as much as the good ones. The whole thing is fun.

I also learned that most artists are better at some types of subjects than others. Some are awesome at magic items, but maybe not as good at monsters. Some do really awesome ladies (almost every artist is good at drawing beautiful women, I found).

I have one guy who is an architecture student. I had him do a city and sent him my crappy sketch. He turned it into something that blew my mind.

Worse, some artists try to use photos of faces and they paste them on the characters. It sticks out like a sore thumb. It’s insane.

In the beginning it was a lot of trial and error, and eventually I nabbed a small core group of artists who were just pumping stuff out for me. Some of them were doing one monster per day.

On the images I'm showing in this article, I put links to the artists contact pages. In the credits of this book, I put links to everyone’s online presence. You can get art of your character for an incredibly low sum of money. It’s amazing. I am hoping people will check them out, as I love the idea of getting them more work.

The artists whose name come up over and over in the credits deserve more, in my opinion.


Making stat blocks was another thing that took me time to get competent at. Most of these monsters are high level. I mean, Asmodeus is about as powerful as Demogorgon.

In the beginning I kind of messed up. I didn’t give the devils some of their basic traits and all sorts of other stuff. So, about 1/3rd through the process, I had to go back and fix them all. That ate up some time, too.

The artist above who did Asmodeus is incredibly dependable. He lives in Venezuela, which right now is in tremendous turmoil. He is a great dude and I hope he ends up somewhere safe where he can pump out art and make some good money.

One thing I’m a little worried about is just the fact that I’m writing about devils and angels. It’s a bit of a controversial thing and there were one or two ideas I had that I actually took out because if you look at it from a Christian context, it’s pretty awful. I decided to try to err on the side of caution.

A few weeks ago, this adventure I wrote on the DMs Guild was put in a sale bundle. I didn’t really think too much about it. But when it hit, it was a real shock. That bundle sold thousands of copies! I suddenly got a pile of emails asking me where the sequel was!

The Castle of Corellon is the beginning of an adventure path. When I put it out, it didn’t really sell that well. At least, not in comparison to the guides.

It didn't seem like it was in that much demand, so the path wasn’t a priority. But now it is! I’m going to dive into that and order me some more sweet art of orcs, elves, oozes, displacer beasts, all sorts of cool stuff!
Posted by Sean at 7:42 AM

I'm really happy you're seeing some success on the Guild. Your campaigns have been creative and just plain awesome dating way back, and most impressively that you've gone to a lot of effort to communicate all that goodness to us other enthusiasts. It's therefore great that all that effort has at least given you a little shot in the arm, a little reward over and above the benefits of a hobby. Hoping you keep it up for us all!

I will pick this up right now.

ok this is awesome!

Hulu is one amongst the foremost common streaming services, hulu.com/activate holding you watch movies, shows, live matches, and on-demand tv. hulu.com/activate the appliance provides additional importance to originals and new TV shows than to documentaries and flicks.

Amazon Prime TV, and MyTV code. To register your device on the Amazon website you go to our website and enter the given code. The program requires the customer to have an Amazon account and a streaming device or TV. Amazon Prime Video is available on almost all streaming devices like Roku, Amazon Fire TV, Chromecast. For this, you just have to go to Amazon amazon.com/mytv with the help of the amazon activation code. You can visit our website for details of the entire process. You can do this by installing the amazon.com/mytv Video application on your smart TV, or the digital media player or video game console connected to your TV by visiting the link provided by us in the de cription.or more information, you can contact our team at Amazon.com/mytv and get more and more information.