On June 2nd and June 3rd, the Stream of Annihilation will be up and running. This is an official D&D event where a bunch of different groups will be playing through adventures linked to some mysterious story. It sounds like the waffle crew will be doing something at this thing!

I am going to try and cover it as best I can, and I think I’m going to be tweeting during the whole thing. I’ll do my best to let you know what happens and hit you with the highlights.

This event, I think, launches the new D&D storyline. I have my fingers crossed that it involves Planescape. I think this is the project that included the contributions of Pendleton Ward, the Adventure Time guy.

Last Time: The group beat up some drow and forced them to surrender. The heroes are getting ready to draw out the fire giants so that Diath and Kozin can sneak in to Ironslag and steal Maegara, the fiery primordial, so that the giants can't use her to create the rampaging colossus known as the vonindod. 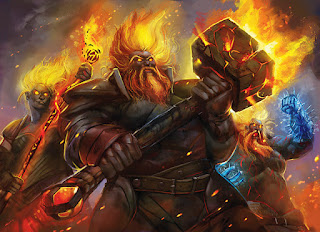 Evelyn politely welcomes the drow to the light, and offers to take their things. The drow had the iron flask, but now it belongs to the Distraction Force.

Strix loots a staff with a spider on it. It is sticky. Strix is very into this thing.

The group learns that this delivery was a test for the drow leader. If she had failed to deliver Maegara, she would have been turned into a drider. But she succeeded, much to the disappointment of Kozin.

The dark elves call Kozin a traitor and inform him that Lolth sees all. He asks them, "Does Lolth see this?" and he kills one of the drow with his dagger.

The group asks the drow for some information about the items.

Then, the drow leader Vireth teleports onto a wall about thirty feet away from the group. She casts fly and starts to take off.

Evelyn hucks a few javelins at her and misses. Strix starts looking through the drow spell book and sees that it has a lot of new spells, including greater invisibility and cloudkill.

Diath flings daggers and rolls well for once! He does a pile of damage to her. The drow is still alive but she’s wounded badly.

Kozin tries to get the dao to help, but the drow gets away.

It is time to execute the plane. Strix casts fly on Diath and he flies down the shaft with Kozin. This dynamic duo creep around, looking for a place to hide until the Distraction Force forces a distraction.

Outside, the dao points out that while he was chasing the drow, he found Harshnagg's axe. Hmmm. The group sets up at the door. Strix creates an illusion of a short frost giant and launches a fireball at the front door. The sound reverberates throughout the complex.

It works. Duke Zalto, a bunch of fire giants and hell hounds emerge from the doors. Paultin gets mauled by the hounds. Strix casts polymorph on the duke. It works! Duke Zalto is now a chicken. 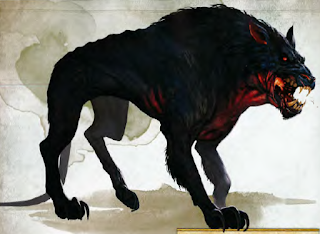 Down in the forge, Diath approaches the furnace. Through the grate, he notes that the fire is so bright that he can't look directly at it. He senses a pair of malevolent eyes in the fire.

Diath speaks the command word to activate the magic iron flask. Maegara gets a saving throw. Jared is freaked out... Maegara fails the save! Maegara is in the iron flask.

Evelyn summons Mourning Glory, her horse, in a dazzling display that includes a speech and a wink. Mourning Glory's job is to distract the hell hounds. It works. The hound are chasing the horse.

Diath realizes that there are a lot of slaves in Ironslag. Kozin doesn't want to bother with them. Diath decides that he needs to go and try to free them. Kozin takes chicken-Zalto and leaves Diath to his fate.

Evelyn activates her armor of invulnerability. The hell hounds breathe fire on her, but it does no damage. Evelyn sarcastically pretends to be hurt. Anna has been hilarious from the first second of this episode.

Kuharik, the dao, wants to go find the golem. The group hates this dude and kind of shrugs it off.

Paultin ends up thunderwaving Evelyn and the hell hounds. Evelyn takes no damage, but goes flying with the dogs.

Diath finds a bunch of prison cells, each affixed with a giant-sized lock. To pick the locks, he'll have to stick his arms in them. This will take a lot of time.

Is there a key around?

Ohh boy. Diath decides to free Maegara. I believe he can control her for one hour. She's gigantic. 50 feet tall! Diath burns and all of the dwarves die. The cells melt. Yeargh!

That’s where we stop.

Very fun episode! Lots of action, lots of humor, just as I like it.
Posted by Sean at 9:37 AM

Hope you plan on stopping by Chris's AMA on the subreddit on Friday! It's going to be at 1PM PST.