It has been a busy few days, intrepid explorers! I ran my D&D Next game on Sunday night, and Dungeon Crawl Classics on Monday night.

I watched season one of True Detective. It was getting hyped up by a lot of people so I figured I'd try and jump on the bandwagon. It's ok. I don't want to spoil it, but they set up a lot of plot threads that do not get paid off. Even though there's only 8 episodes, the show feels more complicated and meandering than it needs to be.

I've also been watching a lot of zombie movies. I do not have my finger on the pulse of our culture, so I couldn't tell you if zombies are considered played out at this point of time (Though I'd imagine World War Z was a strong "jump the shark" indicator). I do hear a lot of groaning about The Walking Dead and how it peaked in the very first episode. I don't know, I don't really care about TV and movies like that, except when it comes to Mad Men. Pete Campbell is my hero.

I have this dream of running a D&D zombie campaign. You know, the usual situation where you wake up and half of your neighbors are zombies - but I want to do it in a fantasy world. Maybe some powerful necromancer casts a spell to kick it off or something. That would be fun.

Each zombie movie has their own version of zombies:

Return of the Living Dead 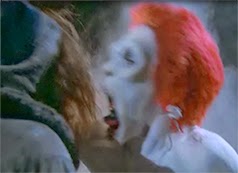 The history of these films and George Romeros' is pretty interesting. Romero went for more of a satirical approach in his films (I still find it very amusing that zombies are naturally inclined to go to the mall). These "Return of the Living Dead" films are more comedic and fun.

The zombies in this movie are very different than I expected. For one thing, they can talk. They are somewhat intelligent. The premise here is that the living dead are in constant pain, and the only thing that eases the pain is to eat brains.

This movie has a very iconic pink-haired woman who I immediately stole for use as an NPC. There's also probably the coolest-looking zombie I've ever seen on film. It's this weird tar-covered skeleton creature. It looks really freaky. 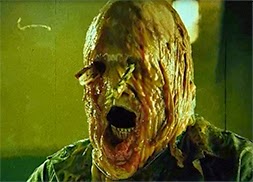 This is one of Robert Rodriguez's grindhouse tribute films. The "scratchy film" effect gets real old. And man, I hate seeing Quentin Tarantino act. I like some of his movies, but I do not want to see him on screen. He is not nearly as clever as he thinks he is.

The zombies in this one are created by infection. They are covered in pus-filled boils. I didn't really care for these zombies at all. I like the "walking corpse" type. The boils don't add anything except a bit of a gross-out factor.

The movie does have some amusing NPCs in it. The stripper-with-the-machine-gun-leg is kind of cool. Actually, syringe-specialist-nurse-bisexual-mom kind of steals the whole movie. 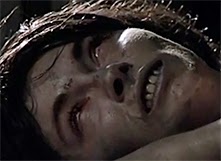 Do not watch this film if you are squeamish! If you don't like A Clockwork Orange, you won't like this. I probably would have turned it off if I didn't know what it was about ahead of time.

The zombies in this one do not care who you are - they will eat you. It can lead to some very interesting twists. I do appreciate this film's cynical, depressingly realistic outlook.

As far as RPGs go, Dungeon Crawl Classics does some cool things with their monsters, but they don't do much with their zombies. Heck, ghosts have a cool chart and zombies get two paragraphs.

D&D Next zombies are actually really cool. They basically get a save when they should be dropped to 0. If they make it, they have one hit point. This is scarily effective and gave my D&D Encounters group big problems a few sessions back.

Speaking of Encounters, I'll be running that tomorrow. I guess I better start wading through that pdf.
Posted by Sean at 8:59 PM