The Best D&D Adventures of All Time Part 1 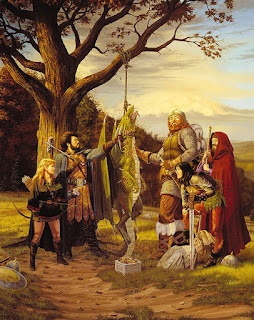 I just finished running the DCC RPG adventure Intrigue at the Court of Chaos and I have decided that it is one of the best adventures I have ever run. It's fun, it's creative and it is pretty much everything I want in a D&D adventure.

This got me thinking about where it would rank amongst my very favorite adventures. I've decided to compile a list of my favorites to present to you. This compilation has got about 10 or 12 entries, so I've decided to present them roughly in the order of oldest to newest.

Some of these are not technically "D&D" modules, I just call most fantasy stuff "D&D." Some of these are supplements with more than one adventure in them. All I care about is good, exciting ideas. It's so rare for me to actually enjoy reading an adventure. Usually, it is a chore! These are the exceptions:

White Plume Mountain is a "funhouse" dungeon full of inventive encounter areas and iconic magic items. I ran this when I was a kid and butchered it. I was able to redeem myself by running it for 5e in 2014. The dungeon is hilarious and I can't get over how it is only about 14 pages long yet it took four sessions to get through! My favorite parts:
Five Coins For a Kingdom 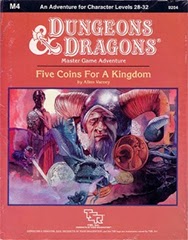 All right, hold on to your face. In Five Coins for a Kingdom, your home city is suddenly torn up out of the ground and begins hurtling toward the sun! To save it, you have to collect five magic coins and travel to an outer plane called "Eloysia," a plane full of matter known as the plenum. There are air bubbles in the plenum, where there are floating islands that people live on. You can travel between them by riding 300 foot long fish called auratas. You can direct an aurata to move by stomping on the back of its eyelid.

Anyway, some islands are chained together by massive miles-long chains. Your PCs lead an army into battle on one of these chains!

This is the most epic thing ever. 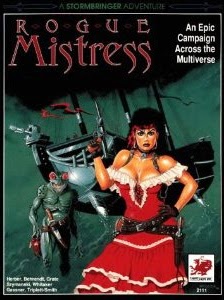 is an entire campaign made for the Stormbringer game. I had no trouble converting it to Spelljammer. It does suffer from a bit of railroading and an annoying super-npc who steals the focus from the players, but any DM can fix that. Let me list some of the insanely awesome things in this book:
To be perfectly frank, this is probably my absolute favorite RPG product of all time despite the fact that I don't even play Stormbringer.

Bane of the Shadowborn (From Dungeon Magazine #31) 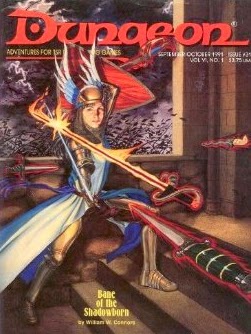 Bane of the Shadowborn

is set in the demi-plane of Ravenloft. The heroes must collect four keys, each tied to an element, to free the spirit of a woman named Lady Shadowborn from the grip of an evil sword called Ebonbane.

This one gave me another popular lasting villain for my campaign, and a player of mine ended up creating a descendant of Lady Shadowborn as a character that had a very memorable run.

Ebonbane can create symbols, is a +4 vorpal sword, it can control the weather around Shadowborn Manor, and it can animate blades. It can actually turn the group's weapons against them!

This was a great adventure that had a huge impact on my campaign world.

A Dozen and One Adventures 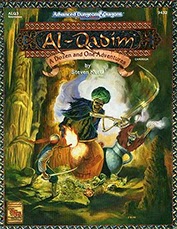 Al Qadim is a sorely under-rated setting. The A Dozen and One Adventures boxed set gave me so much more quality material than in any other product I've ever bought. I actually had to buy a second box of this because I used the books so much that they were falling apart. Here's some of the greatness:
It is insane how much awesome material is in that box. I ran an entire campaign based on it and I used maybe half of what was in there.

Dawn of the Overmind 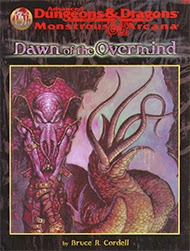 This is the third part of the Mind Flayer Trilogy, which was pretty much awesome from start to finish. It is linked to The Illithiad, which is in my opinion one of the best sourcebooks ever. The mind flayers are draining the power from the sun and the adventurers must travel to a world ravaged by the mindflayers to stop it. There is a ton of great stuff in here:
It is unreal how many cool concepts Bruce Cordell came up with for these adventures. The entire trilogy is grossly under-rated.

Believe it or not, we haven't even finished 2nd edition yet! Soon we'll rank the rest of 2e and then get into 3.5, pathfinder and of course my beloved 4th edition (yes, there were good 4e adventures, you scallywag!). Click here to continue to Part 2.
Posted by Sean at 11:25 AM

Wow, great list, I own and have used all of them, save "Five Coins for a Kingdom."

I agree with your choices.