The D&D Next Zombie Dragon

I called Wizards of the Coast today regarding my game store's D&D Encounters situation. As I mentioned in a previous post, the store did not sanction this event through the system, so we received no materials for it. I bought the .pdf out of my own pocket. Apparently, if this had been sanctioned, we'd have been sent a code to download the .pdf at no cost to me.

That doesn't bother me all that much. I don't mind buying the .pdf. I like to support wizards. But seriously, I want my free dice and whatever other swag they would have sent!

So I called wizards and talked to a nice woman. Basically, there is no way to properly go back and sanction these events. She said that I could make some files, export them and email them to wizards for them to manually enter them in a roundabout way, but it sounds like even that would not set us up in an official capacity. Basically, our store just plain missed out. Until the next season starts, I'll be reporting these as if they were random homebrewed games run in the store.

I tried! At least I got Dead in Thay set up.

Tonight I am running my zombie adventure. I have cooked up a 5e/D&D Next Zombie Dragon. I am using ideas and stats from the D&D Next playtest white dragon, and the "Winged Putrescence" zombie dragon from the 4th edition Draconomicon.

Looking through my old 4e books is very eye-opening. There's such a laser focus on cool encounters. It's so helpful to me, as encounter design (and specifically, "boss fights") are one of my weaknesses as a dungeon master.

I was also looking through my Dungeon Magazine .pdfs from the 4e era. There's so many adventurers I skimmed through and never looked back on. I don't even remember many of them! There's a heck of a lot of material there just lying dormant. 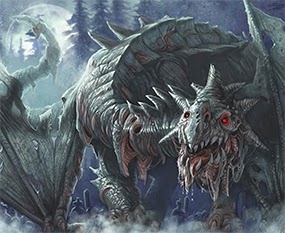 This monster is made to battle very low level characters. Once I run it I can decide if any of the stats need changing. I may edit this post and update it tomorrow with notes on how it went and to change the stats for a final version.

Anyway. Here it is:

Brittle: When a PC scores a critical on the Zombie dragon, a body part is severed. Roll a d10 on this chart

Multiattack: One bite, one claw.

- The Zombie Dragon is a bit more intelligent than a typical zombie. It is driven by hunger for brains. It can speak a few words here and there (mostly it says "brains" in draconic, which is "shishini" according to this site).

- It is smart enough to learn things here and there, and maybe ever detect an ambush or trick.
Posted by Sean at 5:37 PM