The Life and Times of Warduke 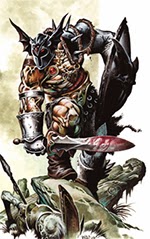 Warduke. He's a mysterious bounty hunter with a kewl helmet and glowing red eyes. What is his deal? Where did he come from? I first was exposed to him on the '80's D&D cartoon. I had his action figure. He was cool.

I spent some time digging up all the info I could find to try to present a clear picture on what is, to me, an under-utilized NPC in the D&D canon. Maybe he's not as popular as Drizzt, Elminster, Tiamat or Orcus, but he definitely deserves the spotlight in some kind of adventure or supplement.

Warduke captures the Dungeon Master (who later indicates he allowed himself to be caught). Warduke takes ol' DM back to his slaving operation located in a stinky, monster-faced cave. He wants to sell Dungeon Master to DM's enemy, Venger. Warduke seems to command an army of bullywugs, orcs, and maybe one stone golem (?).

Warduke doesn't do much of anything on this show except use his sword's ice power. In every subsequent book and appearance, it is claimed that his sword has a magic fire property, not ice. I don't like that. The ice was more interesting to me.

The cavalier is quite a jerk in this episode. He ditches the party. Then when he accidentally gets back with the heroes (literally falling through a hole on to Warduke), Uni the unicorn knocks him into a pool of water and everybody laughs at him.

The best part of this episode is when the heroes rescue the dwarf slaves, which consists of the ranger going "come on guys!" and the dwarves slowly walk through a hole in the wall, somehow unchained and unnoticed by the orc slavers who previously were depicted as being 15 feet away from them. 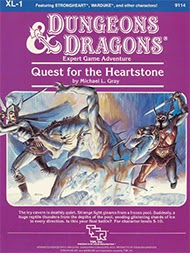 XL-1 Quest for the Heartstone

This adventure is about a stone that can tell a queen who to marry. Or something. The heroes are to go get it, pick the stone up with tongs, stick it in a lead box and bring it back. Along the way, they encounter lots of monsters and npcs who have action figures produced in conjunction with the cartoon.

They give you stats to play many of the action figures as your characters. There's good guys like Strongheart, and then there's bad guys like Warduke. You can even be Kelek, the evil wizard who was stealing unicorn horns and putting them on his magic statue! You can be that guy!

Warduke is presented as an 8th level fighter with an 11 in most stats. A 9 INT and a 16 STR. He has a sword +1 which "flames on command" (why??). His magical helmet gives him infravision and "causes wearer's eyes to glow red". Yeesh, kind of lame.

The stone is guarded by a random evil wizard named Dahnakriss. He somehow creates magic doubles of the PCs through the Heartstone. "Each character feels drawn to fighting his double. Characters cannot resist this compulsion...".

The doubles have the opposite alignment as the PC, and the module tells you that if the PC is killed, he/she now runs the double instead. Well, OK then!

Any character who touches the heartstone has the power of ESP. And yes, the heartsone is literally a red stone in the shape of a heart.

Get this: "The character cannot figure out any of the stone’s other powers." What?! Not cool. You didn't need to carry those tongs all the way here for this!

This book is full of NPCs with great names like Kimball Black, Quintain Valewalker, Ursula the Clever and Claudius Cloudgazer.

There's a note on wikipedia about the NPC "Peralay", who was originally Melf of "Melf's Acid Arrow" fame. I believe Melf was Luke Gygax's character in Gary Gygax's Castle Greyhawk campaign.

Anyway, in Peralay's entry, it says: "He and ZARGASH were friends, and found the Heartstone, which brought out ZARGASH's evil nature and PERALAY's lawful nature. Since that day, ZARGASH has tried to kill PERALAY several times."

Zargash is some evil cleric who hates the heartstone for bringing out his dark nature.

Warduke has the same stats as in the heartstone adventure. But he's also got a little descriptive text. It claims that the Heartstone brought out Warduke's evil side. He has a Nightmare as a mount! He calls his sword "Nightwind".

AD&D Storybook - The Forest of Enchantment

This one probably doesn't really "count". It's a kids' book featuring the villainy of Warduke and Kelek. I want to include it in this post because the book has a number of nice paintings featuring Warduke. There's not much to the story. Warduke and Kelek want to steal a gem and capture a princess. A bard and a druid stop them by entangling them in vines. 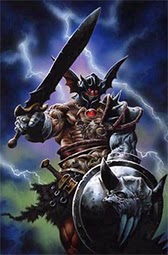 They got Wayne Reynolds to do two pieces of Warduke art for this. One is the cover! This version of Warduke is placed in Greyhawk. He works for the Horned Society, "a nation based on the adoration of foul beings from the Lower Planes". Warduke challenges their enemies in direct combat... usually right after they emerge battered and tired from a dungeon crawl.

He's an 18th level fighter with a +3 flaming sword (d'oh), and a fiendish eye graft. This red eye allows him to see invisible, and emit a fear gaze.

Warduke's Helm is a major artifact. If a lawful good creature puts it on, spikes grow from the inner surface of the helm and the face plate vanishes (yowtch). It gives you lowlight vision, a bonus to intimidate, immunity to charm, and two of the helmet's gems can cast death knell. The third gem can store a spell of up to 6th level.

A few years ago, I tried to use Warduke as an NPC in my Keep on the Borderlands/Chaos Scar 4th edition campaign. It was underwhelming to say the least. I just didn't use him properly, and while he was a "solo" monster, the PCs took him down too easily. He was downright forgettable. Someday, I'd like another chance to utilize Warduke as a truly feared villain.

Wizards did an article on Warduke on their site years ago that has some more info here.

I have my Dungeon Crawl Classics game tomorrow night. I should have notes on that for you tomorrow. We'll likely begin Intrigue at the Court of Chaos.

I wish Reynolds had taken note of Warduke's asymetrical design and realized the chain-armor side is the armed side and the bare side is the shielded side. Like Roman gladiators.

So few left-handed characters in fiction and Warduke's sole miniature was made right-handed because of his art. (the odd Liefeldian pose doesn't help though)

Notice that even in the old, canonical artwork included in the article his armored side is the same side that is shielded. There's really just the one black and white image of him that has the shield opposite the armored side.

There's also an image of him on the cover of the Heartstone module, which shows him wielding his sword in his left (armored) side. It's not just the one image as Unknown claims. I'd say that the older, canonical works should take precedent, as they came first. He should be wielding his sword in his left hand, armored side, and his shield should be in his right, unarmored hand. Not only does this make sense from an armor point of view (as Warfiend says), but having Warduke wield his weapon on the sinister side just makes more sense for that character. The devil's in the details!

First off, when I said "just the one" image I was referring simply to the images available to us in the article.

Your original contention was that Mr. Reynolds is the one who converted Warduke from a left-handed character to a right-handed character. While this is true it should be noted that the one older work you reference, "Quest for the Heartstone," (which incidentally is the source for "just the one" image I was referring to) is not the origin of the character. He actually debuted in the Dungeons & Dragons cartoon in an episode called "Quest for the Dungeon Master" (what is it with quests for things LOL) which aired a year prior to the publication of "Quest for the Heartstone".

In your favor, though, they partnered with LJN to release a line of action figures with the cartoon, and the Warduke figure's artwork used a color version of the image that would eventually be printed in black and white in that module so it seems like TSR either couldn't decide or simply didn't care whether he was right handed or left handed so it's probably a bit unfair to proclaim that Mr. Reynolds is the source of your angst when it's possible he was simply reverting Warduke to his proper "state" as it were. :D

I guess we're just going to having to agree to disagree on how Warduke should or shouldn't look.

At the very least, though, can we both agree that he *should* be decked out in that awesome blue armor and that the miniature in which he's basically just wearing brown is an affront to nature? ;)

I just read in Tabletop Gaming magazine that Warduke is going to be in Descent into Avernus.