What's the Deal with Rainbow Dragons

I am on a bit of a "whacky" kick when it comes to D&D. I am using modules that have stuff like ape heads that shoot lasers out of their eyes, fungus men, almost anything goofy and over the top.

So I decided I want to use a rainbow dragon in my D&D Next game tomorrow night. I envision the dragon as a friend of the heroes. Although, you never know what a character is going to do when you introduce an NPC. They might kill it, they might mutate it, or.. well... you know.

I have a couple sources of material on rainbow dragons. I've got Dragon Magazine #146, which has stats for a 2nd edition rainbow dragon. And I have one of my beloved Rose Estes D&D Endless Quest Choose Your Own Adventure Books - Revenge of the Rainbow Dragons. I googled rainbow dragons and see that there is a 3rd edition "prismatic dragon", so I'll look at that too.

The Dragon Magazine article (page 26) has a sweet black and white drawing by Baxa (very under-rated artist from that era, imo). The dragon seems to be breathing some kind of spyrograph effect, which is kind of hilarious. My intention here obviously is to make a dragon who breathes a frickin rainbow. What that rainbow does when it hits a target, I have no idea yet.

This rainbow dragon is evil (??) and 50 feet long. Its' hide displays "an everchanging display of iridescent hues of all colors". In bright light, its; hide sort of dazes enemies and gives them penalties to hit.

It can breathe 5 times a day. It's a rainbow 5 feet wide and 100 feet long that hits one target, and does the monster's hit points in damage! It is so bright that it may blind all others who see the beam.

They cast spells, and their blood are ingredients in scroll ink for spells like color spray, prismatic sphere, etc. For some reason they are resistant to electricity/lightning.

Some cool stuff here! I don't understand why they're evil. I guess maybe the thinking is that dragons were meant to be killed by PCs, and not many PCs are going to get into a fight with a lawful good dragon?

Our hero Jaimie, apprentice wizard, comes upon a crystal room where there's 5 eggs sitting in lava. The eggs are each a different color - crimson, lime, royal blue, apricot, etc. These are the eggs of a maroon rainbow dragon named... Maroon II. She was married to King Cobalt, also a rainbow dragon. They lived in a place called Rainbow Castle. Yeah. This is a kid's book, so...

It gets more goofy and Strawberry Shortcake-y when our hero comes into the lair of three rainbow dragons. In the lair are "nests woven of soft mist and a sprinkle of stars". These dragons harvest.. colors. In the caves are mounds of Horizon Blue, Storm Green, Moon Orange, Sun Gold, Dusk Purple, Twilight Indigo, and Radiant Red. When the storm is over, they grab a selection of each and "blow a rainbow across the sky".

This is definitely some Feywild stuff here. I think I will say that Rainbow Dragons live primarily in the Feywild, but this particular one in my campaign hangs out in a cave on the prime material to collect colors that are hard to find in the feywild, like Rusty Red and Urinal White.

How would a dragon harvest color? Do they hold out a claw and drain it into a clump?

These dragons cry crystal tears and say things like: "Fools that they are, they do not realize that a rainbow is far more precious, rare and beautiful than any earthly gem".

In this book, I swear, three rainbow dragons create a bridge from a limbo to "earth" by barfing up rainbows with some outrageously delightful flavor text: "Placing themselves before the piles of color, the dragons drink deeply until their cheeks bulge. Then, returning to the mouth of the cave, they begin to sway back and forth. And a soft, melodic humming, like the sound of sun shining in the rain, thrums from their lips. Wisps of color drift from Topaz and weave back and forth between strands of dew-drenched mist blown by Vermillion. Mingling with and binding their colors are those of their mother."

According to the d&d wiki:

-A prismatic dragon breathes a prismatic spray which fires off seven beams of light. Each beam has a different power/effect/type of damage: Fire/Acid/lightning/poison/turn to stone!/insanity/...SEND TO ANOTHER PLANE. It's a 60 foot cone, creatures hit are hit by "1 or more beams" (you can roll on a chart to see which hits).

- It is also protected by a shield of shimmering light like a cloak of chaos. The cloak is a random pattern of color that gives an ac bonus, spell resistance, blocks domination, and if a lawful creature strikes you they may be magically confused for one round.

- Immune to radiance and blindness

- Frightful presence - Wisdom save or frightened for one minute. The victim must move away from dragon.

This stuff is pretty high level and super-powerful. Not sure if it fits what I want. 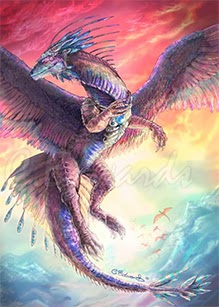 - She is here in my campaign world to collect exotic palettes of color and weird treasures to add to her hoard.
- She and her children can combine their breath weapons to create a rainbow bridge portal back to the feywild
- She can polymorph into a rainbow-haired elf, so that she can travel to cities in disguise
- She breathes the 3rd edition breath weapon

Chromakey, her daughter
- A RAINBOW DRAGONBORN
- She is a daughter of Prismala, and enjoys adventuring in the dungeons under the city, collecting treasures and colors
- She might make a good love interest for the party dragonborn, Moo Young
- Her breath weapon is color spray. 15 foot cone, all creatures save or roll a d6:
1-2 Slowed/disadvantage on attacks until start of next turn
3-4 On next turn can only attack a random target in range
5-6 Creature is frightened until end of next turn

- Piles of gold and gems, some +1 weapons (majority of hoard is in Rainbow Castle)
- Shinaelestra Chalice of Fellowship: Make a toast to allies' fair deeds, gain temp hp after a rest
- A variant Starglass Eye: A "window" which can be used to look into the corresponding/overlapping location in the feywild and the shadowfell
- A bunch of Rays of Feywild Sunshine: Creates a zone of bright light, lasts five minutes, restores plants to peak life
- And of course, nests woven of soft mist and a sprinkle of stars that contain bundles of collected color. Oh the other rainbow dragons in the Feywild will be so envious when they see Vomit Green and Armpit Orange.

If you have any cool ideas on rainbow dragons feel free to send them to me here.
Posted by Sean at 5:25 PM

How do you think that Renbuu, the Slaad Lord of Colors, would react to discovering that these kinds of dragons exist? Do you think he would want one as a "pet?" Maybe he would just want to steal it's color hoard instead!