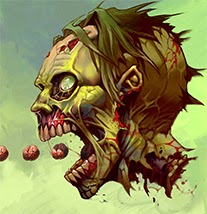 Tomorrow night I will be running my zombie adventure for my D&D Next campaign. Our heroes have just finished up the Dungeon of the Bear and are ready for their next challenge.

The scenario is simple. The PCs are looking for a bad guy. They track the bad guy to a village. The bad guy uses a ritual to unleash a zombie plague on the village. I want this all handled in a single session. It's a short tribute to all the zombie movies I've been watching lately, and then we will move on.

D&D Next zombies have a cool little mechanic. When they're reduced to 0 hit points, they make a CON save. The DC is 5 + the damage. If they make the save, they have 1 hit point. It works well.

But I decided to shake things up a bit. For this adventure, these zombies will operate using some of the rules in the All Flesh Must Be Eaten RPG. The PCs will have a choice - target the zombie's head (disadvantage to do so), or attack and roll a d10 on this chart to see where you hit the zombie:

The zombie doesn't die until a head shot reduces it to 0 hit points.

If a zombie hits a PC, they must make a DC 8 CON save. If they fail, they are infected! They will become a zombie in an hour or so.

The town is Duponde, which is the village from Dark Legacy of Evard.

Marshal Grimbold: Head of the town watch, he is based on the jerk military guy from Day of the dead. I will try to have him deliver a freaked out fantasy version of this speech: "I'm running this monkey farm now, frankenstein! And I wanna know what the fuck you're doing with my time. If we're just jerkin' off here, I'm gonna have my men blow the piss out of those precious specimens of yours and we're gonna get the hell out of here and leave you and your high-falutin' asshole friends to rot in this stinking sewer."

Brother Zelan: A cleric who will be a lot like the mad doctor from Day of the Dead. He's more interested in figuring out how the zombies work than turning them.

Krugan: The dwarf who runs the general store. He's a goof-ball worried more about his business than anything else, like the owner guy from Return of the Living Dead. I'm going to do a thing where this guy is known for making alchemist's fire, and secretly has a gigantic vat of it in his basement.

I'd also like a couple of "signature" zombies, like the tarman and the half-zombie lady from Return of the Living Dead.

I will have on that looks sort of like the tarman, but is shrouded in liquid shadow. He will be the corpse of Vontarin, the wizard villain from Dark Legacy of Evard, who cursed the town to slide into the Shadowfell. 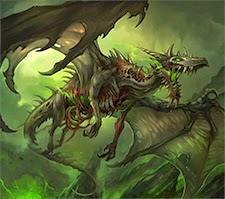 I found a cool image online of a zombie dragon. This is Dungeons and Dragons, right? And I wanted my heroes to face a dragon each and every level in this campaign. So zombie dragon it is! We'll say there was one killed decades ago by twon heroes and its' corpse decorated the interior of a hero's tomb or something.

Our heroes will have three objectives:

1. Obtain the symbol of light from the church. It has special radiant powers, and can be used to destroy the shadowstone, the item that has caused this plague.

2. Destroy the shadowstone with the symbol of light, which is held by the bad guy.

3. Stop the zombie outbreak! The best way to do this is to blow up the vat of alchemist's fire in the general store. This will cause a massive explosion that would destroy the entire town. They'll probably have to make a trail of flammable liquid to the outskirts of the city, which will be pretty epic to do in the middle of a zombie outbreak.

I'll be open to any other idea they have as far as defeating the zombies. If the heroes decide not to destroy every last zombie with an epic explosion, I'll have Lucinda the NPC insist on doing it with or without them. Then I'll roll for her to see if she succeeds or fails. Either way, she'll probably die. It'd actually be pretty interesting if she died.

I'll be running this tomorrow night. I'll let you know how it goes!