Why I Hate Being A Player 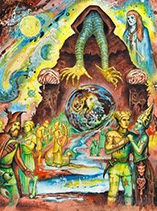 Hello chum! Is "chum" gender-neutral? Would a female chum be a chum-lette? I don't know. I have a few things going on. In random order:

2. I should be preparing for tomorrow's Scourge of the Sword Coast, but it is such a drag. I need to finish making notes on Julkoun and...zzzz... 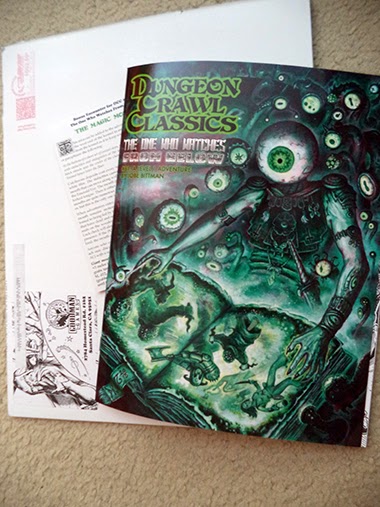 3. I received the new DCC RPG module, The One Who Watches From Below. I am very excited about it, and am very much looking forward to running it right after we finish Intrigue at the Court of Chaos.

4. It looks like we won't be playing DCC next Monday. One of the players can't make it and has asked me to "postpone" the session so he doesn't miss it. It is nice that the players like my game enough to make this kind of request.

Today I'd like to talk to you about myself and this blog. This blog is new, just a few weeks old. I started it because the movie theater I was a manager at has shut down. This has left me with a lot of free time. 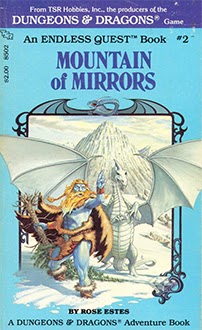 The name "Power Score" comes from a D&D 2nd Edition term from the Complete Psionics Handbook. In 2e psionics, if you need to roll a 13 to succeed on a psionics power check, and then you roll exactly a 13 - that's called a power score. It's like a critical hit, special things happen. So what happened is over the years in my game, whenever somebody would roll to hit and they'd roll the exact number they needed, I would say in a goofy voice that they just got a POWER SCORE~!

I got into D&D through friends, and through the D&D Endless Quest books. I only liked the ones written by Rose Estes. Mountain of Mirrors was by far my favorite. I am seriously thinking about converting it into an actual adventure.

Right now I am running 3 games and playing in 1. The one I play in is a D&D 4th edition game. I love 4th edition. We play maybe once a month, and it reminds me why it is that I hate being a player.

Don't get me wrong. I like the people in the group. And the DM is good! Heck, he had an article published in Dragon Magazine a year or two ago. His campaign story is really creative. I don't think I could come up with something so cool - the world is cursed so that the Feywild bleeds over in the day, and the Shadowfell bleeds over in the night. We heroes are trying to fix it. How cool is that?

And yet I don't care if my character lives or dies. I'll just make another one. It is so hard for me to get invested not just in this game, but in any game. Here are some of the main reasons why I hate being a player:

Sitting and Waiting For Your Turn: This is more of a 4th edition complaint than anything. But wow, a round of combat takes, no joke, 20 minutes? My turn takes 50 seconds because I know my character, I know my powers, and I plan my turn while other people are going. Some other players don't do that. Some other players, I've learned, can't do that. The situation on the map is fluid and they simply cannot plan until they know exactly who is where.

It is utterly excruciating sitting there and waiting while other people pore over their character sheet for 5 minutes as if they've never seen it before. We are 15th level. We started at level 1. While I sit there waiting, I lose all interest. I look around the room. I watch people. I inventory what's on the shelf across from me. I drink, I eat, I look at the clock. This is not my vision of high fantasy.

I Want to Feel Like I'm in a Novel: ...or a movie (and not a movie like Machete Kills... well, actually, maybe a lot like Machete Kills). I want there to be depth, and I want NPCs with realistic reactions and motivations. I want drama and laughter. I don't want a night full of rooms with three goblins in them.

There Must Be Danger: I love the tomb of horrors. I want to brave death traps. And the key to a death trap is the fact that you might die. If the DM is going to fudge it, and let you live when the dice say you're dead, I lose all interest. It's ok if I die! I'll make another character! If there is no real threat, if I am playing in a game where I'm just riding a train to level 20 and I know I'm going to live and succeed no matter what, then what is the point? I want adventure! I want peril!

It took me a very long time to realize that there are a lot of players who don't like this style at all.

The DMPC: What is worse than this? The DM runs a character. The character is super-awesome. The plot of the story revolves around the character. All the NPCs are attracted to the character, and of course the DM's character has kewl
magic items. And the rest of us are there, too. We're his Amazing Friends. These days, I ask a lot of questions before I commit to a group. If the DM has a character, I am not playing.

What I Do Doesn't Matter: This is the big one for me. I usually feel like what my character does doesn't mean anything. I'm going through a pre-planned scenario. I am not wandering a world where my actions have consequences. I'm politely playing with the DM's toys (his encounters) and putting them back when I'm done with them.

With most DMs, I get the feeling that if I were to go and do what I'd really like, that they would be upset or wouldn't want to go with it.

I once read a column by Monte Cook. He said that in a company he worked for (ICE?), the general feeling there was that modules were published because most DMs are terrible and need them to keep their games going. The idea in this column was that good DMs make their own material. This stung, as I always use modules. I love them.

A lot of my above complaints are things that I as a DM struggle with. I want my players to have the experience that I crave as a player, and often I feel that I fall short. But man, I would much rather run a game than play in one.

I agree with pretty much everything here. I usually run because I can't stand playing, and that makes me really critical of myself as a DM. I especially get the "my turn takes me 50 seconds" after waiting 20 minutes on other people. You mentioned somewhere else on your blog that you'd rather "just roll and keep things moving" than waste time looking up rules, and I hardly ever find players with the same mindset.
Anyway, really enjoying reading through your blog.

I love both DMing and playing! However, when it comes to modules, I think Monte Cook's former company had it exactly backwards, because in my experience most modules are so terribly written (or awkwardly arranged, or written too dryly) that they need a great DM to run them.

It seems like a shame too, because from reading your other posts (I've been reading them backwards through time) it seems like the ones you've been doing set up a great ongoing living narrative that I didn't realize was even a thing!

Bronk: Wow, thanks for taking the time to read trough all of these things. Reading through modules is a slog, but usually there's a lot of great ideas that I wouldn't have come up with on my own. Plus, I enjoy pulling out lore or magic items to use for my campaigns.