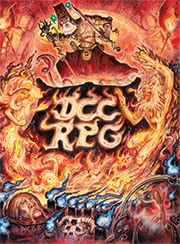 I am preparing for tomorrow night's Dungeon Crawl Classics game. If you've never heard of it, it's basically old school d&d that digs a little deeper into "Appendix N" (Gary Gygax's list of books that helped inspire Dungeons & Dragons).

This blog article will be full of art from the DCC book from one of my favorite artists - Peter Mullen. There's something really contemplative and inspiring about his stuff. He has a style all his own. This image at the top here is of one of the limited edition covers by Doug Kovacs. It's one of the best RPG covers I've ever seen. When I bring my book somewhere, everybody wants to see it and gawk at it. In my opinion, the DCC RPG book is worth owning even if only to stare at the art, which is on almost every one of its' 500 pages.

Tomorrow night, my players will be casting their Find Familiar spells. It takes a week to cast, and the caster must use his own blood/essence in the casting. The caster must drain 10 points from his Strength/Stamina/Agility. The points come back at a rate of 1 per day. This is known as "Spellburning". 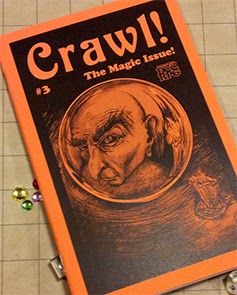 Assuming their rolls go well, they'll each get a little buddy. Having a familiar boosts the wizard's hit points. The familiar is completely loyal to the wizard and can communicate telepathically with its' master.

The wizard rolls on a chart to see what kind of familiar he/she receives. There's a different chart depending on your alignment (in this game, there's Lawful, Chaotic, and Neutral).

This familiar list is lengthened in an article in Crawl! Zine issue 3. Crawl is awesome and has a ton of good material for DCC RPG. It's also incredibly inexpensive. And on top of that, the zines get shipped in the mail inhumanly fast. It's win all the way around.

I am especially excited about the familiars because I like having NPCs to play. It's fun to have a little sidekick who can cheer the PCs on, heal them when things go bad, and provide clues or direction when the PCs are confused or floundering. On top of that, good NPCs help bring the whole campaign world to life. If you can get your players to care about their trusty sidekick, then you've got them invested in your game.

It is my theory that all entertainment is about getting people to feel something. I want my players to feel excitement, happiness, and most of all, I want them to have that feeling where you are reading a book and you should go to sleep but you don't because you just can't put the book down. An NPC is a fantastic tool in this regard.

I went over the list of familiars. It is inspired. A lot of them are "miniature such-and-suches". I guess that comes with the territory. I've compiled a top ten list of my favorites, because.. well.. I like lists. So here are the Top Ten DCC RPG Familiars:

10. Pseudo-Dragon - This is just a classic. He breathes fire, he flies around, he's a small dragon. I'd make him green, and not cute-sy. He's a dragon, just small, and of slightly higher than animal intelligence.

9. Floating Fist-Sized Crystal Tesseract - This is just... wow. How weird. A cool visual. It'd be higher on the list, but I can't think of much to do with it. Maybe you could store stuff in it? Or maybe you could go inside it, as if it was a Mordenkainen's Mansion kind of deal? Or Baba Yaga's Hut, which I believe actually is a tesseract. It would make for a cool base. Maybe the tesseract had a previous wizard owner who built a vast dungeon in there...

8. Miniature Lion With a Loud Commanding Voice - I immediately think of Aslan from the Chronicles of Narnia. I think I could do a lot of funny stuff playing this guy as a humorless, loud bastion of goodness. I would like to say in a booming voice: "You musn't poach the beggar's coin cup, Warrior! He nearly has enough silver for his ointment which he shall apply to his most unfortunate rash 'pon his unmentionables".

7. Miniature Minotaur - How cool. I read up on Minotaurs from mythology and I had no idea of their lewd origin. Basically, a woman fell in love with a magic white bull, made a fake cow, drilled a hole and climbed in. The bull had sex with the cow and thus with our lady friend. She got pregnant and gave birth to a minotaur. I am just reeling from the possibilities here.

6. Large Stained-Glass Butterfly - This is another cool one, but I have trouble thinking of interesting things to do with it. Maybe you could cast spells through it as if it was a prism, adding an effect of some kind. Or maybe when certain kind of light passes through it, the light becomes some kind of x-ray or beam that lets you walk through a wall or becomes super-hot or something.

5. Clawed Crawling Hand - I immediately think of a severed hand, maybe mummified. Of course, eventually you could have the owner of the hand come looking for our wizard. Maybe if the hand is re-attached, the owner absorbs the hand's experiences and knows everything the wizard had done, which could be good or bad.

4. Miniature Armored Knight With a Visor That is Never Lifted - He is Lawful. What a cool familiar. He could defend the wizard's honor and possess incredible courage. Poor guy would probably end up dying covering the heroes' escape from some hideous monster army. But they'd never forget him.

3. Miniature Woman of Extraordinary Beauty - This one is just full of possibilities. Obviously our wizard might fall in love with her, or vice versa. In my Al Qadim campaign from so long ago, there was a lot of great drama surrounding such a familiar. The 'wizard' in this case was a Sha'ir (a wizard who commanded genies). His familiar was a "gen", a little air elemental who would go to the elemental planes to steal the energy for his spells that he was going to cast. The players liked her so much that it bordered on awkward.

2. Miniature Version of the Wizard Himself Except Older - This is just epic. Is this little guy actually the wizard from the future? From an alternate reality? He can give our wizard sage advice, maybe even teach him spells or advise him on NPCs.

1. Floating Animate Grimoire - As soon as I read this one, it really grabbed me. Maybe it communicates by forming words in the book. Or maybe, the words are already written in the book. Maybe the book has the wizard's life story alredy written, from start to finish. Maybe this book was written by an enemy who sent it back in time to send our hero down the wrong path. Maybe the book has rituals that, if enacted, will send the wizard to the demi-plane it came from. Just a billion possibilities with this one. And aside from that, a big floating book is such a classic idea. It really should be a wizard's familiar.

We play tonight. I'll let you know how it went tomorrow.

Apparently D&D Next (I hope they just call it 5th edition) will issue a starter boxed set ($20) in July, and then put out a Player's Handbook ($50) in August. This sounds good to me. I love boxed sets, and it seems smart to put the core books out one at a time to get as much money as you can from each one. I think the core books are where most of their money is made, and I want them to make money and succeed, so I am happy with this. There's no hurry on getting all the rules, anyway. I have the playtest packets to fill in the gaps until all of the books are released.
Posted by Sean at 9:23 AM