On Breaking Bad and Being a Good Dungeon Master

We played Dungeon of the Bear last night. These players are fun to be around, so it was good - we hadn't been together for a month, so it was that much better.

There are a lot of things I am working on as a DM. One of the big ones is being a better storyteller. The main reason I've always used published modules is that I am terrible at coming up with my own adventures. I usually either run a path or combine a bunch of scenarios and link them with an over-arching plot.

Recently, I sat down and watched the entire run of the TV show Breaking Bad from start to finish. I learned so much about storytelling and about what a good story is from that show. It is pretty simple: Everything matters. Everything that happens should be followed up on in a logical and entertaining way. When something happens to a character (or NPC), he or she should react, it should have an impact. And heck, that person might bring it up again - it should inform their behavior from that point forward.

Your characters' choices matter. They impact the world around them. I think that is a key to a good campaign. It isn't easy. One important thing to do is, right after the session is over while everything is fresh in your mind, write down ideas for what comes next and logical reactions your NPCs would have. If you wait a few days, you will likely forget some things.

Another element that I am working on to be a better DM is this - keep it simple. Do not throw in too many elements or side stories to muddle up the storyline and confuse the players. In this campaign, agents of the god of night are underneath the city trying to use things in Thunderspire Labyrinth to subjugate the city. The god's agents are flameskulls.

In general, players need to be refreshed on what the story of the campaign is when they show up. It's usually a week or more since the last game and they have all sorts of stuff going on in their lives. Heck, I send them a detailed summary of each session and I don't think they read them most of the time.

That's OK. The summaries are more for me to look back on. So at the start of the session, I always recap and drive the main points home over and over. I go in assuming they know and remember absolutely nothing.

I'd also like to talk about DM style. In real life, I know some people who run their games from the seat of their pants. They "wing it". They make stuff up as they go. And they tell me one "secret" to making this happen is to listen to the players talk at the table and to steal their ideas. As in, a player goes, "Oh no, I think there's an owlbear in that room". And the DM decides, "OK, yeah, there is an owlbear in there".

Here's my main beef with that. Your players figure out what you're doing. They clamp up. They stop trusting you. The whole game takes on a "DM vs. Players" vibe. You've lost one of your main sources of story and you're left floundering at the table. You might even get into a situation where the players are steering you into easy fights (for example, a cleric's player suggesting there's undead up ahead, knowing he does extra damage against undead).

A guy who runs games in this style once boasted "In my games, if the players come across 2 doors in the dungeon, they can go in either one." I looked at him, having no idea what he was talking about. Finally, I realized what he meant was that he had a separate idea for what was behind each door. He had two ideas.

That just does not impress me at all. If you prepare ahead of time, you know what is behind every door! And you are not risking having a lame game if you can't think of anything good on the spot! I guess it comes down to a choice:

A. Make stuff up at the table, and spend no time preparing
B. Run a planned scenario, and spend a few hours preparing beforehand.

It's a no-brainer to me. I would be angry if I played a convention game, and at the end the DM revealed he had nothing behind the screen. To me, that's a rip off. You cheesed your way through it. Nothing mattered. And even if it was good, imagine how much better it would have been if you had put in some time and effort on it beforehand.

The other thing is, and maybe this is just me, but you can usually tell when a DM is pulling stuff out of his or her butt. And once you see what's going on, you are playing an entirely different game. There are no parameters. The game is now about the DM filling three hours, and if you've read the same books and watched the same movies as your DM recently, you're probably going to be able to guess what's coming.

I understand that part of the other side of this is that when you run a published module, your players have a choice of either doing what is contained in that module, or "breaking script" and forcing the DM to either railroad the party back in or to start making stuff up. 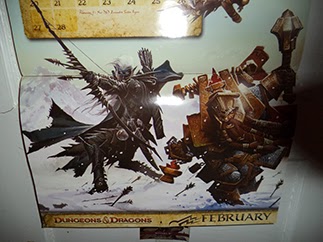 To me, therein lies the art of being a Dungeon Master. Sometimes, your players will throw you a curveball. That's when you are tested. You have a choice - shoehorn them back into that module or let them take off to parts unknown.

I say let them roam. That is when you improvise. Your players have to know that what they do matters. They need to feel like they are truly free to roam in the world you've created. This is their story. They are the protagonists. And their actions have consequences.

You should prepare for this. And you should prepare them for this. I have a "speech" I give to new players when we start a campaign. The jist of it is this: "I have an adventure. You can veer from it. If you do, I will go with it - though it might suck! And I might need to 'pause' the game for 5-10 minutes to work out some details."

You'd be surprised at how much you can come up with at the table while everyone takes a 5 minute bathroom break. You're a DM. You are creative. You just follow their actions logically in as exciting a way as possible. Try your best not to just fill the rest of the session with long drawn-out fights to kill time.

At the end of each session, I ask the players what they want to do the next time. I write it down, and I prepare it. Players are so happy when they are in a game where their actions truly matter. Where they are the stars.

Being a DM is really, really hard. As they say in Knights of the Dinner Table, "Many are called. Few are chosen". You put in hours and hours of thought and hard work on all sorts of weird material that could get turned upside down in 5 minutes. And when a session sucks, it really stings. You feel like you failed.

So I suggest that every time you play, every hour of game time, while the players are planning an attack, or splitting up loot, or eating chips or telling a joke - sit back and look at them. Look at how engaged and happy they are. You gave them an escape for a few hours. You are entertaining them. They come back, once again, for your game.

That is why being a Dungeon Master is awesome. These people chose your goofy adventure over a movie with a million dollar budget, or an insanely great video game, or a landmark series of fantasy novels. Your reward is right there, every single time they show up.

Whew... got that off my chest. This campaign will involve the following adventures, converted to D&D Next rules, not necessarily in this order: