Dungeons & Dragons - A Guide to the Raven Queen

In this guide, I am going to attempt to collect all of the relevant information about the Raven Queen and put it here as a resource. It should be a nice outline and launching pad for dungeon masters who want to use her in their campaigns.

Players Love the Raven Queen: Over and over again in my games, people choose her as their patron deity. She is the goddess of death, fate and winter. The lore is spread out in a number of 4e books and she was recently updated in 5th edition. I decided to grab it all and put it in one concise blog post both for my own edification and for your convenience should you ever use her.

I'll list the source and the information gleaned from it. There will be some overlapping and combining, as multiple sources tackle the same subjects. These are the publications I drew from for this article:
Dungeon #171

The Raven Queen was at one time a mortal sorcerer who died from the plague. Nerull, god of the dead was attracted to her spirit and ended up marrying her. He called her Nera. After a length of time, Nera gained power and actually overthrew Nerull. Here's a quote: "Other than Vecna, she is the only known deity who attained divinity after her mortal death".

Other things we learn:

She Favors Certain Followers: She watches mortals of interest. She can delay death if a PC agrees to be bound to her. From that day forth, once per encounter when an enemy hits the PC, The Raven Queen makes it a critical hit (!). This continues until the PC completes a task for her, such as taking down a cult of Nerull or dealing with a scheme that involves Orcus.

The overarching plot in the 4e HPE "adventure path" is that Orcus, demon lord of undeath, wants to kill the Raven Queen to take her place.

Summoning the Raven Queen: The PCs are given a ritual scroll: Summon Raven Aspect. This actually summons an avatar of the raven queen. How's that for a cool magic item?

To Meet the Raven Queen: In order to gain an audience with the Raven Queen, pilgrims have to complete a challenge at each of the four Fate Pillars outside her palace. These challenges are kind of odd:
Once the travelers are allowed inside, her sorrowsworn may attack them.

Fighting Orcus: At one point the PCs are attacked by the aspect of Orcus. He must have great epic tier powers, right? Let's look at one:

"Lesser Aura of Death (Necrotic) aura 10; enemies that enter or start their turns in the aura take 5 necrotic damage (10 necrotic damage while the aspect of Orcus is bloodied)."

Five damage at epic tier. FIVE. This was the big problem in the original 4e published modules. The monster stats were way too weak. This fight with the aspect of Orcus was a major let-down for my group.

This adventure is the culmination of the entire HPE adventure path. In it, Orcus raises an undead primordial and sends it to the bottom of the Abyss to get a shard of chaos. This shard can be used to kill gods.

The Finale: Our heroes travel to The Raven Queen's throne room and see that a red crystal pierces The Raven Queen's chest. A line of silvery radiance connects from the shard to Orcus, who stands over her prone body. The line is transferring divine power from The Raven Queen to Orcus! It's a pretty awesome scenario.

The Shadowfell: Gloomwrought and Beyond 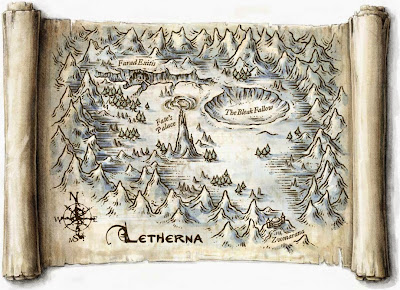 Letherna: The Raven Queen lives in a cold mountainous area of the Shadowfell called Letherna. Her citadel is a maze of towers and has bridges of stone and ice. Above Letherna, there is a maelstrom of swirling souls that shine like stars.

Some of the places and people in Letherna include:

The Bleak Fallow: A great valley where lost souls dwell.
Farad Exitis: A canyon where Vorkhesis, ally of the Raven Queen, presides over pilgrims.
Vorkhesis: He may or may not be the son of Nerull and the Raven Queen. Here's what we learn:
Zvomarana, Fate's Palace: Fate's Palace is located on Zvoma mountain right on the edge of Letherna. The paths that wind up the mountain to the palace are shrouded in cold mist.
Heroes of Shadow

The Raven Queen's Whisper: Sometimes, the Raven Queen takes an interest in a particular mortal who could prove useful to her. When a creature under her watch faces mortal peril, she might reach out and offer to delay their death. Accepting this offer means that you are bound to her will, at least for a time.

The Offer: A whisper only the character can hear. Things she might do for the character:
The Price: Your fate becomes clay in her hands. She can visit a curse of ill luck upon the character. Once per encounter, when an enemy hits the character, it becomes a critical hit! This curse remains until the character accomplishes a deed of the Raven Queen's choosing.

"Once the Raven Queen is satisfied that the task is complete, she loses her power over the character. The Raven Queen is a god, but she is still bound to keep her word. The other gods would move against her if they saw her take too active a hand in the affairs of mortals."
Mordenkainen's Tome of Foes

The 5th edition version of the Raven Queen is very different! She is described as:
Throne: She rules from her Raven Throne within the Fortress of Memories, a mazelike castle deep within the bleakness of the Shadowfell.

Ravens: She sends out her ravens to find interesting souls she can pluck from various planes of existence. She watches these souls try to unravel the mystery of their being - and ultimately go mad in the process.

Origin: She was once a beloved elf queen.
The Fortress of Memories: The Raven Queen collects shadows and memories, essences of the remnants of dead gods and mortals that were strewn about the Shadowfell. From these fragments, she built her twisted castle.

Ravens: Flocks of ravens darken the skies around it.  The ravens sometimes are used to deliver her cryptic messages all throughout the multiverse.

Trinkets: In the fortress are trinkets and items, memories plucked from people's past. The shadar-kai bring them to her as gifts.

Encountering the Raven Queen:
Vecna: Vecna wants to wrest her power away. If he could gain her power over souls, Vecna could amass an army of the dead to conquer the entire Shadowfell. He frequently sends armies to attack her and his old enemy Kas.

Audience after Death: When an adventurer dies, the Raven Queen sometimes enlists them on a quest before they are resurrected by their allies.  "Some sages posit that she is using people as pawns in an inscrutable game, the rules of which are known to only her and the Lady of Pain."

Servants of the Queen: "Sworn to the Raven Queen's service, the mysterious shadar-kai venture into the Material Plane from the Shadowfell to advance her will."
Riddle of the Raven Queen

There is a DMs Guild adventure about the Raven Queen! I ran it and wrote all about it right here.
That's the most essential info on the Raven Queen. If I find anything more, I'll add it to this guide.

I know most of my players preferred her for a deity. I noticed they did it for two reasons. She has all the trappings of evil (death, etc) without being evil. Players like to play the dark character but still want to be the hero. The Raven Queen allows for that.

And she is neutral which in D&D-speak means the characters are free to do whatever they want, whenever they want. Players tend not to like the constraints of alignment/deity worship that dictates what actions they can take.

The Raven Queen allows freedom of action with a dark side.

For my pantheon i loved the raven queen's portfolio (i mean it makes sense) but i disliked how she killed the god of death, so what i did when i took a bowling ball to the 4e pantheon i took the raven queen, stipped her of the obvious domain of death and gave it to the reamins of zehir (darkness and death) but i kept the raven queen's control over fate and winter. thus she still has some control over death as she sorts out the fate of the souls, and the husband is the guy who took over death and darkness

Steven, for me I kept her domain over death and actually made her a Primordial Overgod along with Pelor (Time), Moradin (Creation (and I added Order)), and Tharizdun (Chaos). The players final mission is to kill Tharizdun whose powers are tearing the fabric of reality apart. The other 3 Gods had been able to chain him and thrust him through the door of his chamber (Each of the 4 Primordial Overgods has chamber from which they govern their aspect and then a central meeting chamber. No other god can enter another's chamber.) but now Tharizdun (who had been unconscious) is starting to awaken.

What about in 5E?

I was also curious about 5E. Is it possible to align yourself with the raven queen, or one of her servants as a neutral paladin devoted to Pelor?

Thank you, this was very helpful! I heard about her in The Adventure Zone, but never knew where she came from!

I'm pretty surprised at her popularity given everything about her stinks of the same kind of "poser goth", "edgeless edgy" crap that birthed Linkin Park and Evanescance.

Given the choice between Orcus and the Raven Queen, eff it, let's see what Orcus'll do as a proper god.

Chill out, Valrus. It's just pretend and nobody likes an elitist edgelord. Needlessly hating things and being rude and petty doesn't make you interesting.

This has helped a lot, thank you very much! She's the main aspect of a campaign I'm building for my group that basically states "what would happen if the Raven Queen disappeared?" Like you stated, it's hard to find info on her, so reading as much as I can about her definitely helps with building such a campaign.

The Raven Queen is in 5e as part of the "Dawn War Pantheon." If you're DM's using that, there you go.

Does anyone know of any novels that feature the raven queen and/or shadowfell? I enjoy reading how writers flesh out d&d source material as inspiration to my campains.