Dead in Thay: Into the Doomvault 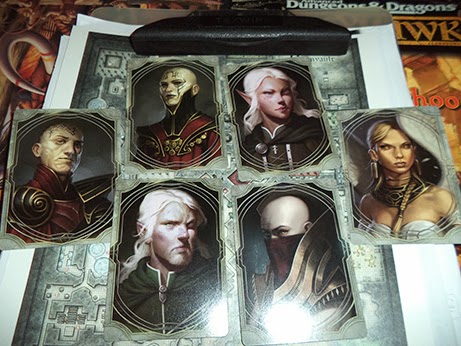 I can't express how beneficial it is to a game when you have genuine enthusiasm. Last season of D&D encounters, I really had a hard time getting motivated to run the game. Scourge of the Sword Coast wasn't a bad adventure, but it was sometimes a drag to prepare and run.

But Dead in Thay... wow. I love it. And there really is something about the map that helps it tremendously. The rooms are fun to look at. The maps really put the adventure way over the top.

I had wanted to print out some poster-sized ones this week but I didn't have the time or the money. I did print out a few color Doomvault maps on 8.5 x 11 cardstock for my players. I am going to see if it is OK for me to post blown-up maps somewhere online so any of you can download them and print them out. I print them at office depot. It costs $2.50 for a black and white map and about $30 for color. It takes about 10 minutes, depending on when you go and who is working.

I had run the game day on Saturday, which was awesome. And tonight our heroes were stranded in the Doomvault, with no choice but to help the rebel Red Wizards in their fight against their insane leader Szass Tam. Our heroes need to slaughter their way through the Doomvault to destroy some lich phylacteries or something.

The heroes have a little safe room that they can use special keys to teleport to for resting..

What is really nice so far is that most of the encounters have a roleplaying element. You don't have to fight all that much. Observe:

Room 1: The PCs can talk their way past a sexy vampire lady. My heroes didn't. They pummeled her and her cohorts.

Room 2: The heroes can befriend a vampire and save their friend from an arena fight against a wounded vrock. They did. Shalendra Floshin just has the worst luck - first possessed by a pit fiend, now this.

Room 3: Prism traps! (the vampire talked my PCs into staying out of the room - it is where he sleeps and keeps his treasure)

Room 4: A lightning trap that my heroes couldn't figure out. They just kind of took the damage twice and stumbled on past.

Room 5: Our succubus from season one is here, posed as an NPC from Daggerford. What amused me is that if the PCs thought about it at all, they'd know there is no way this woman could be here. But of course, they didn't. They brought her to their safehouse! So now, when the wounded party comes there to rest, she can kill them in their sleep.

Room 6: A fire elemental trapped in the room just wants to go home. Our heroes didn't bother looking at the weird runes on the walls, they just killed the poor elemental. They'd be severely bummed if I revealed to them that this giant elemental would have fought alongside them for the rest of the session.

Room 8: A room where there's undead that are guarding demons who are trapped in magic circles. The demons beg the PCs to be let free, and then of course immediately turn on them. Our heroes indeed let them out and had to fight the undead and a bunch of quasits too . What was funniest to me was a player who wasn't paying attention and tried to free a vrock after the quasits had turned on them.

Room 9: It's a dead end hallway with double doors. The doors are trapped - the hallway goes dark and our heroes must save or be paralyzed and take 7 necrotic damage. Next round, same thing. It keeps going until they all escape. Again, I was most amused as our heroes escaped, went back in and got paralyzed again trying to save each other. For some reason, hack and slash fighter made and threw a "molotov cocktail" in there which obviously made things worse.

That's what we did. It was very fun. I drew out the rooms on a sketchpad, which worked out fine. But I'd really like to print these maps. The adventure deserves it.

My players behaved today. In fact, they've been much better lately. The same 5 people show up every week and we have a nice vibe going.

I cant recommend this adventure any more highly. You should definitely check it out.
Posted by Sean at 9:04 AM