Hello again, stalwart defender! I had quite a ridiculous weekend loaded with way, way too much D&D-related excitement.

I ran the Dead in Thay game day event at my store on Saturday. Lo, and the store was thick with Yu Gi Oh players young and old, all adorned in youthful garb and a kind of A.D.D. vibe that resulted in the coordinator angrily shrieking at them on more than one occasion.

I did not let this deter me, however. I am genuinely excited for this adventure! It goes like this: Our heroes must bust into an "elemental node" and steal a "key". Then they end up at this big bloodgate where there's sacrifices, a portal spewing monsters, and a lich holding the whole thing together.

And then there's a bunch of confusing stuff with the pit fiend spirit from the previous season that somehow ends up with our heroes going through the bloodgate and apparently ending up in... THE DOOMVAULT. 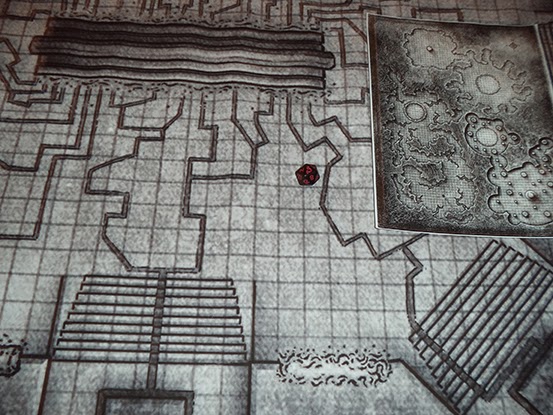 Because I sanctioned this thing weeks ago, we got our kewl dice and I got some swank NPC cards. I spared no expense on this thing - I blew up the bloodgate map and had it printed out at office depot in black and white for a cool $2.50. If I can figure to how to post files online for other people to download, and as long as it doesn't violate wizards of the coast rules, I can post blown-up image pdfs that you can take directly to Office Depot to print out your battle maps on gigantic 2 foot by 3 foot paper. Trust me, it is worth the effort.

This event is set up so that a bunch of groups of characters go through the different nodes at the same time, and then they spill into the final room for a massive melee with an army of bad guys. At our store, we're lucky to get enough players for one group, so I just ran my group through a couple of nodes and then sent them to the final room. It was pretty awesome.

There were so many people in the store playing Yu Gi Oh, painting minis and playing D&D 3.5 that I couldn't help but scope them out. I am very nosy and I like to watch people. There are a number of interesting people in there that I want to meet somewhere down the road.

With that event a success, I then drove to play in a 4e game at my friend's house. We are 17th level. I took some allergy medication and unfortunately I was almost passing out at the table. I felt bad, but I didn't want to leave. The DM is very good and we fought the Lord of Blades.

Then on Sunday night, I ran my D&D Next game. This campaign is one where my intention was to run a bunch of old school-style dungeons like White Plume Mountain and Many Gates of the Gann. But lately I've been trying to run the game more based on what the PCs want to do and it's working out better.

And now that I am running the Doomvault, I am intending on taking the good rooms from it and using it in my Friday game.

During my Spelljammer playtest, Mu Young the dragonborn picked up a mysterious mask-wearing "festhall" worker named Dawn the Darksail. Mu was extremely curious as to what Dawn looked like under the mask, but never found out.

So on the way home from the Spelljammer adventure, Mu checked in on Dawn. A bunch of stuff happened, which culminated in Dawn's unmasking. I had a few ideas but no official decision on what Dawn's face looked like. I decided to have Mu's player help me cook up a quick chart to roll on. It looked like this:

1. Scars
2. Beautiful (as in, a nymph that charms)
3. "Sloth face" (This was Mu's player's idea. She means a face like Sloth from The Goonies)
4. Monster face (like that woman from mortal kombat)

There was two more but I can't find my notes right now. I was rooting for monster face, but the dice decided that Dawn the Darksail indeed has a sloth face. Yikes. Mu decided to take her along.

I have a few blog posts in the can so stay tuned over the next few days. I have some Deities & Demigods stuff and I'll probably have plenty to say once I run Dead in Thay later today.
Posted by Sean at 8:01 PM