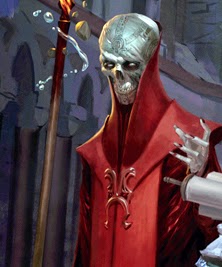 Another Dead in Thay session is in the books. You may recall that last week my players were misbehaving a bit. This group has one player in his 40's, and the rest of them are between the ages of 13-17. When we sat down to play tonight, I explained that I don't want to hear anybody badmouthing anybody else's character, just in general. That's just not acceptable at my table. They understood.

Then I went on to explain that this dungeon is a test of their skills as players. I told them that I hoped that by the time they were at the end of it, they'd be a well-oiled machine.

They took all of this well. I was pretty angry last week. I had to remind myself of how young they are. I am in my 30's. I don't have any kids. I love kids, but I have no plans of ever having any of my own. Tonight they started calling me "dad".  I was also accused of making "dad jokes". You be the judge, here. There is a paladin named "Duracell" (yes, it is that kind of game). Every time his turn came around I'd call him a different name, with my goal being to make the worst/best joke that I could muster:

"Durajailcell"
"Duracellular phone"
"...Paramecium" (I was trying to come up with something about a biological cell but failed)
I should have said "Cell-fee". Selfie! Pretty sweet, right? ...Don't hit me.

Last time, our heroes had barely survived room 15, the teleport maze with the glabrezu in it. They had to rest again. Tonight they were off to rooms 10 & 11.

Room 10 is the scary one. It is the one with the LICH, and four dread warriors with 75 hit points each! When I was preparing it, I just did not see any way that this group could survive. Look at those stats. He has an AC 16 and 135 hit points. Blight does 8d8 damage, half as much on a miss! And Fireball does 6d6 to everyone within 20! He has a "legendary action" where he can let out a wave of energy that does 10 damage to all within 20 feet..

Legendary actions, I guess, are a gimmick for powerful monsters. They can pick and choose from a bunch of little powers to pull off at the end of the round between their turns. They have 3 points to spend, and different things cost different amounts of points.

I like the idea of the legendary actions. It feels like a continuation of the work Wizards of the Coast was doing in 4e to make certain monsters more special, particularly dragons.

The battle was insane. Blight dropped Hack and Slash Fighter real fast. The players were stunned when I shared with them how many hit points the monsters had. Each of the dread warriors had 75! Because I only had four players this week, I had the PCs face 3 warriors instead of four.

The "Horrible" cleric turned 2 of the 3 dread warriors (even with their advantage against being turned), effectively taking them out of the fight. It is interesting to note that a Lich has the power to succeed on three saving throws automatically. I guess that will help avoid anti-climactic "boss" fights, but it makes me worry that once players pick up on this, they'll just make sure the group has four or five turn undead/stun powers to circumvent it. I don't know, I don't have enough experience with D&D Next at higher levels yet to see if this is an issue or a possibility.

The heroes kept dropping, but hung in there thanks to the cleric's heals, and their trusty NPC (Manny the man-at-arms, who is basically a D&D cowboy with a severe drinking problem) also dumped a potion of healing in the rogue to get her back to her feet.

I might have cheated in favor of the PCs once (and I didn't use cloudkill), but for the most part, they beat the Lich on their own. I unloaded on them with blights and fireballs. Not too shabby!

They headed to room 16, which is a really cool trap room full of dead bugs, and pit traps, and trapped platforms, and demon faces that spew insect swarms. It is a fantastic room. They got a little frustrated with it, but made it through in OK shape.

That was it. Three rooms! I had originally been hoping we would get through 60-70 rooms in the dungeon before the season ended, but it actually looks like we'll do considerably less than that.

Some of the players asked me to run a 4e game on Thursdays. I decided to go ahead and give it a try. I kind of get the feeling it will only happen once or twice. My 4e is rusty, but I like the idea of going through the newer issues of Dungeon and checking out their first level stuff. Plus, it gives me more material for this blog.

So all in all, this week went pretty good. I'll be back tomorrow with a bunch of yammering about the basic set that wizards is trying to.. DuraSELL you. Right? Not too shabby!
Posted by Sean at 9:14 PM