Dead in Thay: The "Bad" Cleric 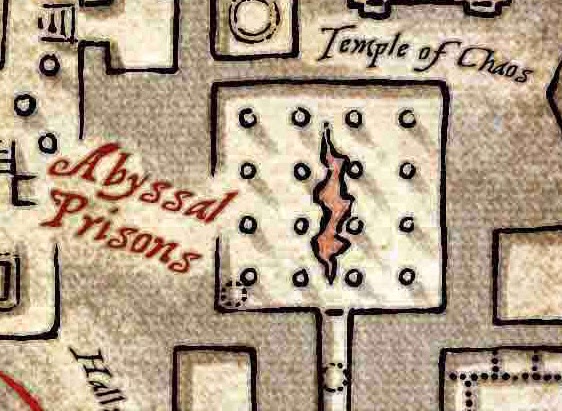 This just in: I still love Dead in Thay. Our heroes mauled their way through a handful more rooms tonight and as usual, there were some developments. P.S. Spoiler alert for Dead in Thay.

Real quick, I want to point out that I love the "safehouse" the PCs can go in. It's a tiny demi-plane. Each hour you spend in it ages you one month! That is a cool way to discourage too many long rests.

I also get a kick out of the treasure tables. Like picking spells, it is a bit of a pain to look them up - IMO this has to be done before the game, so that means your prep time is that much longer.

This group is in love with the bag of holding, so I read up on the D&D Next version to make sure I was doing it right. It holds 500 pounds, you can breathe in it for 10 minutes and then suffocate. If the bag is pierced, all of the items (except artifacts) are lost forever. When I told the group this, they had a fun idea. If they were in a deadly session, they'd climb in the bag and let it be cut or damaged. Then the party would be whisked away to parts unknown on what would likely be a super-awesome adventure.

A new guy jumped in on this session. He looked like he was around 19, a bit older than most of the other players. He had some experience with older editions, and had brought a 3rd edition elf rogue with him. I was stunned when I realized how quickly we converted his character to 5th edition and leveled him up to 6th level. It took about 5 minutes. Awesome.

This new guy is a roleplayer and a thinker. He immediately "got" what was going on better than some of the other players.

We did a few more rooms in the Abyssal Prison:

Room 7. The elemental vent that lashes out with random energy attacks. If you jump it... it takes you to a random plane! I had my deities and demigods random plane chart at the ready. New guy almost jumped in, but thought the better of it.

Room 12. This room has a gimmick where when you step in, you are magically flung up into spikes on the ceiling. There are open pit traps in the room, and it turns out they have invisible covers which means the only safe way to traverse the room is by standing on the pit traps.

There was a lot of experimenting. It was all new guy figuring it out. The rest of the group was utterly lost trying to navigate this room.

Room 14. A bunch of wizards and undead were guarding cells full of demons. Hack and Slash Fighter ran in here alone and ate piles of magic missiles. He then proceeded to tell the healer he was terrible and I almost lost it. I never get mad, but this was just so offensive to me. I'll explain in a minute.

Room 15. This is a room that has a glabrezu (giant 4-armed spellcasting demon) and random teleportation traps. This was epic. You get teleported on the ceiling, and then you stay on the ceiling til the end of your next turn - then you fall.

New guy immediately started mapping the room and marking down where traps were. Hack and Slash Guy ran around angrily trying to kill the demon, but kept getting teleported far away from it. The party paladin got in an epic one-on-one battle with the glabrezu, and he was pretty much saved by the party cleric who torched the demon with radiant ranged attacks.

This session took quite a while, as these players are just not prepared to handle traps like this at all. They either barrel into them, get hurt bad and then get upset in real life, or they just stand there waiting for someone else to figure the trap out. The brand new guy single-handedly led the group through the dungeon, honestly.

At one point in the night, some of the players turned on the party cleric. They sometimes jokingly tell him he is a "horrible cleric", but they mean it. This is partly because he doesn't know all of his powers. This upset me, because.. none of them know their powers! The two main people bothering the cleric are:

Hack and Slash Fighter - He has NEVER USED HIS SECOND WIND. I have repeatedly offered to send him the playtest packet so he can sharpen up on his fighter, but he never accepts. He keeps thinking he has powers and abilities from older playtest packets. He does not own dice. He does not bring a pencil to the game. This kid charges every monster. He runs into rooms all alone, gets mauled, and then thinks the cleric has failed him because he is bleeding to death.

Brony - Brony plays a dwarf fighter who knows none of his powers. He is one of the laptop people. He never pays attention and frequently has to be told to be quiet as all he wants to talk (loudly) about is My Little Pony and video games. This is a player who has used his fighter ability to use an extra action each encounter... TWICE. In his entire career! You are telling the cleric he doesn't know what he's doing?

The hypocrisy was staggering. It swiftly began to turn into a sort of bullying situation, where they all wanted to gang up and blame the cleric for anything making them unhappy. The new guy was distressingly quick to join in.

I immediately leapt to cleric's defense, telling them that they take so much damage because they play stupid. He's just one cleric. He can't heal you when you stand in the open while 4 casters launch a total of 12 magic missiles per round at you! And man, playing a cleric is thankless as it is. Maybe one of them should play the healer and see what it's like.

I shut them up, but I could sense it wasn't over. I have a deep desire to embarrass these goofballs next week, but I'll try and stay cool. It is incredibly disappointing when you see bullying behavior in a game that often serves as a refuge for people who suffer from bullying in real life.
Posted by Sean at 10:03 PM