Scourge of the Sword Coast: A Eulogy

The Scourge of the Sword Coast season of D&D Encounters is officially over! This was quite a night, my friends.

I'm not sure how much I should say about this, but there have been some developments in the character assassination plot that I wrote about the other day. Basically, some of my players were plotting to kill another player's character in Dungeon Crawl Classics because she was using her laptop during the game and it was distracting.

Tonight the store owner found out about it. He was none too happy and there was a whole thing over it. It was kind of a big deal. The store owner and I are on the same page, but I was taken aback by how intense he was on this issue. He's a pretty mellow guy, normally. I think part of it was because the laptop player is much younger than everyone else. Really it all boils down to one simple thing: You don't deal with out-of-game problems with in-game actions.

Once that was settled, our heroes resumed their probe of Floshin Manor. They fought the grues, they went down the stairs and fought the animated armor. Once the armor was destroyed, I was asked if they could wear it. It was plate mail. I am not sure when a PC is expected to have plate (it's 5,000 gp, I believe) so I hesitated, but hey... the armor is there, why can't they wear it? We did have an amusing conversation over the fact that when they go back to Daggerford, Mr. Floshin is going to be a bit taken aback at the fact that the heroes stole all the stuff from his manor and are brazenly wearing it right in front of him. 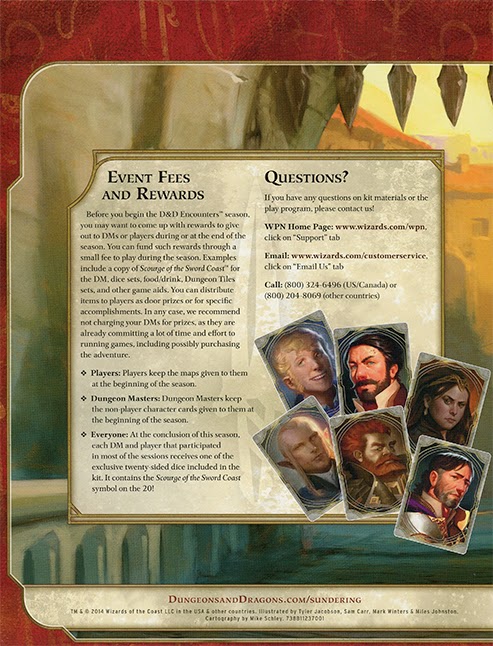 This somehow led to even more questions and ideas about the bag of holding. I have never seen anyone so excited about a magic item in my life. They wanted to stuff a bookcase in there, and a statue of Corellon, and a dolphin fountain. It is really fun to watch new players discover the game.

The adventurers went down to the dungeon level, thankfully skipping the second floor, and began to hack everything in sight. The second-to-last room had four dread warriors and a Thayan Battle Wight that really did a number on them. The dwarf fighter got energy drained twice. His max hit points were reduced by 16 and would not go back to normal until an extended rest was taken.

So, one room from the big bad guy, guess what they tried to do? Extended rest. Keep in mind they have done this kind of thing about 3 times this season and every single time they were "taught" that the monsters in the dungeon move around. It's not a video game where they stand in the room and stare at a wall until the heroes come to kill them.

But, as I've mentioned before, players don't seem to learn when you demonstrate rather than explain. And even when you explain, still sometimes it doesn't sink in.

So, yeah, our heroes roll out their bedrolls and get ready to nap. And our villain, Shalendra (she who is possessed by the spirit of a pit fiend) explodes into the room - surprise round - and casts FIREBALL. 6d6 damage. And then she uses her special deal where she gets to take a extra action once per day to... cast FIREBALL AGAIN.

I double checked on the surprise rules. They're pretty loose for D&D Next: "The DM determines who might be surprised...". The effect: "A creature that is surprised cannot move or take actions until after its first turn in the battle." So they can make reactions?

Our heroes were utterly decimated. The energy-drained dwarf was deep in the negatives.

One of the reasons I opened with this assault is that I learned in 4e that you should blow all of your monster's big stuff right away, otherwise you may never get to use it. The big battle that starts off with huge danger is very satisfying for the players to overcome. They want to feel threatened in that final fight.

So the adventurers rallied, bloodied her, and then the paladin again did the protection from evil gimmick to cast out the pit fiend spirit. It was a very good finale.

Our heroes leveled up to 6 and are ready to take on THE DOOMVAULT.

And now that this season is officially over, I'd like to give a final review of it here. I wrote most of this two weeks ago. I would like to stress that while I may come off critical, I don't think this is a terrible adventure - although I have never seen an adventure like this... one with 5 similar dungeons situated fairly close together. I just think that this adventure wasn't a good fit for encounters

I certainly think that a lot of thought and effort went into the making of this scenario. There's plenty of fun ideas in here and some kind of cool NPCs. 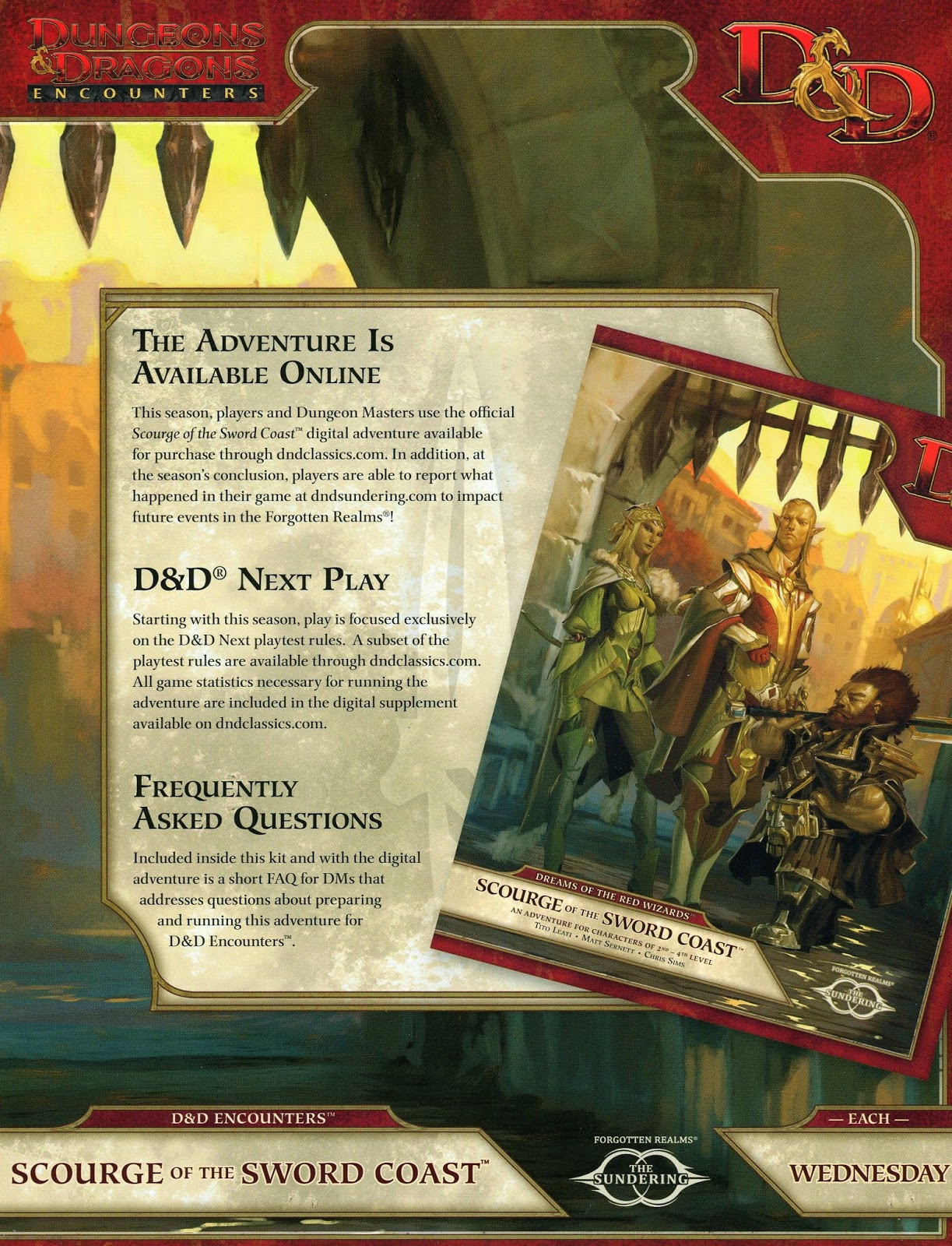 Maybe this module works for other groups. But it did not work for mine. I am running this for a group of teenagers who know next to nothing about D&D and I get the vibe they'd be just as happy not coming at all. Keeping their interest is a challenge.

This thing actually runs on the premise that I can plop the heroes in town and let the heroes pick one of four dungeons to trot off to. And then, I assume, I can just run these dungeons right off the pdf, right there? Are you crazy?

It could be that the writers think that the first session is one where our heroes go to town and do a lot of roleplaying, meeting the NPCs, finding the hooks, do some shopping, etc. To me, that is a bullshit session of D&D. I like to get things done. This is Indiana Jones to me. If Indy goes to the library, it's for some quick backstory and then he jump-kicks a nazi or something.

In addition, this group would probably never come back to play again if I ran an entire session in town. They're half-bored fighting skeletons.

Maybe some DMs can run these dungeons on the fly. I cannot. I suppose you could read the two pages of intro text for each dungeon and then go off the descriptions at the table. But the problem with that is that each of these dungeons run on the idea that if the PCs make noise or kill certain monsters, other monsters will be alerted and will jump in. You are not going to be able to juggle that if you haven't read it ahead of time.

Aside from all that, the DM has to read the thing before the game. If I am a player and I show up to a game where the DM is reading the adventure as he is running it, I am not ever going back. The DM's job is to be prepared. 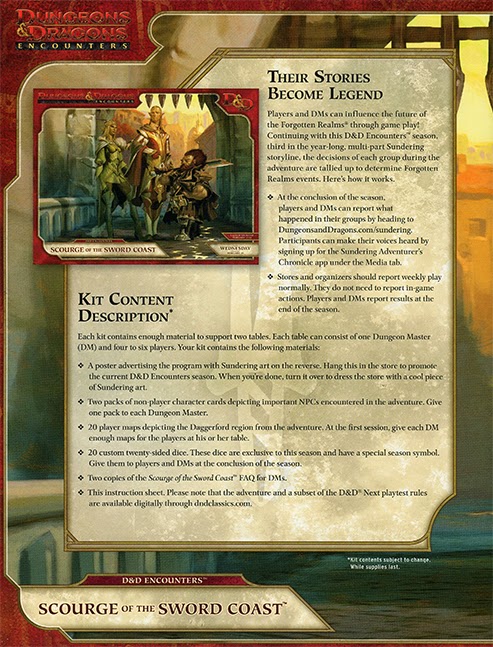 Another problem with encounters, and this has been a problem since the very beginning, is that players hate having to start over at level one with each season. I guess this is because encounters is supposed to be an introductory program and having a new player play an 8th level mage just isn't going to work out. I am very happy that the PCs will get to keep going with the next season.

I further assume that the thinking is that these players will form a home game and boom, the program has spawned a gaming group full of players who will play D&D and buy D&D stuff. This does not ever happen. Ever. If I don't form that outside group, nobody does. This program spawns "zombie players" who will show up every Wednesday for months, even years, who will never learn the rules or buy anything at all.

Here is another thing. Why the hell is there so little art? How is it that goodman games, a smaller company than Wizards, can load each of their products full of inspiring art while Wizards, owned by HASBRO, puts almost no art in these adventures whatsoever? I think if there's one thing that the DCC RPG book has proved it's that art matters. Whether people realize it or not, a book loaded with art causes people to go back and read through it more and more.

I know DCC uses black and white art which is probably much cheaper than the digital painters out there. But again, D&D is owned by Hasbro. There is money here, no? And second, and maybe this is me being ignorant, but is deviantart not full of people doing fantasy drawings? If you don't have much of an art budget, couldn't you just grab some of these people on the cheap, with the idea that they'll get exposure, and that the ones who develop a following will get more work, a raise and be built into a D&D art legend like Elmore, Easley or Reynolds?

Again, I don't know how the money side of the art world works. I'm not thrilled with the idea of paying artists peanuts. It boggles my mind that a hasbro-owned company doesn't have the budget to pay artists. But if I was an artist drawing for fun while working a real life job, I would jump at the opportunity to draw for Wizards.

OK, I'll stop complaining now. Here are 10 Things I Like About Scourge of the Sword Coast:

1. The bad guy is a pit fiend spirit that possesses people and monsters

2. Julkoun, the city where the people have been taken away and the monsters now rule

4. The refugee scenario at Daggerford

5. The delimbiyr bloke and the power to summon dwarf spirits

6. The maps are insanely awesome

7. Magic statues that give blessings

8. The whole story with the Duke being a bad ruler, and his sister being a good potential replacement

9. Firehammer Hold, the mass grave, and the dwarves that enlarge themselves

10. The showdown with the possessed Duke at dinner and the magic sword, Lawflame

Index of all of my other Scourge of the Sword Coast blog posts:

1. The Crazy Guy in the Store

7. Harpshield: The Potion of Poison

8. Phylund Lodge: 3 Things Stores Should do

I'd like to send you some source info for World of Atlas projects.

My primary email is hburdick@lexile.com.