The Greatest Dungeon Masters in the World: Dave Arneson 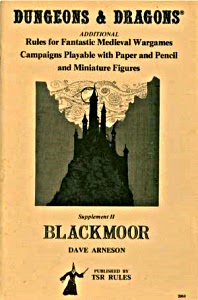 All right people, it is time for part 2 of our little examination of impossibly huge people! The first Great DM was Ed Greenwood, whose insanely massive, detailed campaign has proven to be fun to examine. It feels like an overwhelming task to try to research a complete look at the late, great Dave Arneson. What follows is the result of a lot of digging and travel in the mysterious wayback machine. I am a guy who is primarily interested in campaign stories and fun facts, so STRAP YOURSELF IN:

As you probably know, Dave Arneson was the first person to tool around with the concept of role-playing games. He got some of his wargaming buddies to try out a game where they each controlled a single hero instead of an entire army. Together, they ventured into Castle Blackmoor.

Gary Gygax heard about it, shared a series of phone calls with Dave on the topic and was off to the races.

From his long-defunct site: 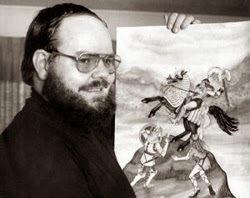 "Dave's medieval games soon saw the introduction of "Hero" leaders and "magical monsters" in addition to the 'normal' military units of knights and bowmen. It was a short step from there to the individual "heroic quest' that dominates most Fantasy fiction.

Arneson's Napoleonic campaign was soon replaced in the early 70s with BLACKMOOR fantasy campaign setting.  "roleplaying in a non-traditional medieval setting, with such things as steam power, gunpowder, and submarines, yet with the emphasis on story and roleplaying not roll playing." The BLACKMOOR Campaign merit regard as the longest running continuously running fantasy roleplaying campaign in the world. - 25 years and counting."

There's a nice account of how the whole thing grew here.

"We had been playing a big Napoleonics miniatures campaign, which was getting bogged down in long drawn out miniatures battles. So, as a diversion for the group, one weekend Dave set up Blackmoor instead of Napoleonics on his ping pong table." 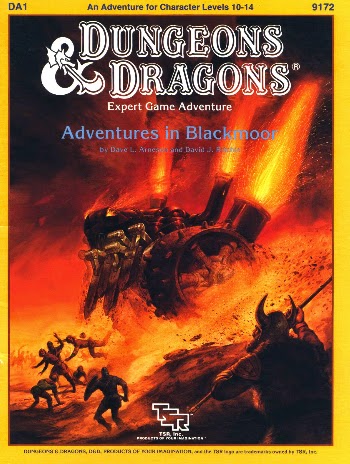 The original game had some fun, funky rules:

- You died when you got hit... ONCE.
- Combat was resolved with rock, paper, scissors. Always go with rock. Nothing beats rock!
- Dave had picked up three d20's in England as a youth (it was numbered 1-10 twice over) and he ended up using them to resolve many mechanics in Blackmoor.
- There were three "levels": Flunky, Hero and Superhero.
- Dave said he based armor class on an American Civil War Ironclad game system.
- Stats started getting used a year or two into the game. Players rolled 2d6, so stats ranged from 2-12.
- Dave kept the character sheets to himself on an index card. The players only held them during the game.

I dug up an account from one of those early games written by a player named Greg Svenson. Two players actually played the bad guys:

Our heroes were 20 men-at-arms. Some were played by the players, and the rest were NPCs. The ruler of Blackmoor was a PC, but I don't think he went into the dungeon. The evil wizard did something evil and fled into the dungeon. After him, men-at-arms! Our heroes:

- Fought a black blob that dissolved weapons.
- Fought giant spiders.
- Dealt with a smoking pot that shot fireballs at them.
- Found a magic sword. A PC tried to pick it up and was sent hurtling across the room. Bill tried to wield the sword and was successful - he immediately leveled up and became a HERO as well as the leader of the party.
- They camped by a devil statue. During the night a beautiful woman seduced Bill. Then she turned into a serpent and killed him.
- The balrog attacked the next day, killing 19 of the men at arms! There was only one flunky left standing. The balrog told him to return to tell the baron what he'd done. This lone survivor played by Greg Svenson went on to become The Great Svenny, a character detailed in multiple published supplements. The character lives to this day. Greg has played his character's son and grandson in separate campaigns. I would guess that Svenny is one of the great characters in D&D history alongside Lord Robilar of Greyhawk.

Here's another adventure from the fall of 1972, shortly after Gygax got involved. Our heroes: 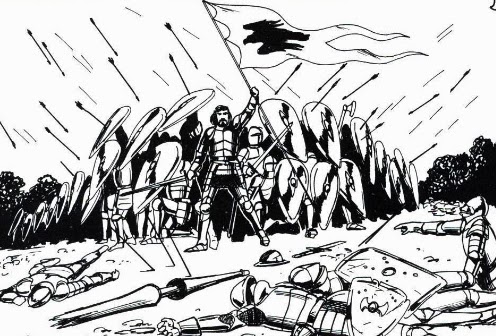 - Svenny had memorized the upper levels of Castle Blackmoor and was leading the party around.
- They headed down some stairs and came upon a huge cavern with a lake of lava. In the center was an island full of treasure. On the mound of gold was.. a dragon!
- William jumped off a ledge onto the island. The dragon gave him a puzzle, he solved it and was rewarded with a suit of blue magic armor and a mechanical horse. It was sort of like sci fi power armor.
- The armor had buttons. Some of them sent him charging into battle while he screamed "No, no! Stop!" William became known as the Blue Rider.

That sounds hilarious. I really like the idea of the dragon on the island in lava. It's classic but I don't think I've done it. Got to steal that!

When the legal split went down, from what I can tell, the original idea was for Advanced Dungeons and Dragons to use Greyhawk as its' setting, and Basic Dungeons & Dragons would use Blackmoor as its' setting. I guess that pretty much happened with Mystara. Bummer Quote:

"In 1979, Arneson filed the first lawsuit (of five) against Gygax and TSR Hobbies (D&D's publisher) over crediting and royalties on later adapted versions of Dungeons & Dragons. Arneson left D&D/TSR and they resolved the suits out of court in 1981, but this did not end the lingering tensions between them. The court documents are confidential and neither party may talk about the issues involved. It was resolved, however, that they are 'co-creators.'"

- In 1986, Arneson wrote a new D&D module set in Blackmoor called "The Garbage Pits of Despair", which was published in two parts in Different Worlds magazine issues #42 and #43. Wow, the GARBAGE PITS OF DESPAIR! I have to dig that up.

- He was in the Dungeons & Dragons movie as a mage throwing fireballs at those horrid CGI dragons. The scene was deleted. NOT COOL.

" Often commenting in private the issue of players over obsessing on the 'game engine' and graphics, and forgetting the reason for the game, what engages them to think, imagine, and enjoy."

He sounds like an awesome guy. I want to play a balrog and I HAVE to find the Garbage Pits of Despair. See you tomorrow, pal!
Posted by Sean at 5:11 AM

I didn't know a lot of this stuff, so damn interesting read.