Hello again, cavern crawlers! I got into D&D as a kid around the time when 2nd edition hit. I am not overly familiar with the products that came before. I picked up a 1st edition Deities & Demigods a week or two ago and was pretty shocked when I went through it. This copy was made in 1980, and is not the version with Cthulhu and Elric.

As a 2nd edition guy, I am a big fan of the art of guys like Tony DiTerlizzi and Baxa. Erol Otus and Roslof never did much for me, although as time as has gone on my appreciation for their work has grown quite a bit. Jeff Dee doesn't seem to get a lot of credit, either. His stuff is very exciting and to me he was probably the best line art guy they had back then.

The thing that sticks out to me the most about this book is that there is art for everything. I'm talking two or three drawings per page! It really bothers me that in the current D&D releases, there is almost no art at all.

I have never really liked using real-life mythology in D&D games. This book is full of it. There's cool stuff here or there, but for the most part I find gods from our Earth kind of dull in D&D. I prefer it when the creator takes those mythological concepts and builds something unique and modern for the game.

There are a scattered few in the book that interest me for various reasons: 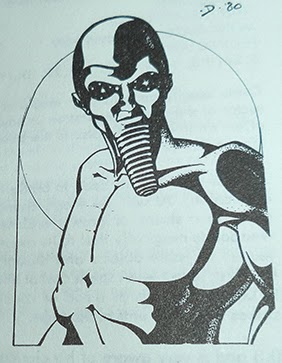 He is a dwarf with universe eyes. I believe his followers were detailed in some official Spelljammer products. I recall encountering a pyramid ship full of Ptah's people in a Spelljammer campaign ages ago.

It says he is a master of planar travel and that his gaze can force you to a plane of his choice. He wields the scepter of the gods, which does 1-100 points of damage on a hit (imagine rolling 1 damage with it!). The scepter can also tell the wielder about the enemy's strong points (?).

Ptah likes new ideas and devices. If you come up with something cool, there's a 5% chance he'll reward you with a magical amulet known as a "thet". A thet has 2-12 charges, and will either give you the ability to become ethereal once per week, or it can protect you with an anti-magic shell but still allow you to cast spells. Wow. I'll take the anti-magic shell, thanks.

The Nehwon Mythos section really sticks out. I once tried to read one of Fritz Leiber's Lankhmar books but didn't make it far. It was about a clan that lived in the snow, and a carnival came to town. The wives didn't want the men to go and see the hot chicks at the carnival, so they'd pummel the men with icy snowballs. This was not exactly what I expected to be reading about. 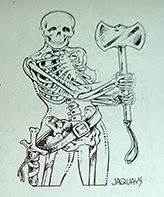 There's a lot of cool stuff there, though. I love the Nehwon ghoul, especially the drawing by the extremely talented Jennelle Jaquays - who is not only one of the great adventure writers of the time, but also a top notch D&D artist! Very underrated, in my opinion.

Nehwon ghouls have transparent organs and grey skeletons. They are almost completely invisible in low light and they sometimes ride horses that have invisible organs just like them. Awesome.

I find the behemoth quite amusing. "Imagine a killer whale with four stubby legs and no fins and you have the perfect picture of a swamp behemoth". I'd be tempted to make these a comedy monster, so slow as to be pretty much useless.

This one is quite interesting to me, as Corellon has remained the elf deity in D&D lore to this very day. This version of Corellon is depicted in a pretty cool Erol Otus drawing. The description includes the line: "Corellon is alternately male or female, both or neither". Wow! I wonder why they did that? They constantly refer to Corellon as "he", in quotes. If you try to pick up Corellon's sword, you will be burned for 10-100 points of damage.

She gets a huge write-up and a very cool drawing, again by Erol Otus. I assume that's a drow priestess. If you look close, she's pouring gunk on her victim, not stabbing him.

Lolth has a meager 66 hit points, but the text points out that she has a high armor class so her low hit points aren't a big deal. Well, I beg to differ. My group beat the bejeezus out of her in no time way back when - of course I was a kid and ran her very poorly. Her armor class is a -10, which in D&D Next terms is an AC 30.

There's a fun drawing of Loki messing with Thor. It's always interesting to see alternate depictions of these guys, when we are so used to the Marvel Comics versions. In the game, if you look at Loki for 3 rounds, you can no longer save vs. his suggestions or charms. He also has magic boots that combine the effects of water walking, flying, traveling and speed. So, yeah, dibs on the boots.

He's got red hair! He rides on a flying chariot pulled by two magical goats. That is awesome. He has a magic girdle called Meginjarder, which gives him the strength to wield his MIGHTY HAMMER. He also has a magic glove called Jarn Grieper which lets him hold the hammer when it is red hot and lets him attack three times per round. Speaking of Mjolnir, his magic hammer:

Fun fact: Thor's goats are often eaten by his friends. They magically regenerate in the morning sun. "Come on guys, who ate my goats?" One is black and one is white.

The back of the book has a very cool section on the planes of existence, full of weird diagrams smooshing all of the cosmologies into one cohesive whole.

I like the paraelemental planes, which I guess you could fold into the 4e "Elemental Chaos": 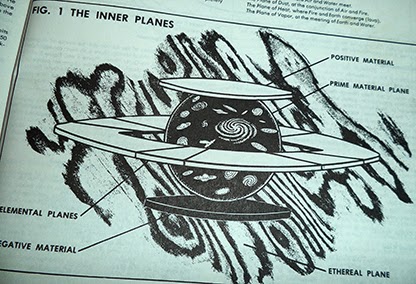 They even include an encounter table for when your heroes are drifting through the ethereal plane. There's a 1 in 20 chance ("...roll at the beginning, middle and end of the journey") of running into a cockatrice or a platinum dragon, or a nightmare! Awesome. It's funny, I've never actually run a cockatrice that flies around. But they do fly, right?

There's also details on an "Ether Cyclone", a twisting vortex with a cool chart to roll on. It can blow the PCs to another plane, or cause the heroes to be lost for 5-120 days. Makes me want to use the Ethereal Plane. Why is this not in the Manual of the Planes, though? Or is it?

There's similar details for the Astral Plane, with a chart detailing the consequences of a "Psychic Wind". It can blow you off course and send you to a different astral destination, or if you roll a 20 on the chart... it can cut the silver cords that link the heroes to the Prime Material and KILL THEM on a failed saving throw!

Then, this is the handiest thing ever... A random chart of the planes. I can think of five times I could have used this in a game right off the top of my head.

This final planar section alone makes this book worth having. Overall it is very useful and very inspiring. There is an insane amount of content and art packed into each page.

That's it for today. I have to prepare Dead in Thay for tonight's session. I'll probably blab all about it here tonight or tomorrow.
Posted by Sean at 12:18 PM

Re-elm: Thanks, I love the old, weird D&D books, especially their own "home-made" mythology. I think they should use this material to give Corellon more dimension. Corellon was a bit bland in 4e.

There is an Ancient Egyptian god (from our world's history) called Ptah. He was also interested in invention and ingenuity and building things,etc.