Planescape: Blood War V. The Palace of Flesh and Delights 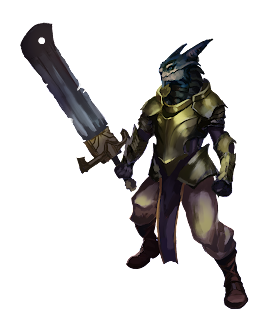 This image above is a new art commission I got of Bidam. His sword of sharpness is a "buster sword" - it got enlarged during one of their trips to Limbo. I should have a new Theran by next week. I want a piece of art depicting him where his robe of eyes is actually a tracksuit.

Last night in the Planescape campaign, the heroes went to the abyssal realm of Malcanthet, queen of the succubi.

If you look online, you'll see there really isn't that much published information on her. I found three useful sources:
The Party

We had left off last time in the Midnight Isles, the demonic realm of Nocticula, assassin of demon lords.


A pirate ship captained by Minagho, daughter of Baphomet, had attacked the heroes. We had a really cool battle (I love pirates and ships in D&D). I had written out a plan for Minagho, which I need to do in order to run spellcasters effectively. The plan:
The arcane gate went fine. Bidam made his save against the crown AND he ducked her attempt to telekinetically chuck a thing at Bidam to knock him into the water.

The group had brought a weak NPC with them on this adventure. She is a cow-lady. This freaking cow lady rolls high constantly! Last session, she pounded on some oozes. This time, she cracked a husk in the head and then, she aimed the ballista at Minagho and fired. She rolled a natural 20!

The bolt went right into Minagho's chest and blood poured out of her mouth. The group sailed close. Bidam did the classic "pirate swing onto the enemy ship" maneuver and cut her head off.

Minagho vanished in a puff. The group realized she had a demon amulet and had likely reformed somewhere else in the Abyss. I’m going to be running the Wrath of the Righteous adventure where the heroes will go through Baphomet’s maze, so this is a link to that.

It was an awesome fight. I'm not sure what to do with the cow lady. I should probably give her a new stat block as she'd have 'gained a level' by now. 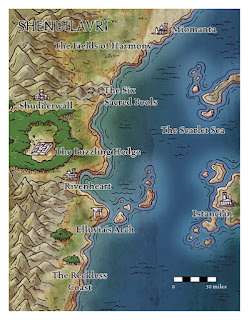 The group sailed on. The heroes had come to Shendilavri to rescue a devil spy, an incubus named Cavus. It turns out that he was being held in a prison right in Malcanthet's palace.

The heroes sailed the River Styx and came to Rivenheart, the main city of Shendilavri. The heroes were accompanied by Fall From Grace, the succubus paladin who is the granddaughter of Malcanthet.

Rivenheart is a demonic city that succubi bring mortals to. The mortals live a life of debauchery, sometimes for decades. Eventually, they become corrupted, a succubi kills them, and the energy of the slain transfers to Malcanthet and empower her.

There aren't a lot of actual details on Rivenheart, so I had to make a bunch of stuff up. I created a bunch of perverted joke locations because that's how we roll.

Some of the locations:
Mordayan Vapor aka "Dreammist": If you ingest the actual leaves/powder you die, as it is too potent. You have to boil it and breathe in the mist. It give you beautiful visions that last for about 30 minutes. When you come down, normal life seems drab and futile in comparison.

Bidam bought some, but did not inhale.

I made a list of the creatures that live in Rivenheart: Succubi, lamias, harpies, cambions, alu-demons, "half-fiend nymphs", and "mortal adulterers".

The mortal adulterers are right out of the James Jacobs article, and as soon as I read it, I envisioned a stat block of a Mortal Adulterer. What kind of powers would they have? "Work late"? "Gaslight”?

I also threw in a wet t-shirt contest because my campaign is really stupid. 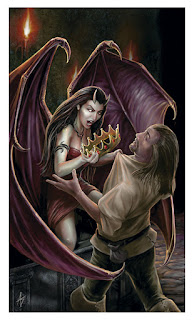 The heroes began to explore the city, and George threw me a curveball. Most of the time he's very straight-laced, but every now and then he kicks it up a notch. I had this married woman, yes - a Mortal Adulterer! - come on to him. He went right along with it. All the way! Shocked, was I.

Her husband, also a Mortal Adulterer, burst into the room and got violent. Theran mage-handed the guy's groin and made a heroic escape.

While Theran was off adulterating, Bidam saw some sunbathing succubi who needed oil. Bidam oiled them up but did not succumb to their feminine wiles. He is loyal to his wife, the demon lord Bazuuma.

The group reunited and realized that they were being followed by a harpy. They accosted her, and found out that the harpy was actually an angel of love in disguise.

Her name: Bella Pureheart. "Of course it is," said George.

I have this whole complicated storyline going involving the angel being a spy trying to do good. Fall From Grace was actually imprisoned here a while back and the angel helped break her out.

The angel of love said she would watch their backs. The group headed to Malcanthet's home: The Palace of Flesh and Delight.

The Palace of Flesh and Delight


All are welcome here, especially mortals. They're like lambs to the slaughter. As the group quietly made their way through the place, they spotted some goings-on right out of the James Jacobs article:
A succubus kissed a half-elf, whose hair turned gray as he shriveled up and died. In another area, three cambions were putting the moves on an elf.

The adventurers tried to creep by Malcanthet's throne room, but a succubus spotted them and charmed Bidam. Theran tried to give Bidam another chance to make the saving throw by punching him.

Violence is forbidden here without Malcanthet's express written consent. As soon as the punch was thrown, they were noticed.

As the group awkwardly stepped over the naked people, succubi grabbed at their legs. One was able to give Bidam a kiss, doing a cool 32 points of damage to him.

Malcanthet summoned elevated chairs made of hands and arms for them to sit on.

This scene is right out of Dungeon Magazine 149. She has all this dialogue and flavor text.

I finally got to reveal something to the players. Long ago, they had an adventure where they explored Grazz't's palace. They didn't know it, but during that scenario they interacted with a spy of Malcanthet.

The spy has been keeping tabs on the group since then. Malcanthet knows all about them. She knows the group works with the devils and assumed they had come to try to free the devil spy.

Malcanthet has special agents known as the Radiant Sisters. There are 13 of them, each of which wears a halo of a different color. In the Dungeon Magazine adventure, Malcanthet asks the group to take out a radiant sister who's been causing her problems.

For my adventure, I had Malcanthet make them a different deal. The group could have the spy if they agreed to steal something from Lilith, the archdevil sort-of consort to Baalzebul.

Origin of Malcanthet: Malcanthet and Lilith hate each other. Back when they were angels, Asmodeus got them to join his rebellion by giving them the impression that one of them would be his consort. They joined him, and neither one of them became his consort. He chose Bensozia instead.

Both angels were extremely bitter. Lilith ended up embracing apathy and lived in the Nine Hells with the vile devil/slug, Baalzebul.

Malcanthet ended up going to the Abyss, becoming a demon and getting involved in the War of Ripe Flesh, a vicious battle among the succubi to determine who would be the succubus queen. Malcanthet won.

In my campaign, the Pathfinder demon lord Nocticula is gunning for Malcanthet, but that hasn't really come into play yet.

The group makes the deal. To seal it, they had to do something out of the Dungeon Magazine adventure. Bidam had to kiss her. Theran can't do it because as an elf, he's immune to charm. Bidam took 64 points of damage! He almost died.

Malcanthet's symbol appeared as a tattoo on his scales. With it, Malcanthet can scry on him and telepathically communicate with him. She will use this to instruct the group on what to do when they visit Lilith in hell. 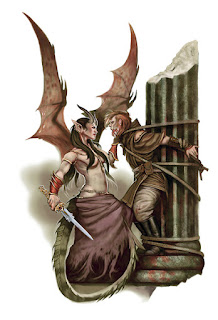 They go down into the prison and gawk at the other prisoners I made up - joke NPCs who did gross things to get arrested.

They saw their devil spy, the incubus Cavus. A radiant sister was in the cell with him, trying to convince him to defect to the side of the demons.

There was one other cell. In it was Red Shroud, mother of Fall From Grace. About 15 sessions ago, she had attempted to assassinate Bazuuma and my Donald Trump NPC, but failed. She's being punished for her failure.

So the group ended up fighting the radiant sister, who is a lilitu. I made lilitu stats. I need to fix them, as the damage is way too low. It should be 9 instead of 5.

The radiant sister is a bit different from a normal lilitu. She's a demon, she has a halo that can blind a target, and she has a magic heart-shaped container that she can hold a prisoner in.

The heroes kicked the crap out of her. A few sessions back, they got pummeled by one vrock, so I assumed this would be difficult. It was not! Bidam teed off with his sword of sharpness and then Theran disintegrated her.

The group decided to take it. They're going to bring it to Sigil and destroy it.

The heroes escaped with the spy and Red Shroud, who was semi-conscious.

Next time, they'll recover in Sigil and then lead the devil army in a charge to fully take Lamashtu's demonic realm of Onstrakkar's Nest.
Posted by Sean at 10:26 AM