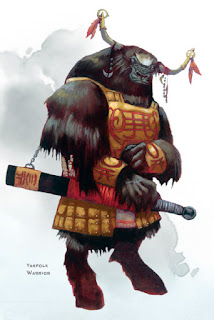 Episode 40: Big Yak Attack
As we get ready to start, the players warn us that Chris has been smiling to himself and seems especially mischievous today.


Don't forget that the new adventure, Tales From the Yawning Portal, comes out in a few days. I imagine we'll see the crew do some stuff from that book. I would love to witness the Waffle Crew going through the Tomb of Horrors.

Chris sums up the story: Harshnag the frost giant led the party to the Icespire mountains. The heroes went up a staircase carved into a mountainside. They fought a chimera aka a Snorse (somebody made Snorse art, awesome) Between the group and the fire giant lair was a village of yikaria aka yakfolk.

The group tried to sneak through the yakfolk village by having Harshnag and Krak make a distraction. As they were about to cross the village, they saw two yakfolk beating slaves to death. Plans have changed! The group springs into action. 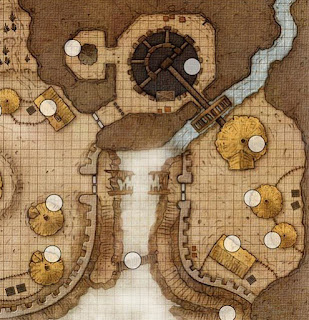 Strix drops a fireball on the bad guys and then she teleports onto a roof, but it's made of straw! he falls through the roof with Waffles, the baby owlbear, and lands in a pile of baskets. She’s in the chief’s hut.

Paultin gets hit by some arrows. A yak tries to hit Diath with some sort of banishment spell but he makes his save.

A yakfolk summons an earth elemental... yikes. It's coming for Diath.

Meanwhile, in the hut, Strix sees three naked elves. There are two males and one female. The males help her up. Jared points out that everything is coming up Strix.

The female elf, Halani, asks if she's come to rescue them. Strix says yes. Stirx decides to give them a task. She wants them to put on some clothes and go set some fires.

Chris refers to the yikaria bad guys as "Beef men" which cracks me up. Paultin casts crown of madness on the chief and it works! The chief turns against the other yakfolk.

Harshnag throws a spear at the water wheel. Natural 20! The wheel collapses and falls down the mountain, making a lot of noise. This is a whole thing in the published adventure.

Strix climbs out of the hut and.. falls again. She's outside. She fires a magic missile that kills one of the yakpeople.

The earth elemental melds into the ground. The group gets real nervous.

A yakfolk summons a floating weapon which begins to pound on Strix. The group is quite dismayed at the excessive spellcasting on display here.

Wow.. Paultin uses thunderwave to send SEVEN yakfolk falling over the cliff to their doom. Only the chief made his save.. and his crown of madness is gone.

Strix dispels the hovering magic weapon. The yakfolk caster shakes her fist ruefully at Strix. Suddenly, the earth elemental pops up out of the ground next to her. It pummels Strix and drops her. Poor little Waffles runs! He's running toward Paultin.

The priestess summons another spiritual weapon. It appears above Paultin. He’s got problems, because the chief draws his greatsword, which magically bursts into flame! Paultin takes a total of 35 points of damage! He's down.

Paultin had earlier tasked Simon with killing him some yaks. When he sees Paultin go down, he defies the orders and rushes over to him. Simon fires off a dart that kills the chief!

Evelyn casts command on the priestess and Anna tells her to FLEE in a way that makes me laugh. Priestess rolls a one on her save.

Diath spots some halflings wearing nothing more than grass skirts. Diath yells at them to beat up the priestess. They do so and are quite effective. 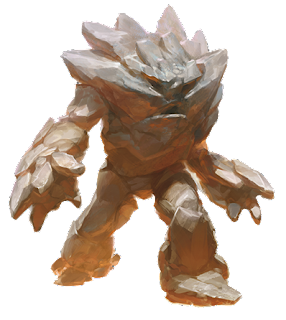 The earth elemental comes after Simon. The group is freaking out, except for Jared, who hates him. Simon gets squashed! Wow. Jared can't stop laughing. The other players are severely distressed.

Harshnag’s giant bird had grabbed Paultin and is flying him around, keeping him out of harm’s way. Paultin actually rolls a 20 on his death save and immediately awakens with one hit point. He sees that Simon has literally been crushed.

Diath drops the priestess. The group is very displeased to see that the earth elemental did not vanish when she died.

The elemental beats on Harshnag. He goes down! As he drops, Harshnag tries to grab the elemental and throw it over the side.. but in the struggle, both of them fall over the side and vanish into the waterfall chasm.

Paultin investigates the remains of Simon. Is Simon salvageable? He rolls an intelligence check. Natural one. He thinks Simon is gone forever. Paultin angrily mutters, "Diath will pay for this."

Poor Strix is still dying while the group gawks at Murderbot's remains.

Fight is over. Evelyn heals Strix. Paultin yells at Diath and asks him if he thinks it's funny. That's where we stop.

Nate won't be here next week. Jared laughs and says he might just take the remains of Murderbot and get rid of the evil mannequin for good.

Good show as always! This was one long battle but it never dragged. Things were constantly happening and it was funny the whole way through.

Are their characters going all the way to 20th level? I hope so. I know a lot of groups never get that high, I think it would be very cool to see. Strix will have so many awesome spells, it boggles the mind.

So, you hyped for Waffle Crew: Civil War? And are you #TeamDiath or #TeamPaultin?

Glados131: Team Diath most definitely! It bothers me that Paultin cares much, much more about an evil construct than any of his party members. There is a chance Murderbot could have been an asset, but it is far more likely that Murderbot was going to royally screw over the others on more than one occasion. I think he shot Strix with a dart that knocked her out when they were fighting the hill giants.

Very true. It is, however, worth noting that Murderbot's main goal was to find someone who actually enjoyed his company and wasn't afraid of him-- something that Paultin actually gave him. And it certainly seemed like he was capable of showing actual gratitude for that in the last fight went he went to save Paultin from the chieftan. Now, would Paultin's friendship eventually be enough to completely sway Murderbot away from evil? There's really no way of knowing. It's possible that he would eventually try to take his revenge on Diath for Arabelle's death, but now we'll likely never know. I don't know if I'm more on one side or the other, but I really like that it feels like you can make an argument for either.

I find the whole situation simply AWESOME due to the fact that the moment I genuinely cracked up was back in season 1 in the Vistani camp when Paultin yelled: "WHO IS THIS MURDERBOT EVERYONE KEEPS TALKING ABOUT?!"

The way the story unfolded is just amazing.