Adventures in Eberron - The Shadow Dragon 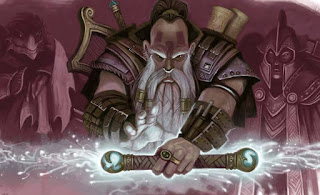 This past Sunday we played some more of the 5e Eberron campaign. I am running an 8th level sorcerer with a big beard.

Our group in this castle trying to rescue the soul of a warforged. Apparently, this situation occurred as the result of the warforged drawing from the deck of many things long ago.

The Sleeper: We headed to the torture room and in there, we found the soul. The warforged's soul appeared as a light-skinned elf that was strapped to a torture device.

I don't know anything about Eberron and I really like learning about it through playing. I learned that in Eberron, where warforged souls come from is a bit of a mystery.

The soul was bound by three chains, each with a padlock. We had found one of the keys already. We needed to find the other two to free the soul.

We continued to explore and ran into a really strange gravedigger. He talked about how once we freed the soul, "The Sleeper" would awaken and kill us. The Sleeper was a shadow dragon!

I couldn't figure out what we should do once that happened. When we freed the soul, should we fight the dragon or just try to escape the castle?

We headed upstairs and actually came upon the sleeping dragon. It was resting partly on a throne. We saw a secret compartment in the seat of the throne, but couldn't get to it without risking waking up the dragon.

Fighting Babies: After that, we headed to the top floor, which is full of bedrooms. We ran into a little kid who could transform into a giant. This little crapper tried to push us down the stairs. We beat him up.

It's a little weird fighting kids in D&D, even giant ones. I remember reading about how they were going to put a monster called a "carabum" in the Fiendish Codex II. A carabum is a devil baby with wings, like an evil cherub.

They decided they probably shouldn't put babies, even devil babies, in the book.

I think it might be OK if you have it where the baby is clearly made of goop, or it's a construct. When “slain,” it reverts to liquid form and will reform soon.

I think cherubs need to be in D&D. I think they are hilarious. Maybe that's just me. 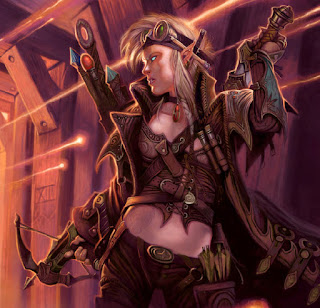 The Succubus: Moving on to the next room, we ran into an NPC who pops up quite often. She is Tanya, a succubus with big 80's hair.

Tanya said all this mysterious stuff. Clearly she was up to something. I decided to lay it on the line. I told her that she needed to pick a side. We needed to know if we could trust her (I know we probably can't but I think it will be fun to see what happens).

We got into this big conversation and she revealed that she wants to draw from our deck of many things. We have hidden it in a special place.

We heroes discussed it. The fighter and I were cool with it, the wizard was not. We were obviously wary that Tanya was going to try to steal it or do something nefarious. I said I would hold the deck and she could draw from it.

I told the succubus that I was going to trust her from here on out, and as far as I was concerned, she was an honorary Interloper. That's our group name: The Interlopers. We interlope regularly and are always defeated by our greatest foe: locked doors.

Later, I brought her a bunch of flowers with a note attached that said: "Interlope responsibly."

The Shadow Blossom: We continued exploring. We came upon a conservatory with a crazy gardner-type. He attacked us and I thought this was a good time to put out the old wand of wonder. Unfortunately, it filled the room with a stinking cloud.

That's the thing about the wand. I'd use it all the time, but I don't want to hurt the other heroes. I always make sure they are cool with me using it before I do so.

There was a shadow blossom in this room. It fed on blood. I put the dead body of the gardener at the base of the blossom. It grew quite large quite fast as it drank the blood.

The White Bride: After that, we found the white bride, one of the owners of this place. She was a cambion. It's tough to pick the right spells as a caster. I knew that taking fireball would be a problem as a lot of creatures have fire resistance or immunity.

I made sure to take magic missile as a backup. The thing is... magic missile is boring. Fireball is awesome. Anyway.. she was immune to fire.

I have a dagger of venom. I drew it and used an action to coat it with poison. I repeatedly tried to stab this lady but melee isn't my thing.

Our fighter took her down. The poison on the dagger lasts for one minute. I charged blindly into the next room hoping there was an enemy to stab before my poison ran out. I ran right into... a swarm of bats.

I stabbed at them and rolled... a natural 20. I killed a swarm of bats with a single swipe of my dagger of venom. I like to imagine it as if I stabbed a single bat and they all dropped somehow because of it. Or maybe I hit one, which caused a chain reaction where the bats bumped into each other and caused a bookcase to fall on them or something. 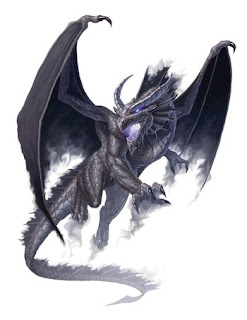 The Final Battle: We found one key in the bride's room and another in a temple. We rested and then freed the warforged soul.

The dragon came right after us! We all spread out, using the interconnected rooms to our advantage.

Our wizard is very smart. She ran to the throne and pulled open the secret compartment. In it was a chest full of the dragon's treasure hoard! She put it in a magic container and rejoined us. I had completely forgotten about that compartment!

Our fighter had two arrows of dragon slaying, but he had a hard time hitting. The dragon breathed on him, and down went our fighter!

The dragon turned and went at the wizard. I ran over and administered a potion of greater healing to him.

The dragon breathed on the wizard, and she went down!

I ran through some side rooms and was able to give the wizard a potion while the fighter fought the dragon.

Then we unloaded on the dragon with all of our big spells. It's immune to fire, consarn it.

It had two hit points left, as I understand, when it breathed on the fighter again. He actually died. Not death saves... just dead.

The dragon had two hit points left. One level 1 magic missile took care of that!

Our fighter is dead and our excursion through the castle is over. We still don't know what the heck is going on with the deck and the Lords of Dust.

Next time, we're going to bring the fighter to a temple to get resurrected. Honestly, I kind of like it when characters die once in a while. As a player, I want to feel like there is legit danger in an adventure. If someone is going to die, it should be during a fight with a shadow dragon, right?

It was a good game as always. We're playing online and it works just fine.

The DM just emailed me the dragon’s treasure hoard. Here's the loot: