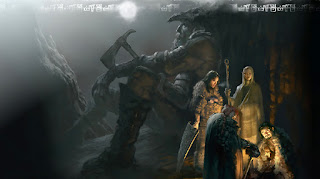 Episode 38: Icebreaker
No Nate this week. Joe Hills is here playing an NPC - Harshnag! That should be cool. Joe does stuff on youtube.

Harshnag is a pretty major NPC in Storm King’s Thunder. He triggers a very important scene about halfway (?) through the adventure. 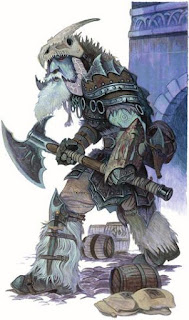 The group is at a dwarven stronghold called Citadel Adbar. Some of the dwarves there are possessed by evil creatures and turned on the others. The heroes helped to subdue the insurgents.

With the battle done, the traitors are taken to the dungeon.

A dwarf wearing black armor with glowing golden eyes enters the throne room. Strix rolls a 20 on an arcana check and deduce that the armor is magical and aiding his perception in some way.

Diath learns a bit about another clan in Adbar. Azon Bronzefire runs the most influential clan. They are master forges and smiths. His bodyguard is Krak Dragonspore.

The dwarves try to figure out what the message Zog was trying to bring to them. They think it has to with... the Ring of Winter! It is an artifact that can control white dragons and all sorts of other stuff. Chris had said on twitter that the ring will play into a future storyline, so this should be interesting. The search for the ring is part of Storm King’s Thunder.

There’s a lot of discussion and planning between the king and the heroes. The heroes agree to go check out the fire giant lair of Ironslag and see what they are up to. The dwarves are nice enough to equip the heroes with whatever the need. Here’s some of the stuff:
An adviser, who Chris does a version of the Barmy voice (my favorite) for, says that the group should team up with Harshnag, a frost giant.

Simon needs darts. The dwarves want to dismantle him. Evelyn shuts this idea down. We learn that Murderbot reloads his darts through a panel in his stomach.

Evelyn gets her new clothes as well as two matching kerchiefs - one for Waffles and one for Simon. She should matching clothes for Paultin, too. Maybe when he’s passed out drunk she could put them on him.

Diath is quite thrilled to have such a simple mission. All they have to do is scout out the fire giant lair of Ironslag and find out what they are up to. An adviser warns Diath not to let the fire giants discover them. He doesn’t wan the giants to come after Citadel Adbar.

As the group walks through the citadel, they see the chained ogre again. He's been stoned into unconsciousness. The dwarves have been beating him down. The group feels bad for him but doesn’t do anything. What is the deal with this ogre? I wonder if Chris has a voice ready for him.

Strix can't stand Evelyn's super-clean gear so she puts a piece of dirt on the back of Evelyn’s cloak. Evelyn immediately senses it and gets angry Strix blames Simon, who gets scolded.

The group starts their journey through the snow. They come upon a tower encased in a sheath of ice. Krak, the dwarf bodyguard who always wears a helmet, is with them. 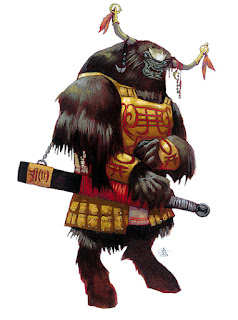 A giant hawk is circling the tower. Diath spots multiple shadows up in the tower. They are watching him.

Nearby, Harshnag eyeballs the group. The heroes greet him. Krak introduces them as the waffle crew. I find it quite amusing that they are called that in the actual campaign world. Harshnag thinks that yakfolk have invaded his tower.

The heroes and Harshnag enter the tower and they come upon the yakfolk. As the battle plays out, Evelyn rolls a lot of 20's. She is being really hilarious today, she keeps talking to Harshnag about being friends and he has no idea what to make of her.

The group makes relatively quick work of the yakfolk. Harshnag does not take one point of damage, something the group is quite proud of. Somewhere in here Anna teases the chat about how some of them complain she can't remember stat stuff. She is cracking me up left and right today.

After the battle, Evelyn needs to clean the blood out of her fresh new clothes.

Harshnag says he had run into some fire giants earlier. They and their hobgoblins were searching for adamantine.

The group cleans up and that’s where we stop.

Fun show! Ironslag is really cool, this should be very interesting. Also, Holly said she's going to make a Waffles doll. That's pretty awesome. The Strahd puppet was fantastic, I can't wait to see this one.
Posted by Sean at 12:50 PM