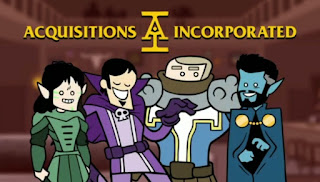 You can watch this show on twitch here.

If you missed it, you can watch the Acquisitions, Inc holiday special right here.

It is time for another Acquisitions, Inc show! They are in a weird, transitional time. This live show is going to set up the new season of the youtube show, where Jerry, the guy who plays Omin, will be the dungeon master.

The animated intro to this thing is so great. These things are really well done and really funny. I would love to see them make an animated version of one of these entire live shows. I'd imagine that would be ridiculously expensive to do.

Viari is staying with his Dunstucker family, for now, so we’ve got Kris Straub jumping in. He does all sorts of internet stuff. 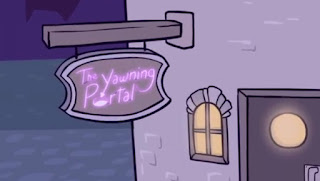 The heroes are 9th level and the group is still staying at the Yawning Portal. At the end of the last game, Omin learned that his sisters are dead. Their bodies are in Waterdeep’s temple of Tymora, goddess of luck.

Chris starts us off asking each player what their character’s morning routine is:
We learn that K'Thriss was invited to join Force Grey. He's been spying on Acquisitions Inc to see if he should join them instead. He likes to watch people sleep.

His morning routine is quite weird. A long tentacled shadow merges with his shadow every morning.

The group meets and interviews K'Thriss. At first, Jim is threatened by the idea of having another caster in the party. But by the end, he thinks K’Thriss is cool and he wants to get matching tattoos.

With K’Thriss joining the group in what seems to be an unofficial capacity, we move on to the temple. We learn that Auspicia died when the cloud castle crashed. Portentia committed suicide when she found out Auspicia died. Wow, that’s pretty crazy.

Omin casts raise dead on the corpse of Portentia. It doesn't work. Omin senses that something has stolen her soul. Omin breaks a stained glass window in anger.

To try to figure out what is going on, Omin convinces K'thriss to cast contact other plane. With this spell, he must make a save. If he fails, he goes insane.

His roll: Natural one. 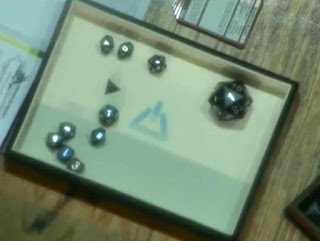 Crowd flips out. This is the really great thing about live D&D. Things like this happen in sessions quite a bit and the crowd reaction makes it so much better.

He rolls on the insanity chart. His result: "I can't take anything seriously. The more serious it is, the funnier it is." Since he’s hanging out with Omin and his two dead sisters, K’thriss starts cracking up.

The priestess in the temple casts Divination for Omin. It is successful, and the priestess reports that Tymora knows why the raise dead failed, but because he broke the window, Tymora is going to make him go on a quest first.

Omin must seek out the Eye of the All Father. He must offer it a gift worthy of giantkind and it will tell what he needs to know. This is right out of Storm King's Thunder.

The heroes will need to bring the Allfather a gift and they have no idea what to get. Omin knows of one giant in Waterdeep... Harshnag! Harshnag was on Dice, Camera, Action this week. I love even the hint of continuity between all of these shows.

Harshnag gives the group a magic ring to give to the Allfather. The heroes board their airship and head out to the north. There is huge video screen behind the group on stage. It changes to show falling. That's really cool and the crowd likes it.

Jim notices something’s not right with his arms. He has black veins and his arm is necrotizing. He's got some kind of curse. Remove curse is cast... doesn't work.

During the journey, Morgaen repeatedly spots a white dragon in the clouds. This is a dragon the group has encountered before. I wonder if it’s the same one the heroes spotted on Dice, Camera, Action back on the first owlbear episode.

Over the course of the trip, Jim's curse gets worse. He loses two of his max hp! Yikes. 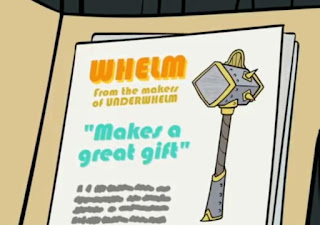 They arrive at the Allfather's place. Outside of it are carvings of giants. There are huge glyphs written in ancient giant. There's a rune for each type of giant.

To the dismay of the adventurers, there are frost giants inside. They may also be here to meet with the Allfather. The group tries to stealth their way closer. Omin rolls bad. A giant hears him and investigates, but doesn't find the group.

The group continues stealthing. Omin rolls another stealth.. he rolls a natural 1! We have ourselves a combat.

The giants are on ice skates and they are wielding hockey sticks. They actually have pucks, too.

One puck hits Omin and does 56 points of damage! He's hit again and now he's dying. Poor Omin spends most of the encounter rolling death saves.

Jim casts animate object and animates a giant statue. It can't walk but it can swing a sword.

As this fight progresses, the crowd gets real shout-y. Individuals keep yelling out rules stuff and suggestions. At first, it’s helpful, but it gets annoying as the rounds pass.

Eventually, a female frost giant arrives and says something to the other giants. They leave. That was a rough fight for the group. It was looking quite grim.

The heroes make their way to the Allfather. They stand in a magic circle and hold up the magic ring, their offering. It vanishes. Morgaen speaks giant and communicates with the Allfather.

They are allowed four questions. Here’s what we learn:
That’s where we stop!

They do a really good job of picking people for these shows. It seems like the most important thing is a quick wit. There is definitely a sort of improv comedy element to these things. Kriss was excellent, as was Morgan.

Something was off about this show. It definitely needed something, a twist or event. Couple that with new players and it makes for a different experience than normal.
Posted by Sean at 2:44 PM

I would love to get inside Chris Perkins' head as he prepared and ran some of these sessions. I've learned so much about DMing just from observing and analyzing his behavior, actions, and reactions. I would love if he started a short web series focused on a deeper level of detail surrounding this. This guy knows his stuff!

Where is the continuation of this adventure?

Garrett: He should do that, a video version of the DM Experience. People would love that.