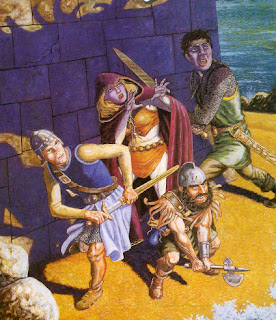 Wyrmsmere is an old 2nd edition Chris Perkins adventure from the Dragon Magazine Annual 1996. It is only 9 pages long and was very easy to prepare.

I heavily modified it. As written, Wyrmsmere is about how a band of NPC adventurers has gone bad. I changed it so that Wyrmsmere Castle is the home of a green dragon that the group needs to deal with. The NPC adventurers are victims in my version, not bad guys.

Prior to the game, I sent the group some maps. The castle map is one of those old isometric deals. 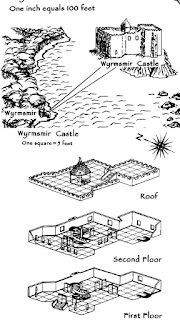 If you look at the map of the surrounding land, you might notice little islands below the castle. If the group goes there first, they theoretically will skip to the end of the adventure.

That always gives me the creeps. You DMs might say to yourself, "They probably won't notice it." But players always do things you don't expect! In these cases, I just remove any mention of the place I'm worried they will go to, and I might even just physically move it somewhere else in the region, too.

The thing about that is sometimes, if you leave it, you end up with a fun session and no harm done. It's a tough choice to make.

Zavagor couldn't make it this week so I whipped up a way to get him out of the forest.

The heroes had just summoned an angel of love and drove off Toxin, the green dragon. I immediately started running Aurora as someone who really wants to spread love and friendship throughout the land. 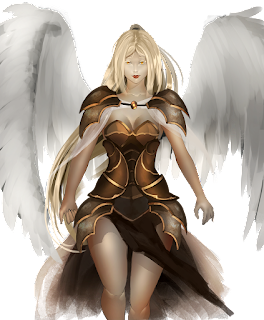 The group headed to Wyrmsmere Castle. It was on an island in a lake about 200 feet from the shore.

The heroes smartly scanned the water and spotted creatures swimming around in there. They got Aurora, the angel of love, to fly them over the water and successfully avoided the creatures.

Before the group tried to enter the castle, Aurora said that the heroes should  express their warm love and fondness for each other. Finy did so reluctantly. Gurn created an illusion of himself saying it, which cracked me up.

The heroes decided to climb up to the roof with rope and a grappling hook. All but Lemuel had made it to the roof when the doors of the castle burst open. Vegepygmies poured out, looking quite ready to murder.

Lemuel was on the rope halfway up. The vegepygmies threw spears at the poor guy and he took a bit of damage.

Lemuel scrambled up the rope to the roof. The vegepygmies ran back inside the castle and up a stairwell that led up to where the heroes were.

On the roof, there was a little shack with a door that lead to the stairwell. Finy heard the bad guys coming up and he quickly rigged up a trap so that his explosive bottle of dragon's breath (made from the remains of the flame dragon) would fall and explode.

The others came up the stairs moments later and a massive battle was had. The group was having problems, because the vegepygmies kept regenerating. A hero would drop one, and it would just get up the next round.

Lemuel realized that fire was the key to killing them for real and spread the word. One mold man got set on fire and Finy tried to dump oil on it, but he ended up pouring some on his leg. His pants caught fire!

Thinking quickly, the angel of love swooped down, took off his pants and threw them off the roof.  Finy spent a lot of the rest of the session questing for pants.

The mold men were slain. Lemuel was hurt badly. The angel of love got to use one of her powers: Chaste Kiss. She kisses you on the forehead and you heal 32 points plus other stuff.

The angels of love are from a 4e ecology of the succubus article. They are what the succubi were before they turned to evil. I love the idea of goody-two shoes love-spreaders, so I actually statted them up for 5e. They're basically a good version of a succubus with some converted 4e powers thrown in. Here it is:

The group commenced with exploring the castle.

Wyrmsmere Castle is odd. There's almost nothing in it. I think that if you write an adventure with a location like this, don't break up the rooms into many smaller entries. Just do one entry for the whole floor and note the three things that are in it.

The group came upon Pellerax, the wizard who had apparently stolen the potions of green dragon control. Now he was hurt badly, partly covered in mold, barely breathing.

The angel of love used her chaste kiss to heal him of his condition. Pellerax explained that the doppleganger Skargle was here, and that he'd used russet mold on him. Russet mold turns you into a vegepygmy. It's in Volo's Guide to Monsters, page 196.

Pellerax told the group the deal: The NPC adventurers stole the potions of green dragon control to try to defeat Toxin, the dragon who is plaguing the city. The group stole the potions from Aryzon (who is secretly a silver dragon) because they mistook his mysterious "wink, wink" nature as an indication of evil, not good. They thought he might be a secret ally of Toxin.

After some more searching, the group went down into the cellar. Pellerax said that he believed there was a tunnel there that lead to Toxin's lair.

In the cellar was a well and a halfling, who was a member of Pellerax's party. They'd gotten split up while battling a horde of mold men before the heroes arrived.

The halfling, Lucky, was lowering a rope into the well. The well was empty and the tunnel was at the bottom of it. After some chatting, Lucky urged the group to climb down. Lemuel began to climb, as did Pellerax. Finy and Gurn stopped... something was off.

They thought Lucky was a little too insistent on going last. They started to question him and Luck got nervous. The jig was up. The halfling suddenly grew and transformed. His pants exploded like the hulk. Lucky was quite upset, because he really could have used those pants.

Lucky revealed that he was actually Skargle the doppelganger.

Skargle CUT THE ROPE. Pellerax fell 100 feet and splatted in the tunnel. Lemuel made his save and grabbed onto a rock that was jutting out of the wall. He was hanging there, about 20 feet from the top of the well.

I think Lemuel climbed out of the well on his first or second turn.

The battle commenced. Skargle smashed a jar on the ground and a spore cloud enveloped the heroes. Russet mold!

They had to save every round, or be poisoned and take damage. If they died from it, they'd become vegepygmies in 24 hours.

A few of the heroes failed their saves, but shook the poison off after a few rounds. They stabbed Skargle a few times and then Finy shoved him into the well!

The group climbed down the well into the tunnel. They saw that poor Pellerax was 100% dead. They headed down a slippery, muddy slope for a few hundred feet. They came upon a room with a pool of water. On the wall, somebody had scrawled "Beware the fish." 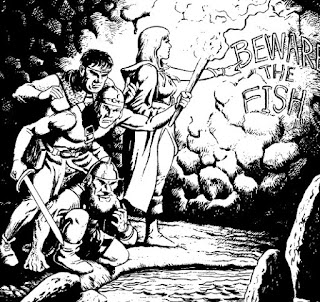 The adventurers saw no creatures or fish in the water at all. They cautiously swam in the water to the exit on the other side of the room. Nothing happened.

The group came to a split. There were three tunnels heading off into three different directions. They took the left one, which led them to an extremely dark cave. Finy cautiously lit his lantern and crept ever so slowly into the cave. Lemuel followed.

The room lit up. The walls of the cave were lined with... Russet mold! That's where we stopped.

I'm not sure if I can convey it in writing, but this might have been my favorite session so far. The players had me laughing for the better part of two hours. The exploding pants, the illusions of hugs, their banter with the angel, it was hilarious.

We should wrap up this adventure next week!
Posted by Sean at 8:58 AM

Sounds like it was a great session! The warning makes me wonder, though: what fish does it speak of?

Thanks for the Angel of Love 5e edition, by the by. Are we to see anymore conversions or new monsters? I'd love to get my hands on some of the creatures you throw at your parties(especially demons, I can't get enough of them).

"Beware of Fish" is a secret thing in this adventure. Once we're done I'll spill the beans!

I will probably be posting stat blocks occasionally. I am working on a devil book for the DMs guild and I have a ton of stat blocks. I'm also planning on making stats for some other stuff, too.

Axel: Thanks! I checked it out, tried to buy it... must wait til April 11th. It will be interesting to see if they fixed the clunky movement.