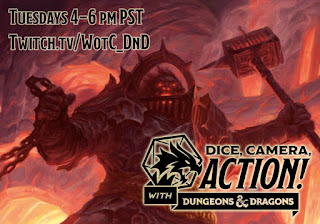 Episode 41: Evil Inside
No Nate this week. Anna spends some time questioning Chris, trying to figure out a way to bring Simon back. It doesn't work out.

Also, it was just announced that an enhanced edition of the Planescape: Torment PC game is coming on April 11th. Strix is from Sigil, which is the city that Torment is set in. The game is very highly-praised and I think it's considered as an RPG classic to some extent. There is a ton of reading involved in the game, so if you are OK with that, you should definitely check it out!

Last week, the heroes fought a bunch of yakfolk. Murderbot was crushed by an earth elemental and Harshnagg the frost giant fell off a cliff and is gone/dead. Paultin has blamed Diath for Murderbot's demise. 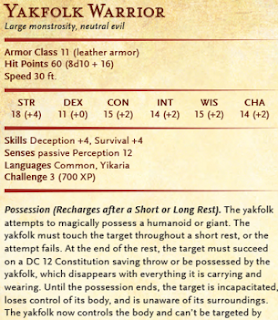 The group gathers the yakfolk slaves together, most of which are naked. They learn that Jasper, the dwarf from Citadel Adbarr is imprisoned in Ironslag.

The group looks for Krak, their dwarf NPC buddy. They find his armor, but he's gone. Evelyn puts on the armor. I’m trying to figure out what Krak is. Some kind of undead spirit? I feel like it’s obvious but I can’t put my finger on it.

The crew loots the village. They find tiki masks, electrum bracers, a spell scroll, 3 potions and a jug with fire genies carved on it which the group gets quite excited about, but doesn't rub.

The crew hands the slaves weapons and stuff to equip them for heir trip home. Two human slaves take no weapons or treasure, and Chris points them out a few times..

Evelyn figures out that Krak's armor is a magic item: armor of invulnerability, giving her resistance to non-magic weapons!

They identify some of the stuff:
Halani, the elf prisoner, tells Diath that if he ever comes to her forest, to seek her out to receive a reward. Then she kisses him, 18-year old Diath is overloaded.

They give Speliotha, a dwarf of the Understone clan, a maul. Evelyn makes friends with her immediately and starts copying her speech patter, which makes the other characters nauseous.


A halfling slave named Dingus Rathill gets emotional and hugs Diath. Other halflings join in the group hug. Evelyn jumps in too. Strix laughs at them. She can see Dingus's butt peeking out of his grass skirt.

Another halfling gives Diath a gem in the shape of a cat. Diath goes, "You must have worked really hard on this during your slave time” and the delivery made me laugh out loud.

She says that she kept it up her butt for three months so the yakfolk didn't find it. Game grinds to a halt as everybody struggles to absorb this information.

It's a stone of good luck! Strix wants it, but has to give it to Diath when the halfling objects. Strix... licks it! Then she hands it over.

Just so you know, later on someone in chat reminds Diath not to forget to add “+1 butt-luck” to his roll, so that’s a thing now.

Oh no... I think those two shifty human slaves are shape-shifted yakfolk. Oh geez, they're going to kill all those slaves.

Evelyn stops them before they leave. She figures it out. Fight!

The yakfolk begin this really gross transformation, where they slowly emerge out of the bodies. Strix polymorphs one into a rat.. so now a tiny yakfolk is crawling out of a rat.

Speliotha aka Spaghetti joins the fray and rolls a natural 20. The yakfolk kills Speliotha - cuts her in two! The group kills the yak and as it falls off the cliff, Evelyn snatches the sword. It's magic! It does +2d6 fire damage.

Anna needs to figure out which three items to be attuned to. She reluctantly gives up Treebane, which, as I recall, is pretty much useless.

Evelyn names her sword "The Heart of Spinelli" to honor the dwarf whose name she can't remember. Diath points out that she shouldn't bother using a fire sword against fire giants. True!

After much planning, the group sneaks into Ironslag. They wander in the mines for a while.

They come upon a room with four chained dwarf slaves. The dwarves are waiting for a cart to come down the tracks.

The group wonders aloud if they are high enough level for this dungeon. Then they notice the slaves are guarded by a salamander. That’s where we stop!

Awesome show! Loved it. Normally I would have been disappointed that the session involved little more than cleaning up the yakfolk mess, but this group is so funny that it doesn’t really matter what is going on in the game. The episodes when it is just these three players seem like they always end up being pure gold.
Posted by Sean at 4:57 PM

Chris made a point of mentioning several animals walking around the village, I think he mentioned a small pig running around or something. My guess is that Krak was polymorphed into one of the animals.

Pierce: !! Wow. How weird would it be if they cooked him up and ate him?

I think if they "killed" him the polymorph would end and extra damage would carry... But I could see Chris just letting them eat Krak. I dunno. I'm super curious to see what the crew does with the Vodinod, and the fire giant daughter.

Pierce: I agree, I think the group would do all sorts of funny thing with the daughter.