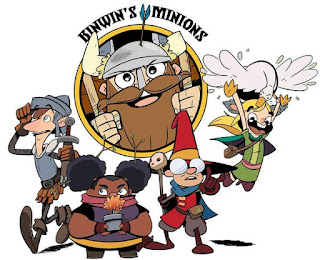 You can listen to this on soundcloud.

It’s only an hour long and it is good.

This game was held a few months ago. Scott Kurtz, who played Binwin on Acquisitions Incorporated, has left to do his own show. Binwin’s Minions will be released as a pen and paper RPG product, and the plan is to make other things like video games out of it, too.

There weren’t any formal introductions. The Dungeon Master is Chris Perkins. Three of the players are Scott Kurtz (Binwin), Tavis Maiden and Bill Roper. There are two other players whose names I can’t find..

Binwin is 7th level, and the minions (the other characters) seem to be like 4e minions: They have one hit point.

The Story: Binwin’s mother gave him a dwarven queststone. The queststones are ancient dwarven stones that contain the soul of a dwarven adventurer. The stone chooses a dwarven warrior to continue questing so that the dwarf spirit can live vicariously through the bearer. The stones can bring people back to life.

So basically, the heroes go through a deadly dungeon. They die a lot, but they’re brought back to life almost immediately. It seems like the stone doesn’t raise the dead until whatever room the group is in has been completed.

Binwin has a map to a place called Keep Ikillya in the Dessarin Valley. The keep is in ruins but the dungeon below is intact. 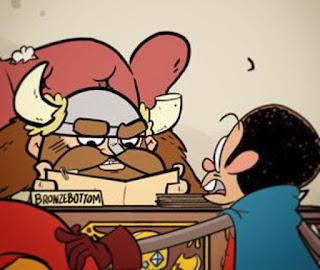 The heroes arrive at the keep. They spot a hole in the wall with a staircase leading down. The queststone in hand, Binwin shoves the druid toward the stairs.

At the bottom of the stairs is a long hallway. There's a yellow gem that glows faintly. There's a lever near it in the up position and a ramp sloping down. There's a message scrawled in the back wall in dwarvish.

The druid is all alone. She decides to.. pull the lever! Wow. There's a yellow flash of light and silence... the rest of the group calls to her. No response.

Binwin pushes the warrior in. The thief quietly follows behind him.

They go down and see a stone d20. The writing on the wall says: "The odds are good that even you will die." He grabs the d20 and rolls it down a ramp.

I think the druid was polymorphed into the die. Chris asks the druid to roll a d20. It's even. Crunching sound. Warrior is dead. So when the heroes roll the stone d20, an even number means they die.

The thief pulls the lever. Flashes of light. Silence. Binwin is at the top. He takes the wizard and they go down. They see two stone dice on the floor.

There's a huge stone hammer floating at the bottom of the ramp. Each of them picks up a die and rolls. It is confirmed that the warrior and rogue have each become one of the dice. They both roll. One odd, one even. The guy who rolled even has a power called "roll backwards." He rolls again and gets odds.

The magic hammer apparently has been crushing killing those who roll even. Binwin pushes the wizard down the ramp. The hammer smashes him to a pulp.

Binwin slides down the ramp. The mallet pounds on his head and he takes 20 points of damage.

At the bottom of the ramp is a door of blue stone. Binwin's the only person left, so he goes to bash it open. Strength check, he rolls a 20! He smashes the door open.

The two dice turn back into the warrior and the rogue. Binwin uses the quest stone to bring the others back to life. 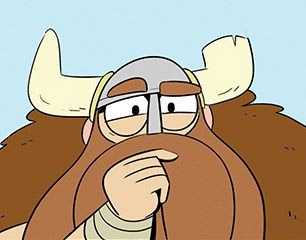 Beyond the door is a long hallway. There's a row of TEN pulsating yellow gems embedded in the ceiling. There are a few side rooms containing kobold masks, bat costumes, windup metal rats, and a suit of dwarven armor covered in mirrors. There is also a carrion crawler carcass.

Binwin puts on the mirror armor. The wizard puts on the bat costume. Binwin winds up a rat and sends it down the hallway toward the yellow gems. Yellow-colored lasers shoot from the gems. Four miss, one hits and destroys the mouse.

The carcass is heavy. All of the minions get in it. Human centipede jokes flying left and right. While in the carcass, the group can actually walk on the walls. They climb across the ceiling and apply green paint to the gems. They paint all of the gems with green paint, which stops them from firing lasers.

Room cleared! Blue stone door. Binwin takes off the mirror armor. I wonder if that armor would have reflected the lasers at his allies. That would have been fun to see.

Binwin bashes the door open. 4 statues of dwarves with levers near them. It’s a puzzle that the crowd figures out right away. Binwin takes their advice and pulls the correct lever. A staircase forms in the floor, leading down.

The Stone Roller Room and the Huge Dwarven Face 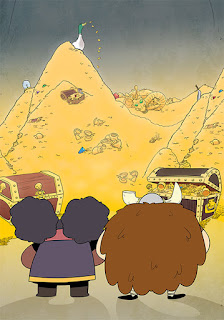 Binwin pushes the warrior down the stairs. Down below is a hallway block by a massive, turning stone roller. Carved into the roller are humanoid shapes. Wow, are they going to have to jump in and ride through.

Binwin wonders how he's going to fill these holes.

The thief has an ability: Disarm traps slowly. He decides to try it. The thief jams his crowbar into the side.. the crowbar snaps. A piece of the crowbar flies into the wizard's skull and kills him. The druid is covered in gore and fluids.

The druid tries to jump into one of the holes. She rolls bad... she gets squashed and the roller is covered in druid blood.

The warrior jumps into a hole... rolls a 20! Gets through. On the other side is the room with a huge, stone dwarven hear. The dwarf’s beard carpets most of the room. There are more yellow gems in alcoves. In the alcoves are treasure chests overflowing with gold.

The warrior tests the beard by dropping something on it. The stone dwarf’s mouth opens and lets out a mighty belch of methane gas. A blast of flame consumes the warrior.

The thief tries to go through the roller. Rolls a 12. Dead! Gore.. his green paint splatters everywhere.

Binwin is all alone. He doesn't want to go in, but he's going to have to. He rolls... 16! He makes it through the roller. What would happen if Binwin died? He has the stone and everyone would be dead. Maybe the stone would raise all of them.

Once he is safely through, Binwin uses the quest stone to resurrect the minions.

The wizard realizes that he has color spray, which probably can nullify the gems.

Binwin throws the wizard over the beard. In mid-air he casts color spray at two of the gems. The spell indeed disrupts their power. The gem and the treasure disappear. The treasure is illusory.

Binwin throws the druid to the other side. She lands safely. She throws her fetching stick toward a treasure chest. It is disintegrated. The druid finds a hidden lever.

She pulls it. A thunking sound comes from the stone head. A stone comes tumbling out of the dwarf's nose. It rolls to Binwin's feet. It is a new quest stone.

The group is dismayed to find out that's all they got. Binwin is pleased. That’s the end!

This was a very fun show, nice and short but a lot of stuff got done. I didn’t really get a sense of what the other players are like. Scott was very into it, and that made it a good listen.

I've always loved deathtrap dungeons, especially as a player. The problem has always been that my fellow players hate them. I have literally had players refuse to even try a deathtrap dungeon, even after much cajoling.

So I really like this show and I would love to run this dungeon.
Posted by Sean at 11:14 AM