My game store asked me to run the Starter Set adventure today as a demo to try to teach people about Dungeons and Dragons Fifth Edition. First I'd like to tell you a bit about the Starter Set, and then I'll tell you how the session went.

I'm not going to bother giving a full review of the Starter Set. There's about two million reviews out there in the wild already. I've been playing "D&D Next" from the first open playtest. I like it. It's nice and simple.

But I am picky when it comes to art. I hate what they did in these books. I like it when art is placed in the book in a little rectangle as if it were a window into a fantasy world. I do not like it when they try to integrate the art with the text, as if the monster was standing there or ripping itself out of the page of the book. It is annoying. To me, it ruins the art. I know you could say that my favorite guy, Tony DiTerlizzi, had whole Planescape books where his art was integrated in and around the text. Well, he's the exception to the rule. His art is so good to me that it doesn't matter.

The art in these books all have "page rips" and "stains" around them. Seriously. It even looks like coffee stains. Why did they do this? Some pages literally look like someone used it to wipe their ass!

And on another note, they are using glossy paper like they did with the 4e booklets. Maybe I am just coated in grease or something, but I've found that if you hold these pages for any length of time, the ink comes off on your thumb and leaves a fingerprint on your book!

On top of that, the books are so delicate. So easy to bend or crease. The paper seems like it's got some built-in memory so that if you bend it, it wants to stay bent. I'd have preferred a heavier cardstock cover.

Furthermore... the art. What is going on with the art? It is so bland and ill-defined. It seems like they are not using Wayne Reynolds or William O'Connor anymore. OK, then, are you telling me there are no superstar artists out there to use? Is deviantart not full of cool art? Does Wizards have no art budget at all?

The art isn't terrible, but it's not sensational or anything, and this is the box designed to impress people, right? Why would you settle for less than the best possible stuff? 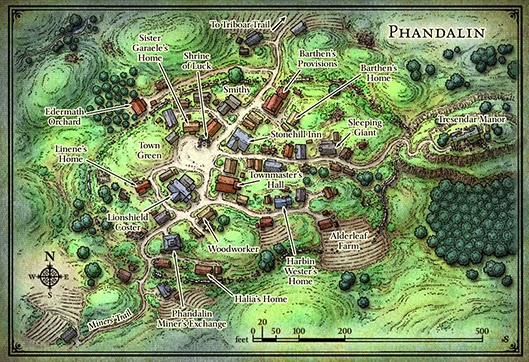 I like the town of Phandalin. It is different but not overly so. It's so easy to fall into a trap when creating a village. Either you make one that is completely generic, or you go too wacky, like making a town on an earthmote or floating on an island in a sea of lava or something. The problem with wacky towns is, if you make them all wacky or special, then none of them actually come off as wacky or special.

Phandalin was destroyed hundreds of years ago, and in the last few years has been re-populated with hunters, farmers, and some shady characters. There's an old crumbling wall half-covered in moss.

I went to the game store knowing there was a good chance I'd have no players. These Saturday things never do too well. I am usually able to scrape up a group. I don't know how much in the way of advertising there was for this event.

I ended up with two players who showed up for a Pathfinder game that didn't happen, and a guy I will call Crazy Guy. He's the one who will come up to me and ask me things like "Do you sell papercut insurance" and ramble on about wanting to buy a straightjacket with a presidential seal on it. He was very lucid today and did just fine. 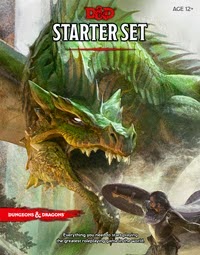 I started the session off with a thing I used to do in 4e - a sort of skill challenge to intro the characters. I wanted them to meet the NPCs in this adventure and befriend them, so that way when these NPCs are captured the players will feel a real motivation for trying to save them.

Our heroes start off in a tavern in Neverwinter (I know, I know) and in walks Dwarf Rockseeker and Human SomethingWinter (It endlessly amuses me how many people in Neverwinter have a name with "never" or "winter" in it). They are happy because they worked out some monetary deal, and yell out that they're buying a round for everyone.

The NPCs sidle up to our heroes and drink with them (CON saves). Some of our heroes become Intoxicated (a playtest condition that didn't seem to be on the list of conditions in the starter set..!). The dwarf got drunk and plopped his gold on the counter. Some shady guys tried to snatch it, and we went into a bar fight scene.

Basically, I just gave each of them a scenario like "a ruffian is about to try to smash a barstool over your head, what do you do?". I'd let them say whatever they wanted and we'd roll to see how it went. This is a nice way to introduce the very basic idea of how D&D works, and a way to get their brains revved up in the right direction.

The best part was when a bad guy slid a PC down the bar and the PC just went along for the ride, snatching and chugging drinks as he went.

I awarded each of them Inspiration for clever ideas, so I got to explain that to them as well. 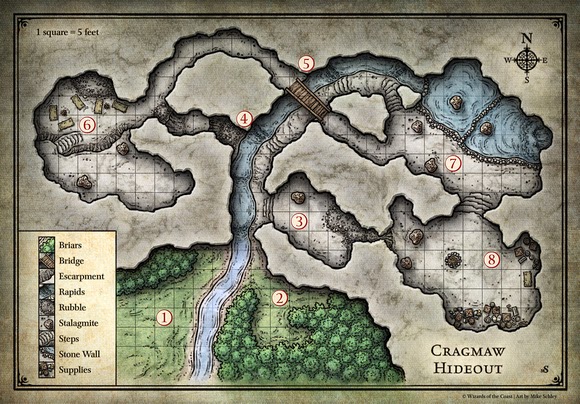 From there we fast-forwarded a few days and got into the actual adventure. I think it is great that the miniatures they released match up with the pregens in the starter set box. Great idea!

Caravan Ambush: They very nearly died. My dice were on fire. It was not cool! The heroes saw that a goblin had a lock of Dwarf Rockrocker's beard and saw a trail that had drag marks on it... they followed.

1 and 2. The Cave: They spotted the goblins in the thicket and took them down.

3. The Wolves: They actually fed and befriended the wolves. I was shocked. They liked the wolves and wanted to keep them. Then, they decided to climb up the chimney, rolled well, and shot right to the final encounter!

8. Klarg: They rolled well and slaughtered Klarg. Thankfully, this module is set up smartly. The prisoner is in another area, so it's no big deal that they killed Klarg now.

7. The Dam: This room has a dam in it. The main gimmick of this dungeon is that when a goblin spots the heroes from up on a bridge, he has his allies release the dam and send a huge flood of water at the heroes, sending them spilling out of the cave. Very cool! But our heroes went the weird way, so no flood, right?

Well, it's funny how things turned out. The cleric was very worried about his throwing axe. All session long, when he'd throw it, his main priority became getting the axe back. In this fight, he threw it, missed, and it landed in the pool. He immediately, mid-battle, dove in to get it. A goblin released the dam, the cleric failed a roll, and thus the cleric rode the wave all the way out of the dungeon!

Worst of all, I rolled to a d20 to see if his trusty axe was near him when it was all over. High is good. I rolled a 1 - the axe was lost forever!

5. The Bridge: The cleric came to with the three wolves licked his face. He got up, trudged back down the hallway he'd been swept in and was spotted by the lone goblin on the bridge. The goblin fired on him. The heroes had finished off their battle in the dam room and converged on the bridge. Basically, the cleric climbed up to the bridge, dodging arrows, and killed the goblin in one shot. It was awesome.

6. The Prisoner: They killed these goblins with ease (I reduced their number because I only had 3 PCs) and freed Human Winterever. Success!

This is a great little adventure and we had a great time. The best thing is that this is just one scenario of out a giant book full of them! This boxed set is definitely worth owning.
Posted by Sean at 12:34 PM

Hey. What to give you the heads up.
http://timbrannan.blogspot.com/2014/07/tbbyanr-power-score.html

Thanks for all your posts!

I'm a big fan of your blog. I like the way you recap sessions, not as a "story of what happened in the game world", but how a DM would tell another DM. This was cool, this wasn't, that guy lost his dice again, etc.

You also inspired me to check out some DCC adventures, I ran Sailors on the Starless Sea as a one-shot last week when someone couldn't make it. Keep up the good work!

Timothy Brannan: Wow, I really appreciate it. I am seeing piles of hits coming from your site. You are the man!

Eodrid: Thank you! It seems like fellow DMs don't talk much about the stuff that actually happens at the table. I think a lot of campaigns die due to real life dynamics. From what I can tell, most campaigns don't get more than maybe 10 sessions in before the group disintegrates due to boredom/conflict/DM who has lost inspiration. I like writing about that stuff. Starless Sea is good! I love the Well of Souls.