Dead in Thay: The Waste-Absorbing Turf 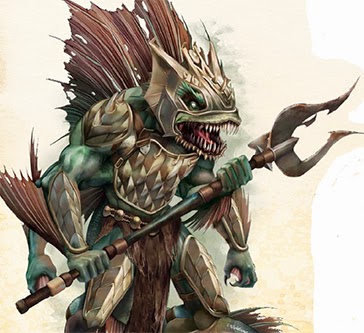 Last week I had three new players show up. I had tried my best to woo them and lock them in, as one of them was a 12 year old girl and I'd really like to see more young people and females playing the game.  I tried my best, but came to the conclusion that I didn't think they'd be back.

I walked into the store this week and.. there they were. Suddenly, my table has 8 players. Pretty awesome! The boyfriend had himself a half-orc barbarian and they came armed with a dice-rolling app. As you may know, most of my players don't own dice, so this was quite refreshing indeed.

When planning for today, I looked ahead and realized that we only had three more sessions after this one. So after today, we are going to jump into the endgame. There will be two weeks of hacking through the Temples of Extraction, where the Chosen of various deities are being imprisoned. And then the last session is the final battle in a series of weird, triangular rooms.

That means that today was the last day to run around willy-nilly in the Doomvault. There is a curious gap in the Encounters schedule. This season ends at the end of July, and the next one doesn't start until August. Are we supposed to just not run anything until then? Am I supposed to run starter set demo games? 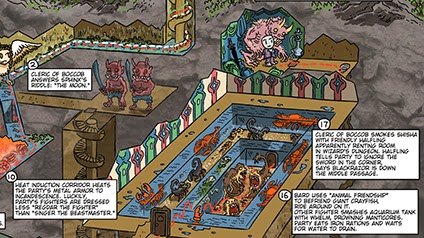 My plan is, after this season, to run White Plume Mountain for these characters. It is an old adventure that I've always wanted to run (I ran it once when I was 14 but did a terrible job), and it will give them a chance to keep using these characters that they like. Also, it lessens the chance that we will lose them in the month gap between seasons.

Eight players is just plain too many for one table, but they behaved themselves this week. The new guy made a lot of comments about how we got through so little of the module in a session, and I explained that there's weeks where we do a total of three rooms. I think part of the reason for this is that the group doesn't use most of their class features, and are sort of the polar opposite of a min/maxer. They're min/minners.

The heroes took two full rests tonight, aging four more years. Very amusing! Again, I know this adventure is supposed to be time-sensitive. Our heroes are supposed to be frantically slashing through the Doomvault in a coordinated assault. But this is more of a "relaxed fit" style game. 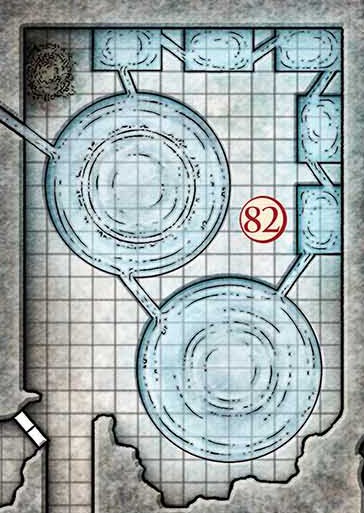 This had some giant pools, 6 giant crabs, 2 merrows and a sea hag. The treasure in the room included a staff of charming, so I decided to arm the hag with it to make things more spicy. I am of the opinion that published modules should always arm their monsters with the magic items and adjust the stat block accordingly. I guess they can't do this in this module due to space considerations.

The hag charmed the paladin and the group freaked out. The staff kept the encounter from being a dull murder-fest. I couldn't remember what merrows were. I see now that they are aquatic ogres. Boy, I screwed that up. I described them as mer-men.

This is a big room with a pool full of sharks and sahuagins. The pool had these platforms on pillars that rise out of the water, ideal for PCs to jump on and hack at their enemies. Except that they are trapped! Those who step on them become paralyzed. There's also one of those hovering globes of water that you can move with your mind and trap enemies in. 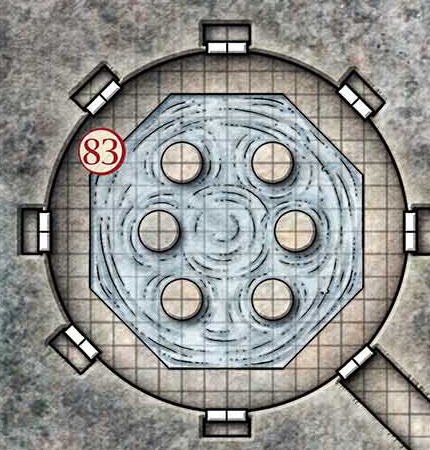 Hack and Slash Guy of course jumped in the pool alone, got chopped up, and barely got out of the pool alive. The 12 year old girl pretty much single-handedly dealt with this encounter, using the globe to scoop up most of the monsters and plopping them on a pillar. I bent the rules a lot for this to happen. I don't think the monsters are able to be paralyzed on those pillars, for one thing. But the idea was fun, and I also want to encourage that type of thinking.

We ended up with a rogue floating in a globe on a pillar fighting a shark and a sahuagin. It was awesome.

She also used her trusty staff of charming to charm the sahuagin baron (not sure if he counts as a "person") and she had him jump onto a pillar, paralyzing him.

Once this was done, I had them find a glyph key to the Forests of Slaughter, which was a place they wanted to check out. Plus I got to use my trusty forest dungeon tiles which look cool after all these weeks of dungeon tiles.

They also found two scrolls of stone to flesh for the upcoming cockatrice encounter... 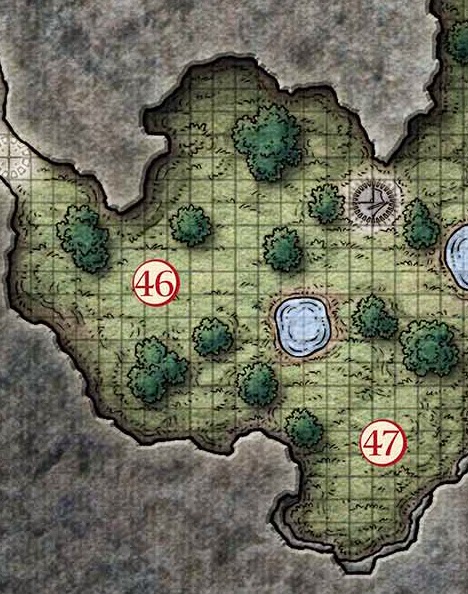 Hook Horrors! They never get used in D&D. They're a little dull, but they're classic and seem a bit under-used.

We had a weird little moment when the adventurers peered into the forest. It started when the wizard sensed that the magic turf on the floor absorbed waste (an odd and fun little detail in the module text).  Hack and Slash Guy decided that his character needed to pee. He rolled to see how long he could pee for (Constitution-based roll, I ruled).

So then Brony says he is going to pee, too. A competition was underway, to see whose character could take the longest pee.

Next thing you know, every single character was standing or squatting, trying to see who could pee the most. I didn't ask, but I'm pretty sure they all went to the bathroom right in front of each other. Obviously, because this is D&D, I had them roll to see who produced the most urine. The wizard won rolling a cool, natural 19. I ruled that the turf was having a hard time absorbing so much waste.

This room has ledges with nests. In the nests - cockatrices! Evil chickens that can turn you to stone! This was a bit different. They fly, so our melee-intensive party were stymied. The cockatrices squawked and tried to turn them to stone.But with only a +4 to hit and a low DC of 10 meant that just wasn't happening.

The heroes had no trouble taking them down. The wizard's lightning bolt was key in this. Wizards are really awesome in D&D Next. I'm kind of shocked we haven't had one up until now.

The starter sets are in, I'll probably pick one up soon. Looking forward to checking it out!