Dead in Thay: The Chosen 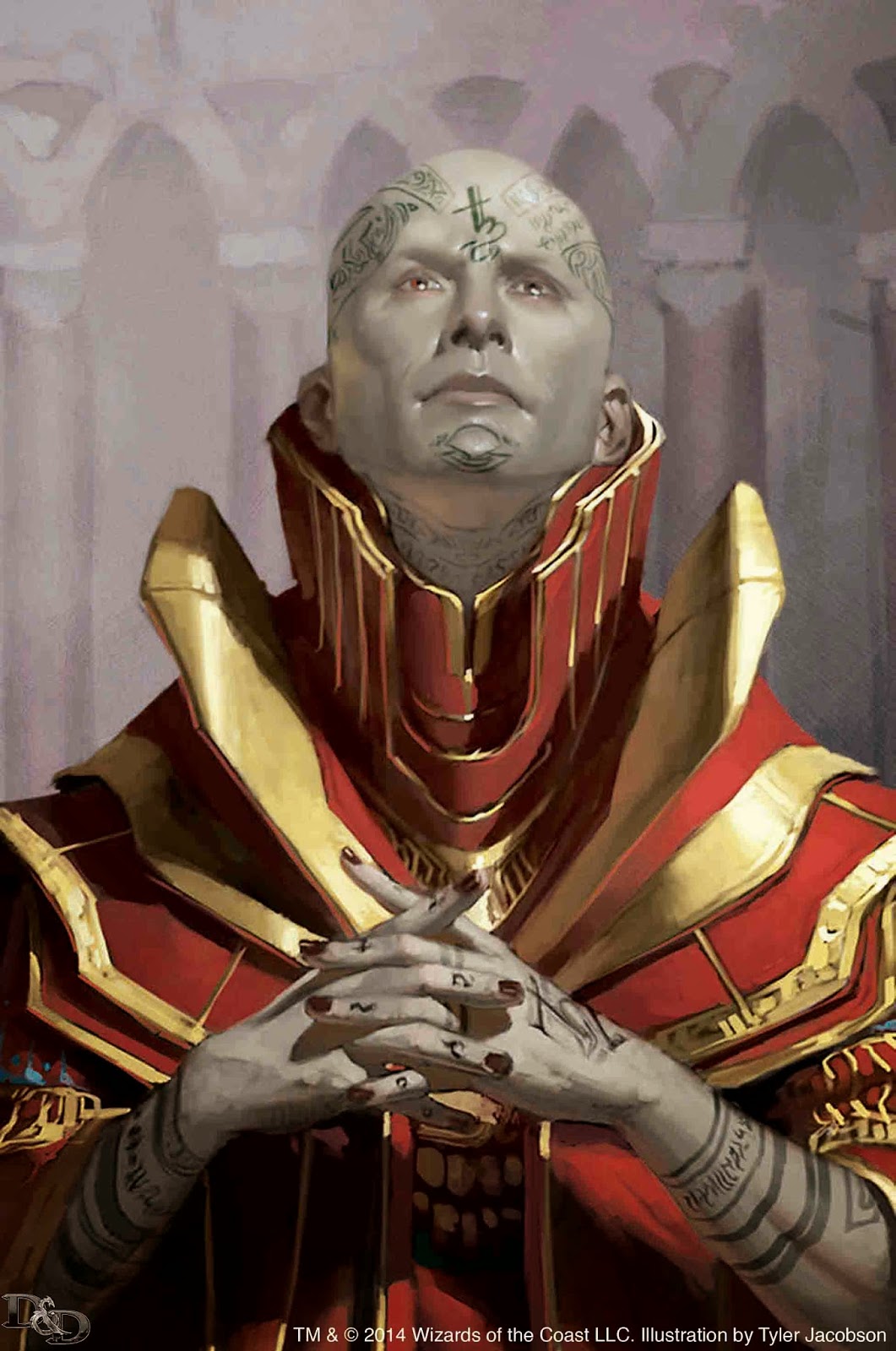 I walked in the store today and witnessed evidence that the new edition is off to a good start. The store had two large stacks of starter sets for sale last week, and this week most of them are gone (Bryce Lynch has a great review of the starter set adventure here). And since the new edition has rolled out, my encounters group has been expanding at an alarming rate.

Best of all, the 12-year old girl brought her friend - another 12 year old girl. I would love to be part of getting more young females into D&D. The key there is to make sure our environment is welcoming. So far, so good, pretty much.

There was another new player this week - a pleasant, outgoing, modern-type college kid. His character's name was similar to "Heineken" and "Hadoken" so I had plenty of terrible dad-joke material to work with.

Our heroes have begun the endgame of Dead in Thay. They have begun to assault the Temples of Extraction! In each of these ten temple rooms, there's a shrine where a "Chosen" of a different Forgotten Realms god is trapped and having his or her essence drained to power the lich's ascension to godhood. A Chosen is a special follower of a god who has special powers.

My goal today was to do five rooms out of the ten. We had to really push, but we got it done. These rooms are cool and I really like the shrines. Basically, each room has a special effect, and then each shrine has to be dealt with. To approach a shrine, you have to walk into an energy field (DC 10 CHA save or take 5 damage and be knocked back). Then you have to destroy the shrines with three DC 15 checks by shattering pillars, using arcana, etc. If you fail the check, you take 5 force damage and are sent flying off the shrine. The shrines added a lot, especially when some of the PCs wanted to kill the evil Chosen that they came across!

In the stat block of the Red Wizards, the module gives you the choice of using different specialist Red Wizard types. Up until now, I haven't done that because I figured it would mean that I would have to look up different spells. For the most part, my villainous spellcasters use Magic Missile, Fireball and Blight. It has been simple to remember how the spells work without glancing down, and the players fear them every time. It had yet to get stale. But I figured that since we are entering the special finale, I should twist it up a bit. I decided to use the Conjurer type of Red Wizards today, because they have a special teleport power. I ended up never using this, but hey it was there.

This whole thing starts off with a real rough dose of reality. The PCs appear in a room full of dark mist that they have to save against or be stunned for a round! This allows the red wizard inside to drop a fireball on them with ease. Yikes.

Once the adventurers overcame the mist and slaughtered the wizards, they took a great deal of damage when trying to mess with the shrine. DC 15 is not an easy roll to make, and they had to make three.

The new guy decided that the Chosen of Zehir in the shrine needed to die. The Chosen was a Yuan-ti follower of the god of assassins, after all. The player seemed happy about the idea of Zehir assassins trying to hunt him down and slit his throat. That might make for a cool encounter back in Daggerford.

This room had red mist that either healed you or hurt you when you damaged somebody else. It was very cool, though I think the mist effect was too weak. It should have healed/hurt people for half the damage they dealt, rather than one quarter.

I keep forgetting about treasure. There are treasure suggestions are way earlier in the pdf, but it's an extra task to deal with when preparing and it's easy to let it fall by the wayside. 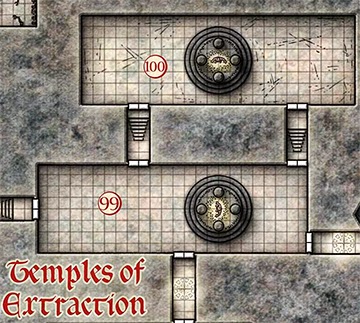 The Chosen in this room was a good guy named Kieren. The heroes actually used potions of healing to try to restore his health a bit.

This room has a "web of pain" effect. When you take damage, you might end up with disadvantage, basically. This didn't come up much, because a good portion of the group stayed in the hallway. I forgot to stack this with the shrine effects.. I am kicking myself now.

The adventurers killed the undead in here, and then took a good squint at the Chosen trapped in the shrine. I described her as a pale, thin-lipped, dark-haired woman wearing all black. She was a female half-elf Chosen of Loviatar, goddess of torture and pain. New guy decided to kill her too, reveling in the idea that agents of two gods would be after him. 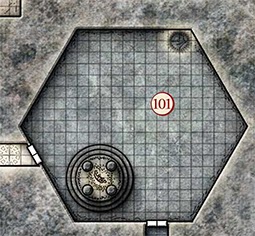 The walls in here are of gray ooze. When you move within 15 feet of the walls, an ooze tendril can hit you for 10 points of damage! This is especially nasty because, well, you have to enter the room, and therefore you must brave at least one tendril attack.

And of course, with this group, they just stayed by the walls the whole time, and thus were getting ooze-tendriled in all sorts of uncomfortable places.

Our heroes killed the wizard, the wight and the oozes in here. They again had trouble with the shrine. New Guy was now on a full-on "Slaughter The Chosen" kick, but the other rogue in the party stepped up and was prepared to defend him with violence.

This Chosen is a drow who is linked to Ghaunadaur, the underdark lord of oozes. The drow was indebted to the brave rogue, and we tossed around the idea of her being rewarded with some kind of blobby pet.

This room was full of "Poisoned Shadows". If a PC took damage in here, they'd have to save or become blind for a short time. 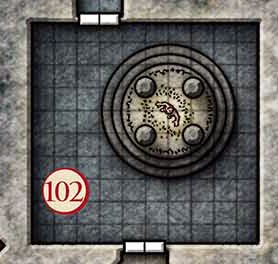 I wasn't prepared to run this one properly. It was an encounter with 6 shadows in a magically-dimmed room. Special rules obviously applied, but I was too focused on getting this encounter done in time and I think it wasn't as cool as it could have been.

The other thing is that the adventurers took a severe beating in this session. The cleric had pretty much used all of his healing, and the group continued to let each shrine beat the bejeezus out of them rather than approaching them with care. These DC 15 checks are not easy. But, the group could have sorted out which PC has the best chance of dealing with a shrine, and sent that one in alone instead of the "Black Friday Stampede" we ended up with.

Another element that makes this room dangerous was that when the Shadows hit you, you take a -1 to all Strength-based rolls (including to-hit and damage). This is cumulative. So, if a Shadow hits you five times, it brings you to a -5 penalty. And you die. New guy ran in this dark room alone, was swarmed, and came very close to dying.

But our heroes persevered, killed the shadows, and I think killed the Chosen - a female drow of Ibrandul (God of darkness).

That's where we stopped, exactly where I wanted us to be. These rooms were easy to prepare, they were creative, they felt fresh and interesting - I love this dungeon. This is a great final stretch. I am looking forward to seeing how the final area - The Phylactery Vault - plays out.