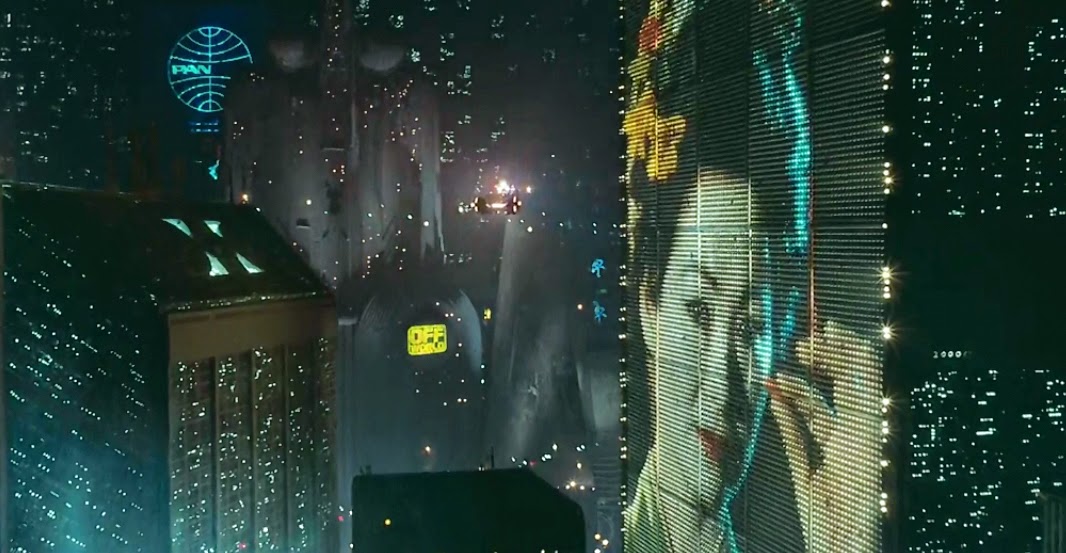 I have talked my "elite" Sunday group into pausing our D&D next/5e campaign to play Shadowrun for a few weeks. Shadowrun is a game that I've always liked, but I never had any sort of grasp on the rules.

We're going to do two more sessions of D&D, which gives me a couple of weeks to prepare. I know it is hopeless for me to try and master the rules in this time, so I am going to run this game "loose" (rules-lite, I guess). We'll do the basic dice pool stuff and kind of eyeball the rest. This is a group that is on the same page as me. They prefer concocting a swift solution over grinding the game to a halt over some rules dispute.

When I think of sources of inspiration for Shadowrun, I think of a couple things: Blade Runner, Akira and Queensryche. I know Neuromancer is a massive influence on the game, but I just can't get through that book. What excites me most about Shadowrun is the opportunity to create a satirical setting, taking real life stuff such as the Kardashians, Men's Rights Activists and prescription drugs and twist them up for my own purposes in the campaign. 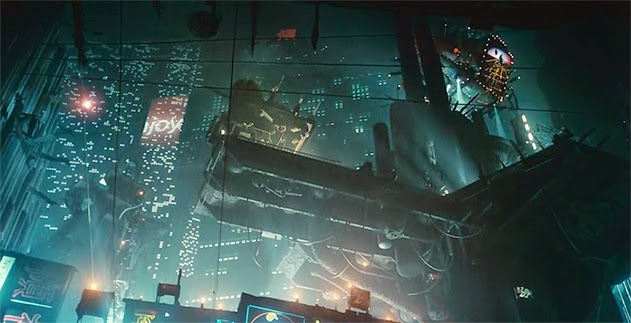 I watched Blade Runner. I'd seen it once before but wasn't really paying attention. I think the appeal of the movie lies in the setting. The pace is slow, allowing us viewers to soak up all of the neat little touches. I'm a big Harrison Ford fan, but he wasn't at his best here in my opinion. Then I read up a bit and learned that he didn't like working with Ridley Scott at all and it made more sense. I've also read people talking about what a bad actress Daryl Hannah is. I thought she was fine. She had a real memorable look in this movie.

I made a list of things I saw or came up with as I watched that could be useful:

- Huge video wall on the side of building, geisha eating a strawberry

- An NPC who does origami of shadowrun monsters

- An NPC with one eye blue, one eye red?

- Whole blocks of the city are empty. People are moving away. 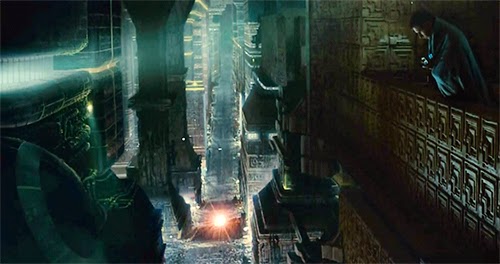 - Video-chatting with women in prison. This is from a podcast I listen to. They were talking about how you can pay $9 to talk to a real-life female prisoner for half an hour. The possibilities here.. wow. I will probably have an NPC contact of the heroes (in the game I believe a contact is also known as a "Mr. Johnson") who is a comic book guy-type who has a "girlfriend" in prison. That might be a very handy contact, honestly. If the PCs give him 9 bucks (errr... nuyen) he can have his girlfriend ask around the prison and dig up dirt for the PCs.

- Lit-up codpieces. I am vastly amused by the idea of a high tech codpiece. What does it do? Maybe it can convert urine into a laser beam to shoot at enemies!

- Image cube: A holographic cube that is a 3d photo of a room. This would be perfect for a crime scene. 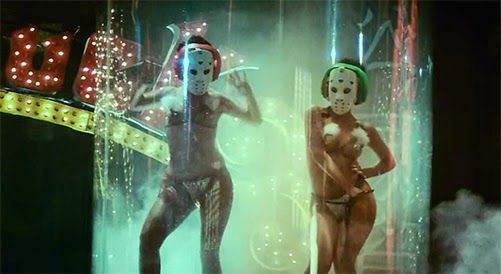 - Female dancers/strippers in hockey masks. This was an odd little thing in Blade Runner. The hockey masks didn't quite work for me. I think it might be cooler to have them wear masks of stylized japanese devils?

- Hair dryer: A clear globe. Put your head in it and hot air whisks around. You probably remember this from Blade Runner with the snake-lady. It was hard to hear, but apparently her stage show involves "taking pleasure" from the snake..? Harrison Ford hears this, makes a face, but then turns and watches.

- Smartglass window tint. You probably remember this from the movie too. I'd imagine you could come up with all sorts of other cool ideas for tech-glass. I should probably check out google glass to see what that can do.

- Umbrellas with glowing handles/poles. This was one of the most noticeable touches in the movie. It went a long way toward creating a futuristic setting. It looked cool and it made sense. 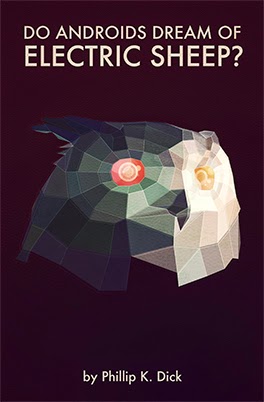 Then I read the book Blade Runner is based on. Well, ok, I listened to an abridged audio version of the story. It is called "Do Androids Dream of Electric Sheep?" by Phillip K. Dick. I've never read anything by him before (I read mostly non-fiction) and I was none too thrilled with how in the book our hero Deckard is married and cheats on his wife with seemingly no guilt or repurcussions.

I read more about Philip K. Dick and was astonished to find that Total Recall and Minority Report are also based on his work. In fact, it is entirely possible that the "colony" people are leaving Earth for is on the Mars of Total Recall! How crazy is that?

"Androids" has some very cool ideas in it. There are these machines called Penfields which people use to control their moods. They type in a three digit code and boom they can have three hours of joy, or program themselves to go to sleep, or even schedule 4 hours of depression.

I like this idea a lot but I want to use pills, partly because I associate the pill logo on the back of Kaneda's jacket in Akira so deeply with my idea of what Shadowrun is. I also like the possibility that, like in real life, when you don't have access to these pills, you get a little wacky and maybe have withdrawals - but in a fun, Shadowrun way.

Also in the book is a popular TV show called "Buster Friendly and his Friendly Friends". I love this and definitely want to cook up some celebrities, movies and TV. I plan on devouring the Shadowrun pop culture book Shadowbeat and will use that as the basis to create some fun, sarcastic pop culture stuff. 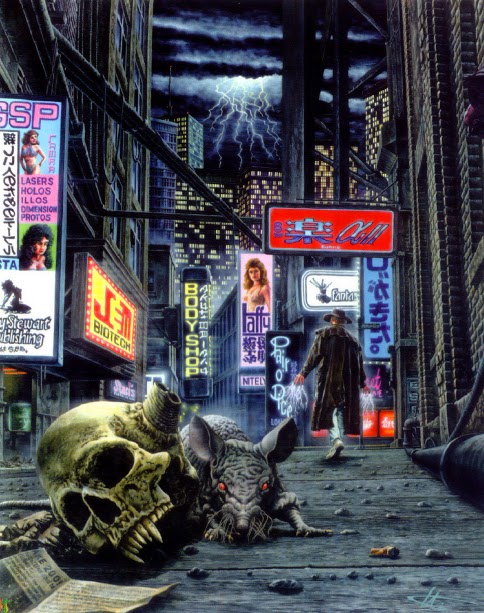 I know that there is Shadowrun slang out there already. I think the slang word I remember the most is "chummer". I was never big on their slang. Same with Planescape, too. I appreciated the effort, but I was never able to call someone a "berk" and have it come off in a way that was beneficial to the game. It was always a distraction. It could be that I simply didn't commit to it enough when playing my NPCs. By creating slang I am comfortable actually saying out loud at the table, I think it will have more of the desired effect.

And of course we'll need a bunch of japanese swears. I will use "Kusottare" liberally.

In the book, animals are mostly extinct. Owning a pet of a real-life animal is a very big deal. There's a touch of this in Blade Runner, when Deckard sees the owl at Tyrell Corporation. He is told it is synthetic. I don't find any of this particularly useful for a Shadowrun Campaign.

There is also a whole plotline about this pseudo-religion called Mercerism, and whether it is a hoax or not. It is really odd and I kind of didn't like the whole idea. I do think that corrupt politicians and religious figures are a pretty big part of Shadowrun though, so I may try and work that into it in some form.

What I want out of Shadowrun is motorcycle fights (like in Akira), Sin City-esque NPCs in strip clubs and seedy bars downing shot after shot slung by cyber-broads, and of course rainy nights and flickering neon signs.

I started going through Shadowbeat, and should have a full report on it soon. It has a lot of material on playing a Rocker or member of the press as a character (who the hell would want to play a reporter as a PC?). I was vastly amused about the section on "Sasquatch Rock"...

I have Dead in Thay today. We shall see if the group continues to grow...

Sounds like you are going in an interesting direction with your Shadowrun game. I will be interested to see how it works out.

There's a lot, really, based on various works of Philip K. Dick. That list doesn't mention it, but the film Soldier was originally written as a sequel, or as the author considered it, "sidequel", to Blade Runner, and includes many references to the Ridley Scott film and various PKD works.