Dead in Thay: The Tragic Tale of the Promo d20

Next week is the final session of Dead in Thay! I have really enjoyed this season. I don't understand why there is a month gap between the end of this season and the start of the next one. I plan to convert White Plume Mountain to fill the void.

I want to start tooling around with the starter set rules to slowly get these players acclimated to the actual for-real 5e rules. I told them about Inspiration, and they liked it. Inspiration is a new thing in 5E where the DM can reward a player for playing their character well. I give you inspiration (an "inspiration point", basically) and they spend it when they want to get advantage on a roll. We'll probably start using it in a week or two.

I've had 9 players the last few weeks, which is double the usual amount. The new edition is definitely bringing in new people. This week, many of my players were on vacation. Maine, Sweden, you name it. I still ended up with 5 players, with one of them being brand new.

The things I am about to write about may come off as if I am more angry than I actually am. Tonight was a good session. I'd give it an 8 out of 10. I was happy and people seemed to have a good time. So this stuff I am about to rant about is more just me venting and pleading with the world at large to curb a few behaviors for the sake of DM sanity. I really don't care that much, but I'd really like to end the madness once and for all.

I have pet peeves, as you know. One of them is when people tie on initiative rolls (I am aware that this is just me being crazy). The players all know to just compare DEX bonuses, and if it's still a tie to roll again. But every single time, the game screeches to a halt and I have to stop everything to take them step by step through the process. It is utterly excruciating. I try so hard to keep things moving and interesting, and this initiative thing kills it every time. It gets real old when people who have played with me for 6+ months still have a car crash every time they tie on initiative.

My other pet peeve is Sloppy Dice. Tonight, one dude kept rolling in the crack where our tables were pushed together. He rolled to hit, the die landed in the crack and was cocked, unreadable (though sometimes if it's half on an 18 they'll weakly try to claim it). So he rolled once more... RIGHT INTO THE CRACK AGAIN! I was beside myself. He rolled it directly toward the crack. Why?! Why?!?!

People. When you roll a die, just roll it in your little space in front of you. Don't spin it backwards. Don't fling it so it bounces off a container. And for the love of everything you hold dear, don't roll it toward the edge of the table! Please! I am begging you! Why would you ever roll it toward the edge of the table?! Ever? It goes from amusing to slightly annoying to "I can't believe you really did that again, how is that even possible?!"

There was so much freaking sloppy dice tonight it was bewildering. The dice-flinging actually built like a disaster film, with each incident more extreme than the last.

One of the best things about this Encounters season is the cool 20-sided die you receive just for showing up. It is black with red lettering, and it has a cool symbol for the number 20. Hack and Slash Guy lost his a month or two ago. I got the store to give him a replacement. 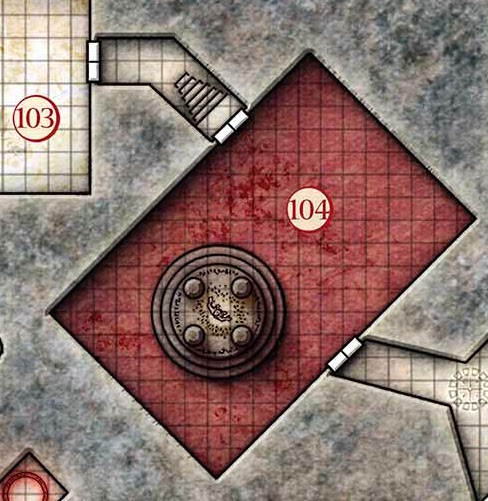 He is the guy who owns no dice at all but plays faithfully every week. Correction: He owned one die - the free d20. At the start of tonight's game, I gave him a set of dice from my Starter Set, still in the bag. It was mostly a "thank you" for showing up every week for many months. It was also a way to just finally get the guy some dice and end our national nightmare.

Guess what happened? He freak-rolled his black encounters die - the replacement for the one he'd lost - right off the table and into Parts Unknown. The game screeched to a halt. Everyone was on the ground, poring over carpet fibers. Where could this thing have gone? It couldn't be far, right? All hands on deck, the group was determined to turn over every rock. After about two minutes, it became obvious.. the die was gone, somehow. Gone! He lost his second promo d20!

I will try to get him another replacement, but I have to say that things look grim indeed for the shiny blue starter set that I handed to him tonight. I may have dealt those little fellows a death sentence.

I kid you not when I say this: Sloppy Dice partly prevented us from doing 5 dungeon rooms tonight. Five measly rooms. What also didn't help was a new guy who had a character made from a previous playtest packet. This happens all the time. People come in and start citing these weird-ass rules from late 2012, then get crestfallen and lost when they are told their character is obsolete.

A monster we didn't get to tonight was the will o wisp. This is probably good, because that thing has a gimmick I never thought I'd see again: SAVE OR DIE. Look at that stat block, there. Holy crap. I can just feel the D&D version of the x-box controller-throwing rage all across the nation in the months to come.

DMs, warn your players about this well in advance! Prepare them. Say, "Just so you know, this adventure has a few monsters/traps that have a save or die effect." This will lessen the shock when it comes, and it gives your group an opportunity in advance to discuss whether you even want to use save or die stuff in your game.

Here's the three rooms we did. Three rooms! 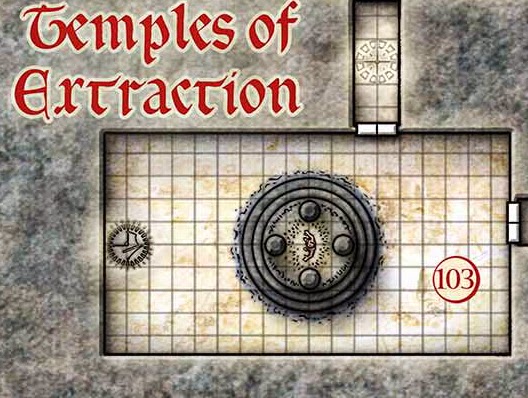 This room has a red wizard, a flesh golem and a wight. The room has a luck effect in it where if the PCs roll ones or twenties, special things happen. For example:

Unfortunately, there weren't many 1's or 20's rolled. Fireball is feeling less effective thanks to tieflings taking half damage from fire, and the rogue ability to cut the damage in half.

The flesh golem was scary. It did a lot of damage. But our heroes persevered and freed the little Chosen halfling from the shrine (this whole section of the dungeon has shrines that siphon godly power from special NPCs linked to the gods known as The Chosen).

This little halfling was in the last encounters season, and I don't remember this being foreshadowed at all. This adventure says he didn't know he was a Chosen. That is really lame to me. It's like they just decided this. I would have liked to know so I could foreshadow it and do stuff with it to make this feel like something more. Eh who knows, maybe it was in there and I just don't remember. It just feels to me like a Chosen should be a big deal with some crazy powers, not some goofball NPC.

They actually do this again a few rooms later. The Ice Witch from the Crystal Shards season is a Chosen, too. 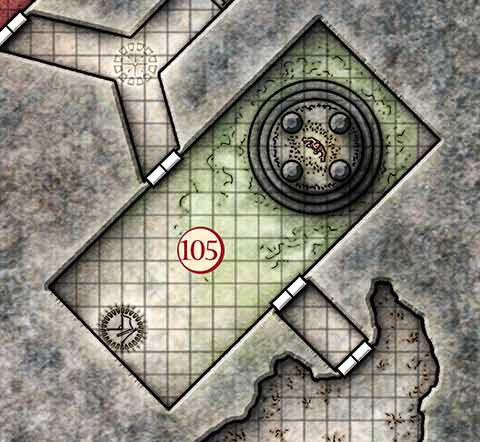 In this room, you take damage if you don't cause damage and you also have to save each round or be consumed with bloodlust. This means you'll make an opportunity attack against anyone, including allies.

This room was rough primarily because shutting down the shrine became a deadly affair. This group continues to just rush the shrines and get hurt by them due to bad rolls. If they hid in the hallway and sent one specialist in, they'd be much better off. But as I've said before, they don't learn even when you tell them directly. 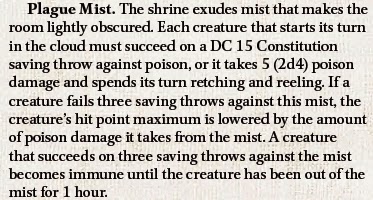 This room has a plague mist in it. The plague mist is.. wow. Save or do nothing but vomit for a round! Crazy. This module definitely ramps up, big time.

We barely got through this. It took us two hours... two hours! To do the first two rooms. Unreal.

The mist made shutting down the shrine another deadly task. But their dice suddenly caught fire, and they made their checks in record time! Good for them, it seems like my groups have been plagued by bad rolls lately.

Unfortunately we won't get to the last two rooms, as we need to go through the final section next week. I'm probably going to print out a poster map at Office Depot for this. It should be great!
Posted by Sean at 8:20 PM

Sounds like some frustrating fun! I share your pet peeves. I am teaching my kids right now, and the sloppy dice is a plague on us.

Yeah, it was a fun session but the sheer abundance of sloppiness was overwhelming!