The Starter Set is out, and our store seems to be selling quite a few already. Be sure to download the basic rules (completely free!).

I've been meaning to read up on Hook Horrors for quite a while. Before I get to that, I just want to mention some stuff that has happened in my games lately. I should get to run a D&D Next version of Doom Cave of the Crystal Children this Sunday night, and I should have a nice review. It is a very interesting adventure though it is not for everybody. You can easily strip out the stuff that doesn't fit your sensibilities (the sexual stuff and the earth pop culture stuff, most likely). It is definitely worth owning. 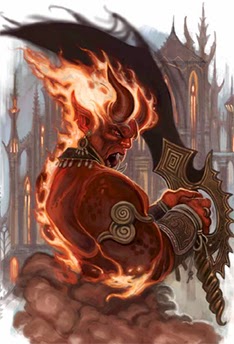 I've been running a 4e for some of my encounters kids. I ran a scenario for them in the city of brass today. It is a scenario from an old Al Qadim boxed set, Secrets of the Lamp. There is this fire genie with an albino nightmare, and the PCs end up riding it while being chased through the city. I don't have to say any more, right? It's already awesome.

This scenario didn't go as good as it should have tonight. I think I have been relying on the 45-minute 4e tactical combats to fill our time rather than focusing on the fun stuff. I actually abandoned a clever idea of theirs to marry their bipolar deva NPC to the efreet to run a lame fight with some giant scorpions. I will avenge myself next week.

When I ran Dead in Thay the other day, the heroes went into a room inhabited by Hook Horrors. I had forgotten all about these monsters. They are so 1980 to me. The thing that sticks out the most to me when I think of them is the fairly recent event at wizards of the coast where a pile of hook horror action figures were discovered in their warehouse.

Hook Horrors originally appeared in White Dwarf magazine and were reprinted in the AD&D Fiend Folio - the tome full of creatures that ran the gamut from Creatively Weird to Incredibly Crappy.

There's an ecology article in Dragon 131. It has a kind of cool piece of Jim Holloway art. He is very hit and miss with me. I feel like he did way too many purposefully goofy pieces of D&D art. His Spelljammer booklet covers were really good. I wish he would have done more stuff in that vein, as opposed to drawings of a cross-eyed guy picking his nose, or whatever.

The article is written in character by a scholar named "Ferba" from "Quardolf City". Frankly there's not too much to this.

It starts off like that Seinfeld episode where George interviews to be a bra salesman - "Two cups in the front, two loops in the back. How do they do it?" Hooks, feathers, vulture head... it's a beautiful thing.

Here's what we learn about Hook Horrors: They eat fungus. They are immune to shriekers' powers and eat shriekers. They lay eggs. They molt. They communicate to one another through clacking noises. They eat silver and electrum coins, because they grind up food in their stomachs. The have some gimmick where they are immune to certain deadly funguses but they carry their toxins/diseases with them.

Here's the most interesting thing. Their exoskeleton can be made into armor. It takes a month to make armor out of it, but it is almost as strong as plate mail. You know, kind of like a Tortle.

I guess not every monster can be the greatest thing ever. But the hook horror has always felt not quite fully-realized. I am not sure what is needed, but clearly something is needed.

The Hook Horror from AD&D second edition features a piece of Tony DiTerlizzi art that gives them more of an insect look. I don't really like it. I think out of all the depictions, I really do like the cartoon version the best. It is huge and muscly, it feels like a real threat. This version looks very brittle and small.

If these guys hit you with both hooks, they get a bite attack. They are good climbers. They cannot hang from the ceilings.. uh actually that would be awesome.

In this version, the exoskeleton dries and becomes too brittle to use after a month. No more hook horror armor? Lame.

The 3rd edition version of the Hook Horror has a pretty cool Baxa painting. A lot of this entry is identical to previous ones. It feels like the hook horror just hasn't gotten a lot of attention. They are just kind of tossed in the book to fill space.

These 3rd edition horrors are experts at sundering weapons and armor. That's a very cool feature - their hooks tear shields in half and ruin armor. I think that is a great idea.

They are sensitive to bright light, which makes sense given that they live in the underdark.

The 4th edition version of Hook Horror is just kind of there. I really hate that they gave it whiskers in the art. Goofy! It really speaks to the malaise surrounding this creature.

The 4th edition hook horror prefers meat to fungus and love to eat drow. Drow kill them and raise their young as slaves (not sure how useful they are with the hooks for hands and everything). That's an interesting detail. Maybe making Hook Horrors haters of the drow could lead to something cool.

What do you do with a hook horror? An umber hulk does what they do, but better. They feel like they are missing something, but I don't know what. The thing that springs to mind is the skeksis from the Dark Crystal. But they are too much of a leap from what the hook horrors are.

I guess they are just mooks of the underdark. Slow-moving schlubs, cannon fodder. Like Sleestaks.

1. The PCs have to cross an underdark chasm by using the ceiling and a climbing kit (like in this scene from The Descent). A PC is halfway across... and hook horrors come swinging toward them, easily finding grips in the rocky ceiling.

2. A battle by the edge of a cliff or dangerous pool, where the hook horrors could fling the PCs in or over..

3. The heroes spot low-life drow who wear hook horror plate armor and mistreat their young hook horror slaves as they use their clacking to lure out adult hook horrors.

4. A cavern of total darkness. The horrors use their sonar and enhanced sense of smell to close in on our heroes.

5. Shriekers are big fungus-creatures that let out shrieking noises to attract prey. Violet fungi sometimes pair up with shriekers, lashing out with tentacles to poison and kill creatures. Hook Horrors are immune to these fungus creatures' abilities. So, our heroes hear a shriek - which is cut off. A hook horror is eating the shrieker. A violet fungus lashes out, but only succeeds in making the horror's hooks poisonous for a short time! The adventurers are now dealing with a poison-hooked armor-tearing stab-you machine.
Posted by Sean at 1:54 PM

I completely agree. Hook Horrors always appear as an idea, that never was developed into something. Like Dire Corbies.