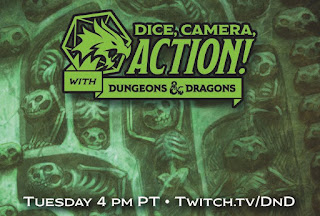 Episode 85: Two and Two Together
Very good show! A lot of the players went to conventions this weekend and got sick. They're all here though.

The group is in the Shadowfell. Last time, the ring of winter ditched them. The heroes don't know what happened to it, or where Miranda went to. Lord Nihil was slain. There's fallen ice sculptures all around him.

Meathook, the undead ogre zombie, is still here. Strix puts a blanket on his head and declares that his new name is Hooky the 3rd. Chris says that Meathook's full name is, I think, Meathook Enderavente.

The heroes are cold. There's nothing to salvage in the inn. Nate is really sick in real life, but he's here. What a trooper.

The group gets into the carriage. Meathook can pull it, but they need to motivate him to do so. They get Meathook to walk by dangling food in front of him with a stick.

Izek, Strix's brother, is still with the group. Izek is upset because his dolls are gone. Strix begins to argue with him. He takes one of Strix's dolls and chucks it out of the cart. Diath goes to get it. Strix explains to Izek that he needs friends.

Izek points out that Diath is a Lorcatha, "The family that tried to destroy us". Izek tells Strix, "You can't be friends with him". Izek yells at her.

At this point, the carriage is stopped. Evelyn pins Izek to the ground. She casts zone of truth. It affects Izek.. also, Diath. Paultin is in the zone and says, truthfully: "I don't feel good."

Izek mentions something called the Ashton Concordance: No Skizzix or Lorcatha can ever be together. No friendship or alliance.

Izek urges Strix to kill him. "If you stay with him, you'll destroy everything. You two can't be together!"

Evelyn: "What do you mean they can't. They are!"

Diath throws Gutter to the ground and points at the sword. "Apparently that's his. Ashton. He's no father of mine."

Izek wants Strix to go to Vallaki and look at Lady Wachter's books. The group could learn more about the Skizzixes. Diath points out that they have more pressing issues. They need to stop the Soulmonger. 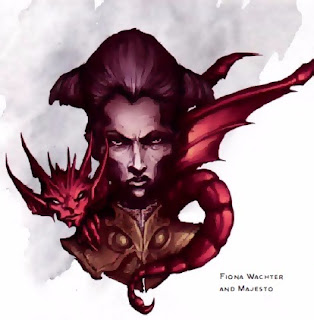 Paultin makes a snow angel and goes, "Look, it's Diath."

Strix polymorphs Izek into a chicken. Strix tells him she's not leaving the group. She changes him into a spider and the group leaves him behind.

15 days pass. Each character (except for Evelyn) loses 5 from their max hit points due to the death curse. I think Diath is down to 18 hit points!

Each day, Evelyn becomes more distant from the group. She spends quite a bit of time away from them.

One morning, when Evelyn goes off to pray alone, Paultin follows her. He sees her praying out loud.

Evelyn says that she thought she was special... she thought Lathander would bless her with a life mate. And she thought Paultin was hers. She has been tempted by darkness. She's been weak and selfish. She loves Paultin more than she should and it's turned her... it's more than she can handle on her own. She asks Lathander to wash it away and pledges her loyalty to the Morninglord.

Then it starts to rain.

Paultin goes, "Did you really mean all that?"  He casually sits next to her. "You put a lot of faith in that god of yours. You should be working for yourself rather than hoping that Santa Claus is going to help."

Paultin asks if she remembers when he tried to kill everyone. Paultin apologizes He said he wanted the ring of winter.. he lip in a comment about how everyone in the subreddit deserves an explanation haha!

Paultin says he never felt like a contributing member. He was always dragged along. The others have so much they're good at. Strix is magic, Diath looks he's 18 forever, and Evelyn is the strongest person... really strong. Paultin is just the drunk, the silent player.

When Paultin saw the ring, he thought he'd finally found a way that he could contribute. He realizes now that the ring led him down a dark path.

The rain makes it look like Evelyn is crying. Evelyn says that she should do her job better and that she's sorry, too.
Paultin says they should never talk about it again.

Paultin and Evelyn hug. Paultin looks at you, the viewer and says, "Chat, you can't rush this stuff."

The heroes travel on for a few more days. The air changes quite a bit. They can hear the sound of the ocean.

Uh oh. They realize that Meathook is about to walk them off a cliff!

Holly tries to remember the command word to make him stop. "Spaghetti!" Yikes. That's the one to make Meathook go faster.

Saving throws. They rolled bad, except Jared, who got a 34.

Diath gets out, and grabs Simon and pulls him to safety. Paultin holds onto the cliff. Diath pulls him up.

Evelyn plummets over the side. 100 feet! Strix saved herself via flight. She looks for Evelyn through the fog. Evelyn survived. She pulls herself free. Meathook is in four pieces... impaled through a rock.

The group checks out the beach. All along the coast are wrecks of hundreds of ships. They create a jagged mass impaled on tooth-like shards of stone. The walls of the cliff are white. The beach is black, dark pebbles.

Snow on the beach? Nope. bones. Millions of bones!

Strix casts remove curse on Evelyn. It gets rid of the Shadowfell despair. She does the same on Diath. Ha! That spell does everything.

There's a cave in the stone of the cliffs. The group hopes there's a portal home in there.

Evelyn senses undead from the ships.

Paultin and Diath see.. swooping down from high above.. a gigantic, roc-sized bird. Its black. A gargantuan raven!

It transforms into thousands of ravens. They coalesce into a figure. The Raven Queen! A 6 foot tall human-shaped mound of twigs. A walking nest. 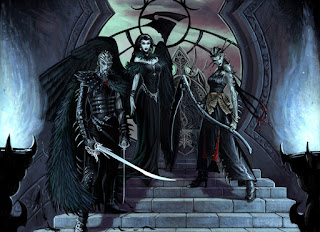 She is speaking in Celestial. Evelyn translates in a very polite manner. "I have come for the chalice and hand".

Evelyn asks, "Which hand, my friend?"

"Your fate has been stolen from you. You no longer need those treasures."

"For what purpose did he need the treasures?"

"Return them to me and I shall reward you. A consolation prize."

Strix is on the ground covering her head. She's a little panicky.

Paultin hands the items over. Ravens swoop down and snatch the items away.

Suddenly, the Raven Queen goes from 40 feet away to 5 feet away. She's right in Paultin's face.

"Is there something I can give you? I know what you want."

What's this? Simon, the evil little golem, suddenly ha a human mouth. Has he become real?

Great show! If you are looking for action, then you might not like this one. But if you're into the characters, you'll love it.

We discussed all the gory details on Waffle Talk:

Really, i kinda fund this show exausting, we dont see very much progression in history or characters, they are just people wandering the world without objectives or ties to anything, they look like a 3rd lvl group. Also the pets trope is becoming obnoxious and boring.
The characters have awsome roleplay, but the game is repetitive