Trapped in the Birdcage Episode 2

OK, people! It's time for Birdcage, episode 2. I loved this episode. Definitely check it out if you have the time.

Also, check out the subreddit for Trapped in the Birdcage.


Last time, the group was magically sucked into a tea shop run by an old wereraven named Crone. She needed the heroes to deal with a few problems. She showed the group her gigantic pentacosm and then the adventurers went under the tea shop, where they fought two mephits. They saw a vision in a magic mirror of cranium rats killing people in Sigil. An injured dude stumbled into the tea shop. That's where we left off.

Holly says that this injured fellow is a bariaur named Wooly Cupgrass! That's an NPC from Faces of Sigil! He lies there, bleeding, as the group stares at him. He asks for healing.


Saturn realizes that he can cast cure wounds. He's hurt, and is inclined to heal himself. Crone sighs and gives Wooly a healing potion.

Crone tells the group that they need to find two other wereraven women named Mother and Crone. Nejma isn't thrilled with the idea of going to find Mother.. thinking it's her Mother. Nejma apparently broke some stuff and isn't welcome. Nejma is awesome.

We are told that Maiden is in the Great Gymnasium, which is a location from In the Cage. I love how Holly is using all of this stuff right out of the books.

Crone mentions in passing that "Crone" isn't her realm name, and that her real name is really boring. And... now the group must know. She doesn't want to say. Saturn casts zone of truth! Thee people are hilarious.

He casts it. Crone is going to make a Wisdom save... failed. We learn that her real name is Adele.

The adventurers hit the streets of Sigil to check on Wooly's shop. They get a look at the weirdness of the city.. it's inside a hollow donut... there's city above them.. planar citizens... 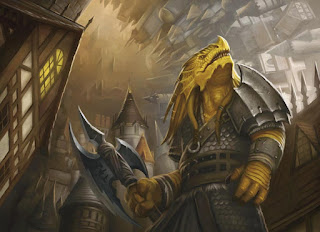 Nejma had kept a piece of the broken mirror. Looking through it, he can see a sort of augmented reality.

Wooly's trail of blood is easy to follow. The group gets distracted, though, to Reader's consternation.

The group witnesses some sort of transaction go down. Nejma makes an insight..a 2. he thinks it is a planar crack deal.

The group realizes they should have asked Crone for more details instead of bugging her about her name.

Reader can't help but notice that a child slips in the blood trail that the group should be following.

The group chats up a tiefling rug seller. They cast charm person on him.

Saturn notice that a rug is shaking. He wants to steal it. How is he going to hide it? Who knows.. he touches it. It's a rug of smothering!

Wil is hiding. Here comes some (I assume) Harmonium officers. They're looking for thieves. Wil makes another stealth. 14. She has this magic omnidress that can change forms. She changes her gown into a glamorous blue toga type thing.

Reader tries to pull the rug off of Saturn. Another rug jumps him! The adventurers realize that this tiefling is not selling decorative rugs.. these are security rugs!

Nejma wants to set the rug on fire. I love the idea that she is always starting 3 alarm fires everywhere she goes.

A crowd is gathering. Nejma goes, "Ladies and gentlemen, please stand back... please step out of the splash/burn zone". Died laughing. Performance check: 16!

The crowd thinks it's a show. One dretch is super into it.

Reader is blinded and restrained. Reader takes 7 damage. He's down! Defeated by a rug. Death save... 1 success.

Nejma makes a minor image of huge moths, which scares off the rugs. The tiefling is unhappy. Saturn solves this by kissing the tiefling. The tiefling smells bad.

The group grabs unconscious Reader by the ankles and drag him along.

Knowing that the rats have been abducting potion sellers, the group decides to buy some healing potions. They find a potion dealer. They test the potions.. rub it on their gums.. I absolutely love the idea of expired potions of healing. What weird side effect could they have?

Nejma sips it. Her tongue turns purple. They dump it in Reader's mouth. It does heal him, but he also turns green. Groggy, he asks, "Did we buy the rug?"

Wil scans the streets for a wealthy person.. spots a tiefling. Gold on their horns. Possibly a magic user. Wil says, "Look at the coin purse on that one."

The two armored guards look right at Wil. She tries to bluff..

Nejma casts darkness! The heroes flee into Imel's Happy Tongue, which is also detailed in In the Cage: A Guide to Sigil. A waitress asks, "How many?"

"Four Please." They hide their faces in the menus. Holly is rolling with all of this incredibly well. She is so smooth and polished. I think a lot of DMs would struggle with these shenanigans. Some might try to railroad the group. Others might get too heavy-handed with the town guards. Holly's 100% along for the ride and it makes this very enjoyable.

There's a monkey. Nejma wants to steal it. She ends up in an opposed strength contest with the monkey. The monkey rolls a NATURAL 20. It takes her mirror piece and runs. Nejma snatches he monkey with a mage hand and drags it back over.

Reader, flummoxed, starts writing all of their crimes in a book. I love the idea that he starts keeping track of things the group does - fires started, things stolen, seduction attempts, etc.

The monkey leads the group through the streets for about a mile. They get to an open area of marble and stone. Like a Greek coliseum. The Great Gymnasium! Lots of naked people. Jimmy uses the Zoom in function on his camera for effect. Dude is hilarious.

A woman groans. Are these the people they sent me?" It is Kylie! Kylie the tout is a fairly famous Planescape NPC. She helps people get where they are going in the city. She has this furry pet called an ethyk. Its name is Dib (Dybb?).

Reader wants to find someone to talk to about the crimes he wrote down. This poor dude is totally out of his element, it is very amusing.

The heroes can't help bu notice that there's a bunch of naked people working out in this Great Gymnasium. Kylie leaves the group for a minute and Saturn immediately starts talking to dudes.

He flirts with a guy who has buzzed hair and a lovely mustache and sideburns combo. His pickup line: "Can I play my triangle all the way to your heart?" Rolls a 10. Amazing.

Nejma flees the depravity and hides. She is uncomfortable around all of this gratuitous nudity.

Wil steals from a gym bag. She loots... an onyx panther figurine. Holly has a trinket chart she's rolling on.

Reader again tries to nudge the group on. He reminds them that most crimes that aren't solved in the first 48 hours go unsolved. Again... I died laughing. Great show!

Kylie comes back. he is crying. What...? She melts into rats! They swarm all over.

Saturn busts out a thunderwave. Jimmy is new to the game but he is all over this. Yes, the triangle triggers the thunderwave. He hits his allies, too. Reader's down. Nejma uses another potion on him.

All the athletes look right at the group. Saturn winks at all of them.

Their dretch fan from earlier is here, cheering them on. He chucks gold at them.

Uh oh... everything is melting away. This entire thing is an illusion! They see cranium rats everywhere, even in the sky.

Then, suddenly, Kylie's next to them. "What are you doing? We have to get going!"

I love this show! Holly is a really, really good DM. The group is firing off curveballs left and right, but she doesn't miss a beat. It's so smooth - no pauses or stumbling. The rug thing - did she pull that off the top of her head? If so... amazing.

I guess if you are wanting the plot to progress, you might not like this episode as much as I did. But if you like shenanigans, you definitely need to check this one out. What a great group!
Posted by Sean at 8:30 PM

The effortless way Holly has been describing the City of Doors with all the color from In the Cage and other sources is pretty amazing. Fleshing out that cheese board (on the fly it seemed) and her role-playing her tiefling waitress was so good!