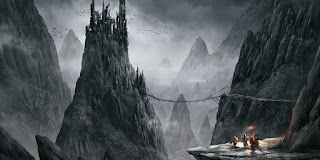 Episode 83: Ice in the Veins

Waffle Crew vs. Paultin? I guess we'll see. We get the Barovia intro again.

(Rachel Seeley) Miranda- Elf Druid
(Anna) Evelyn - Human Paladin of Lathander
(ProJared) Diath - Human Rogue
(Holly) Strix - Tiefling Sorcerer
(Nathan) Paultin - Human Bard
Previously.. the crew was separated. Paultin has the ring of winter, which is turning him evil, and he ran off into the Shadowfell with it. He also took his severed hand and the skull chalice of Ch'g'kare.

The rest of the group went after him.
Quite a bit of time has passed. Chris declares that the group has been traveling for a month! Diath and Strix are sharing the protective ring. Their max hp drop by 16! Well, that's not good.

Each week, the viewer count has been going higher and higher. Right now it is at 2,032 viewers. The highest I've seen is 2,300.

Paultin's hair has turned black and grown quite a bit. His skin has taken on a blueish tinge. He's not bothered by the cold. Outside, he hears laughter.

Nariciano and Levarda are out there having fun.It's snowing. The shadar kai want to make a plan to fight the waffle crew. They're concerned with the heroes who can fly.

The waffle crew is walking along in the Shadowfell. They come upon someone hanging from a tree via noose. Wait... just a shadow. Only Diath can see it. Jared says that Paultin has this sense that he is going to let his friends down. He is trying to fight it.

The group has blindfolded Waffles so she doesn't attack anyone else.

Lord Nihil is traveling with the group. He says that if he dies, he asks the group to avenge him. The shadar kai murdered his family and tore off his face.

The shadar kai start talking about the Raven Queen. The ring says it was her elves who made the ring of winter.

Paultin is checking out the chalice. The shadar kai want to buy the chalice from him.

A carriage arrives. It's a gypsy wagon.

There's a wine delivery. Paultin casts locate creature. He wants to see if Diath is within a thousand feet. He thought it was a trap! Wow. It's not a trap.

Driving this carriage is... Izek! Strix's brother! He's got some guards. The alcohol he's delivering is from Gauntlgrym - dwarven ale. Eep. That's where Strahd's puppet is!

Izek says "hurry up, we've got to go. This is a rotten place." It looks like he lost his demon arm.

Paultin doesn't remember who he is. He strikes up a conversation with him.

One of the shadar kai asks Paultin who he's talking to. She suggests killing the guy. Paultin rolls to see if he can remember. Natural 1. The rest of the group knows it's Izek, but Nate doesn't. I think he missed the biggest Izek episode and Dee filled in for him.

Meanwhile, the heroes see the wagon heading toward them. It is pulled by two horses. Evelyn rolls to see if she thinks it is real. Natural 20!

Strix sees Izek and screams for the group to run. Miranda shrugs and gets on Lord Nihil's horse.

Strix confronts Izek. He says he's a changed man. He says he lost his devil arm when he tried holding on to the wagon way back when.

Izek says that when the arm came off, something in him died. The part of him that could only see hate and fear went away.

Izek tells Strix, "We were both cast aside, left to the mercy of those in that terrible place called Barovia."

Evelyn walks up and goes, "This wagon is totally real."

Izek makes dolls. Like Blinsky? He tosses something to her. The Strahd puppet! Mr. Shambleface! Izek says "we got this in Gauntlgrym." Drizz't brought it there long ago.

The Strahd doll! Is the group happy? No. No they are not.

Evelyn really likes Drizz't. She says she misses him. Hey, Drizz't is a cool guy. How weird will it be if the group ends up higher level than Drizz't?

Izek says that Strahd might be the only one that can save them from Paultin and the ring of winter. Lady Wachter told Izek to bring Strix the doll. Wachter cares about Strix.

How many charges will Paultin spend to make his ice dragon? The ring has 20. He uses 9 and his attempt fails.. Hmm. He might have to use all 20.

The ring is on page 207 of Tomb of Annihilation. Normally, making an ice creature costs 4 charges and the creature needs to have a CR 2 or less. This must be a special thing. Pretty awesome!

Normally the ring has 12 charges, but in the Shadowfell it has 20.

Paultin goes to bed. The shadar kai climb in with him..?

Here we go. The Waffle Crew has arrived at the inn. The group sees Paultin. He has blue veins on his arms and neck.

Somewhere in here we learn the backstory of the Raven Queen. She and a few elves tried to cast a big spell, but it did not go off as intended. In despair, she sunk into the Shadowfell. She put a lot into the spell and became weakened.

Many of her elven servants followed her to the Shadowfell. They became shadar kai.

She became a deity bound to the Shadowfell, an emblem of death who uses ravens to make sure souls get where they need to go. Sometimes she locks away special souls to keep - people of destiny. Good and evil people. She helps them achieve their full destiny.

A raven approaches Miranda. Uhhh... Raven Queen? It wants a trinket or memento. She pulls out her yew wand. The raven accepts it.

Then... Paultin meets... the Raven Queen. Twigs and stuff. She gives Paultin a wand.

Strix assumes the form of Strahd. She flies ahead of the group. Strahd on a flying broom.

She sees the tavern - it's 1,500 feet away. Snow is weighing down the roof. Battered coach with an ogre zombie strapped to it.

Paultin runs into the tavern and rearranges furniture. He spots a hunched crone made entirely of twigs. Paultin pulls out the chalice. She's making creepy noises and pulls back into the shadows. She's gone.


Strix is attacked by the shadar kai assassins. 34 damage from one. She's down. The other one stabs her again! She fails two death saves.

Diath can't fly. He's running toward the tavern. He keeps saying: "This isn't real." He runs through the field of ice Paultins, dodging them. Evelyn flies through, smashing them when she can.

In the tavern. Strix disappears in a cloud of oily smoke! Just like when she was summoned by Acquisitions, Inc. Holly is going to be on C-Team tomorrow.


Miranda gets darted. Simon! She needs to make a save vs. the poison. 19!

Paultin decides to attack Miranda. He casts banishment on her. She need to make a saving throw, or she magically teleported back to her home plane. She rolls a 17! She makes her save. That's where we stop.

Very good show. Nate knows his stuff! I love it.

We talked with Rachel about this episode on Waffle Talk: