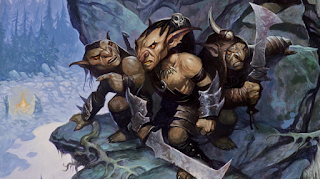 You can watch this episode right here.

Anna, who plays Evelyn on Dice, Camera, Action, is going to DM her first game! She's running the Lost Mine of Phandelver, which is the introductory adventure from the D&D Starter Set, which you can get right here.

I love it when people run official adventures because I can either learn what's in it or, if I own it, I can check the book and see what's next.

I ran the goblin caves portion of this adventure in a game store a few years ago and I really enjoyed it. I actually wrote about that session in this blog, which was the only time I ran a game for the "would you like to buy papercut insurance?" guy.

This is one of those basic, classic fantasy adventures done in a way that feels pretty fresh. The goblin caves have a really cool gimmick that makes sense and can lead to a lot of fun things.

The players are using the pregens. This group usually plays 2e (!) so they're going to be learning 5e as we go.

Anna is using Roll20, which is a site that lets you put maps and tokens on the screen. It has all sorts of cool features, but it is very complex. A reader was nice enough to give me a tutorial on it a while back, an I quickly decided that it was too complicated for me. I might take a stab at it again some time.

Gundren Rockseeker has asked the group to bring supplies to Phandalin. Gundren and his brothers are onto something big. Gundred went out ahead of the heroes with Sildar Hallwinter to take care of business.

The group veered east on the Triboar trail, where bandits and outlaws are known to cause problems.
We learn a bit about the heroes:
How did they meet, you may ask. Here's how:
The adventurers travel down the high road. It's nice out. Thoradin feels like Moradin is giving him a warm hug. Guy is driving the wagon.

Thoradin uses his ability to speak with animals to make friends with the Oxen pulling the cart. The oxen is named Jeanette.

They come upon two horses slain by arrows with black feathers on them. 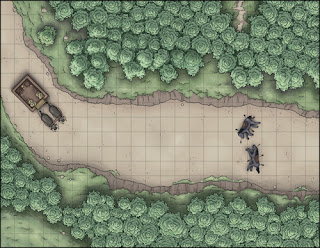 The group is alarmed and they get into a long conversation. Guy talks about the goddess Sune, who might be Thoradin's new god. It sounds like the deity Thoradin wants to worship is Mielikki.

Lylow wonders if it is an ambush. Something's in the bushes, giggling. Guy approaches.

There's a pair of goblins in there! They attack.

Desdonia nails them with a burning hands. Guy is hit with an arrow and takes 5 damage. A goblin gets a critical hit on Thoradin. The poor fellow is truck in the buttocks. The die roll for the damage is low, luckily for the dwarf.

Desdonia kills a goblin with her sword and quickly cleans the blood off her blade. Lylow kills the other one.

Thoradin is outraged that the goblins killed those poor defenseless horses. She wants to bury them, and she takes hold of her combat shovel! She wants to use this deadly implement of war to dig holes. Guy thinks this is a bad idea - there's no time for this. Thoradin agrees and says a short prayer over the dead beats.

Lylow is impressed that Desi uses a sword.

The group suddenly realizes that these horses belong to Gundrin and Sildar, the people who hired them!

The game is running pretty smoothly so far. The things that tripped them up are the usual suspects: Cover (which I can never remember or find) and knowing your spell DC and your spell attack bonuses.

Genevieve keeps switching the deity she worships. Now it's Sylvanus.

The group decides to look in the cart their oxen ha been pulling. In it is flour, pork, kegs of ale, shovels (not combat shovels), 5 lanterns, stuff like that. It's about 100 gp worth of goods.

After searching the area near the dead horses, the group finds a hidden trail. They heal up and follow it. Thoradin does not hack through the brush - he gently pushes it aside. Thoradin is a friend of nature, you see.

Thoradin wants to climb a tree and scope out the area. She observes that Lylow's tiny little halfling legs are practically useless.

Thoradin gets stuck halfway up. Lylow climbs right past him and high fives him on the way up and again on the way down. He's a pleasant little fellow.

He scopes out the trail ahead. No sign of goblins.

No, maybe not. Guy climbs a tree.. rolls bad.. he falls and takes 5 damage. He's hurt bad. The group is very unsettled by this. Thoradin is a bit bummed to have to use his other heal spell.

When Thoradin heals people, he does it via comforting: "There, there..."

Continuing on, the group spots an odd pile of leaves. They chuck some sticks at it. Pit trap! The group avoids it.

The trail leads the adventurers to a cave. 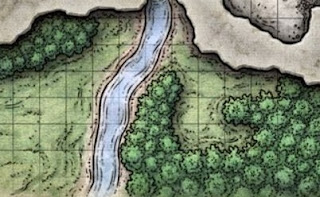 Lylow is super-confident and he says that he wants to go scout it out. He walks up through a shallow stream.. suddenly, an arrow comes shooting out of a bush!

Thoradin wants to drag the halfling to cover. Guy kills one goblin and intimidates the other, who flees.

Very good show! It's a perfect stream to watch if you're new to D&D. Anna has played a lot, so that is probably what has helped her avoid a lot of the common little mistakes new DMs make.

The biggest thing I've seen new DMs struggle with is pacing. When do you end a scene? When do you hand-wave time and travel? Every DM handles it a bit differently, so it can be a big stumbling block in the beginning that can lead to boring sessions if you are not careful. Anna avoided this for the most part.

The players are pretty fun to watch. I think that Genevieve is hilarious and she has a very good attitude when it comes to D&D. She seems like she is fun to spend time with, which is really valuable in tabletop RPGs.

Trump is the most likeable dude on the planet. I don't know why, he just is.

Good show! I am very interested to see how the group fares in the goblin caves!
Posted by Sean at 5:15 PM