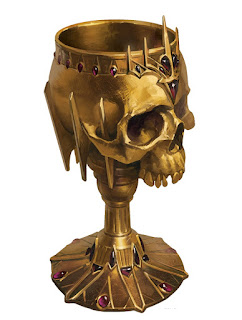 This episode actually starts with the old Curse of Strahd intro. The group is more than a little perturbed by this.

PREVIOUSLY: Way back when, Paultin rescued Evelyn's spirit after she sacrificed herself to save Strix and Diath. Paultin and Evelyn were hurled into a dark plane. A stick creature (the Raven Queen!) gave him a severed hand of hell.

The Raven Queen told Paultin that the hand would help him find a chalice - the skull chalice of Chigakare. That's an item from Tomb of Annihilation on page 189.

Paultin has a geas, placed on him by Shemeshka. He is magically bound to go on a quest to find Mr Fox, get his spectacles and obtain the X the Mystic book.

Last week, a simulacrum of Paultin messed with the group and then melted itself with the actual sunsword.

Diath's geas prevented him from going after Paultin. Strix casts remove curse, ending the geas! Huh. I didn't realize you could do that. It's right there in the description, though.

They come upon some crypts. Evelyn senses that there is a horde of undead here. Balls of light..! Will o wisps!

So this is weird. They're sort of minotaur/will o wisps. Minotaur spirits. Evelyn attacks the undead with treebane. She rolls two natural 20's, which is most un-Wafflelike.

The group keeps rolling well. Diath with a natural 20! The wisps have been defeated.
The heroes spot Simon running into a crypt an they follow. In it is a rotten black mummy... deteriorated... The mummy is missing one of its hands. So..! This is where Handrew came from?

We cut from the group to wherever Paultin is. He's in a forest with twisted trees. He has found the skull chalice of chigakare, which the Raven Queen wanted him to obtain.

Paultin comes upon a carriage pulled by Meathook, an ogre zombie. It's waiting there. A dude is nearby, peeing on a tree. It's a dusk elf dressed in Victorian garb. His clothes haven't been mended in a long time.
A female voice in the carriage says "This is taking too long!" Her name is Marisiano.

So I can't tell if these dusk elves are shadar kai. It's funny, I never really thought about it, but they're extremely similar to each other. Shadar kai have more tattoos and piercings.

Paultin makes friends with them. He rides in the carriage with them. They pass by "leering buffalo", which might be catoblepases. Lavardo explains that Paultin is in the Shadowfell.

Back in Omu, the group is checking out the body of Ch'g'kare. They notice something else in here - a portal! Diath goes through. Everyone goes through.Waffles comes through the portal, too.

In the carriage, the ring of winter tells Paultin that it believes they were meant to be together in this place.
The road splits. Perched atop a hill is a snow-covered, dilapidated tavern. There's a lot of twig glyphs, protective wards and old crow cages hanging from the building.

Oh.. we learn that Marisiana has a bag of carved-off faces. And knives...

She pulls out a silver teardrop earring. A real teardrop frozen on the end of a hook. A gift from a grandmother to a grand daughter.

Meanwhile, Simon leads the waffle crew through the Shadowfell, hopefully toward Paultin. They begin to feel despair. The characters gain flaws imposed on them by the dark realm.
Up ahead is a dude with a sack on his head riding a horse. He has a longsword. His name is Lord Nihil. The waffle crew makes a new friend!

Lord Nihil asks the adventurers, "Have you seen a coach pulled by an undead ogre? They attacked my estate?" He pulls the sack off.. his face has been shorn off.

Waffles is suffering from despair. She can't tell what's real! She attacks Miranda. Chris is making his weekly Miranda assassination attempt but she just won't die. It would be funny for him to up the stakes every week, making it more ridiculous/obvious. Like... a house falls on her. Make a Dex save.

To curb the owlbear's aggression, Strix turns Waffles into a baby chick.

At the bar, Paultin asks about the faces. The shadar kai want Paultin's face. They have a drinking contest. If Paultin loses, they get to cut off his face. This is like.. lose-lose.

Paultin loses. He wakes up later in  room in the inn. He feels his face. It's still there. He checks the mirror... yep, he still has his face. He comes downstairs. The dusk elves are drunk. They stop cavorting and laugh. They were just kidding! He can keep his face.

Then they tell him they want to help kill Paultin's friends...

The Shadowfell! Pretty cool. These face-cutting villains are apparently from the upcoming Tome of Foes.

This party split/conflict is really weird, but it's fun to watch because I have absolutely no idea what is going to happen.

We talked with Holly about this episode right here:

At the top of the page you say "Paultin has a geas, placed on him by Shemeshka. He is magically bound to go on a quest to find Mr Fox, get his spectacles and obtain the X the Mystic book." but wasn't it Diath who had the geas placed on him?