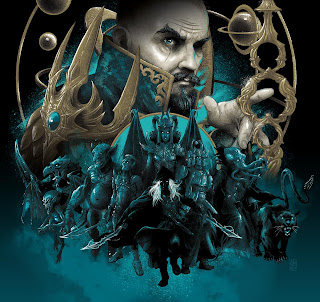 New issue of Dragon+! The last one was a bit skimpy. This one is loaded with stuff.

You can check this issue out right here.

We start things off with an interview with Vance Kelly, the guy who did the alternate cover.

This article starts out listing basic info about the book. Then it gives us some art and previews! 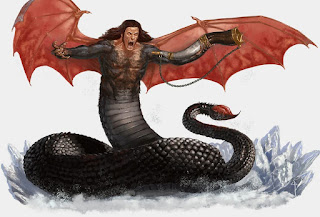 Stuff we learn:
Marut: The marut is a weird, powerful monster that originally looked sort of like an elephant-person. They have completely changed what it looks like: 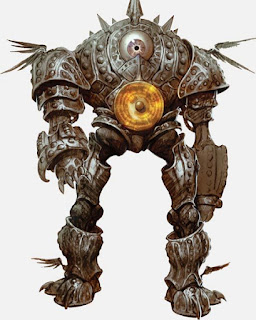 I think that looks really cool. In previous editions, I actually went out of my way not to use them because I didn't like the way they looked. This new marut looks awesome, if a bit modron-y. But then, there might be a reason for that.

We learn that they have a contract written in arcane light stamped on their chest. Awesome! 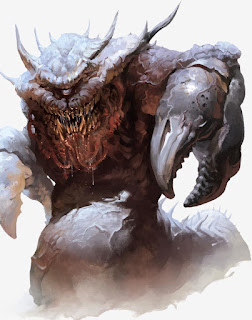 Holy crap! The monster from the 1e and 4e Manual of the Planes covers. I think this is a monster that is almost never used, though maybe that will changed now. I used it once in 4e and the players crapped their pants.

It emits a cone of anti-magic that negates magical effects in its area.

We get a reprint of one of those stories from old Dragon Magazines where famous wizards meet each other. This one involvesElminster and Mordenkainen. The author is hiding in a suit of armor watching this event.

Fun fact: I had my Al Qadim group find that guy (he was D&D author Roger Moore in my campaign) hiding in a suit of armor. He ended up becoming a zombie.

Then they reprint the 4e reprint of the classic Nine Hells article by Ed Greenwood!

We get a 5e conversion of the havoc orb from Dragon 363. This thing is really awesome.

Rancor: A short story about a character from Baldur's Gate named Dorn il-Khan. They even whipped up a 5th edition character sheet for him. They are sparing no expense in this issue.

Doing it for the Fans:  Details on Neverwinter Nights: Enhanced Edition.

Check out the art for the Neverwinter MMO Omu expansio. It features Fenthaza and Acererak. 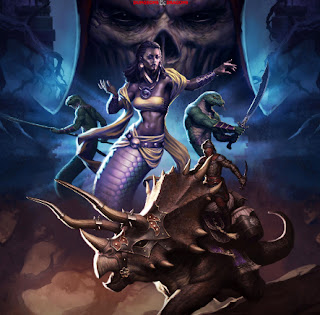 Neverwinter Goes TRPG: They turned one of their quests into a 5e module! Crypts of Kelemvor! It's 15 pages. Man, this issue is loaded with stuff.

The Gribbits Detective Agency: This is another 5e adventure linked to the Dragon Friends D&D show.

Dragonfire: Dragonfire is a deck-building game. You can download a free Dragonfire scenario.

DMs Guild Spotlight: You can get one of the guild adept adventures for free. The Risen Mists. It's gigantic! Hopefully I'll be able to run it soon.

Port Nyanzaru: Jason Thompson makes a detailed map of Port Nyanzaru. This map kicks so much ass. Here's a piece: 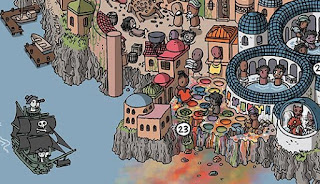 Behind the Screen: Lessons from Live Play: An article about how livestreams are influencing players and creating new fans. Apparently half of all new D&D players got into it through livestreams.

Map of the Month: More free maps from Tomb of Annihilation and Out of the Abyss!

This issue is overloaded with 5e content! Absolutely tremendous. Come for the Tome of Foes preview, stay for the havoc orb!

So the Marut was the time guardian Chris had used in episode 69 of Dice, Camera, Action! Very cool.