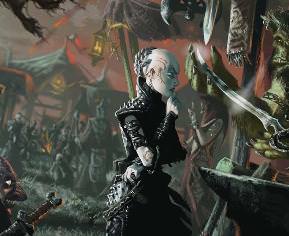 Episode 84: Domain Event
This is it! The crew vs. Paultin. Chris himself said he had no idea what would happen.

The group is in the Shadowfell. They're in the middle of a big battle against their friend Paultin, who has been turned evil by the ring of winter. Last session, Strix vanished (she went on an adventure with the Acquisitions Inc. C Team). Mr. Shambleface, the doll containing the spirit of Strahd, was taken off of Strix before she vanished.

So, here we go. Miranda is surrounded by ice Paultins. She ends up on the roof of the tavern. There's a hole in the roof. Peering through it, he can see the innkeeper's quarters.

Diath does a moonsault and throws down oil in Evelyn's path. Evelyn holds her burning sword above the oil. If she light it, the tavern will be ablaze.

She tries to enter the inn, but a soft unseen force keeps her out. We later learn that the weird twig glyphs on the tavern block non-evil creatures from entering.

Evelyn spots Paultin in the dark room. His eyes are glowing blue. Evelyn says to him, "If you care anything for us and me... take the ring off right now.

The ring tell Paultin, "Don't listen to her! They left you alone in Castle Ravenloft! Same with the fire giant citadel!"

Paultin casts freezing sphere, which has a 60 foot radius. It explodes fills the tavern, explodes through the walls, and rockets up every crack. Everybody (except Strix) must make a constitution save. Jared rolls a natural 20! Lots of 20's lately for the crew.

10d6 damage. 18 cold damage for those who made their save.

Evelyn says that Paultin is truly gone. She lights the oil and the tavern catches fire. 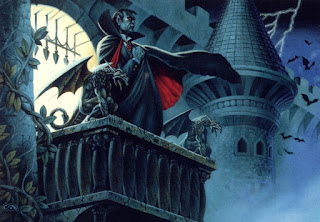 Miranda wild shapes into a giant vulture. She perches herself on a weathervane.

Izek smashes through some of the ice Paultins. Lord Nihil is not doing so well.

Eventually we get to a point where Evelyn has Simon, and she's trying to get through to Paultin, who's still holed up in the tavern.

Paultin tells her to put Simon down. Evelyn shakes her head sadly and backs away. Chris finds this very funny.

Paultin casts crown of madness on Izek. He's not an ally, so he doesn't get the bonus to his save from Evelyn's aura. Izek turns his hateful gaze upon Evelyn.

Diath looks at Paultin and says, "All I want is for you to see how lucky you are."

Paultin says he doesn't see what luck has to do with this.

The ground turns into a mouth. Strix crawls through! With her is a stone statue - a petrified dwarf.

Strix uses a stop watch that Omin gave her. It stops time! She pulls out her iron scissors. She must make an Arcana check.

Time stops... for everyone but Miranda. She sees the falling snow hang in the air. The wind is absent. The weathervane freezes in place. She sees Diath, Izek, Evelyn, Simon, Lord Nihil, and the Paultins all frozen.

Everything is perfectly still except for her. She drops into the tavern. She look at Strix and Paultin, both frozen.

Miranda slides the ring off of Paultin's finger.

Then she spots the two shadar kai.. they step through the doorway. They are unaffected by the time stop as well.

Miranda wants to make a deal with them. She ant to give them two magic items in exchange for them letting her leave with the ring of winter.

They don't want items. They want her face. She thinks and goes "OK... you can have it."

Time kicks in. From Strix's perspective, the clock didn't work.

Paultin... the cold in his veins fades. He comes to his senses. All of the Paultin statues are immobile. Some fall over.

An invisible hand throws Holly out of the tavern into the snow.

The time stop ceases. Miranda and the shadar kai are nowhere to be found. They have the ring of winter and the Strahd doll.

Evelyn attacks Izek, who is still under the effect of the crown of madness. She wants to knock him out. Jared quietly points out that "Izek is my Boss fight."

Paultin is sitting in a frost-covered chair with a thousand-yard stare. He asks, "Why is it so cold?"

Only evil can enter the tavern.... Strix could go in because she had the Strahd puppet on her.

Paultin leaves the tavern. Evelyn looks closely at his eyes. She touches his hair (which is now long and black) and says it looks good. He blow right by her, drinks some wine and smashes it an ice Paultin.

Evelyn sighs. She is resigned and disappointed.

Strix tries to remove the wards from the tavern... looks like she can't affect them.

Strix fireballs the building. Four fireballs! That did it. The tavern is a steaming pile of burned timbers. The spell upon it is destroyed. She tears the glyphs apart.

She digs up the dwarf statue. Its arm is broken off. She thinks a mending spell could fix it.

They start looking for Miranda. Evelyn is wondering if Miranda was real at all.

Paultin takes off the death curse ring and throws it to Diath. He casts locate creature to see if Miranda is nearby. She is not.

Strix says, "I was going to cut your finger off, but I didn't because you are my friend." She explained that her stopwatch stopped time. Apparently it didn't affect elves.

Paultin says that the group needs to get the ring back and that it should be destroyed.

They spot three sets of foot prints. Looks like Miranda and the shadar kai got in the wagon and left.

Meanwhile, Miranda is sitting in the coach with the shadar kai. The ring is telling her of the great wonders it has seen. It is trying to win her over.

She still has her face. It turns out that the shadar kai were joking again about face-cutting. Lavardo is drinking dwarven ale.

Miranda uses a cord to tie the ring around her neck. The shadar kai tell her not to let the waffle crew get the ring.

She feels like the ring is safe in her hands. The shadar kai seem to agree.

Chris says he has a funny feeling we'll see Miranda again. The group applauds Rachel for lasting so long.

Chris says he had no idea how this would play out.

Fun show! I really don't get why the group is so lenient with Paultin. They told him from the beginning that he shouldn't put on the ring of winter, but he did it anyway and look what happened. The dude doesn't even say he's sorry!

This is a campaign that is very character-driven. The players have become very into their characters, and things get pretty emotional. I think that's the unique appeal of this campaign. It has presented a style of play that a lot of people want to take part in.

Chris has been able to adapt to their "sub-optimal" (character-focused) style of play, and it's a beautiful thing. He's loose enough to go along for the ride when the characters take the game in unexpected directions.

I think that's a very valuable example to put out there, especially for newer DMs. They can see how you can handle the unpredictable thing players do, and that it can make the game much better if you go ahead and roll with it. It's scary at first, but it can be done.

As usual, I am very curious to see what happens next.
Posted by Sean at 9:27 PM