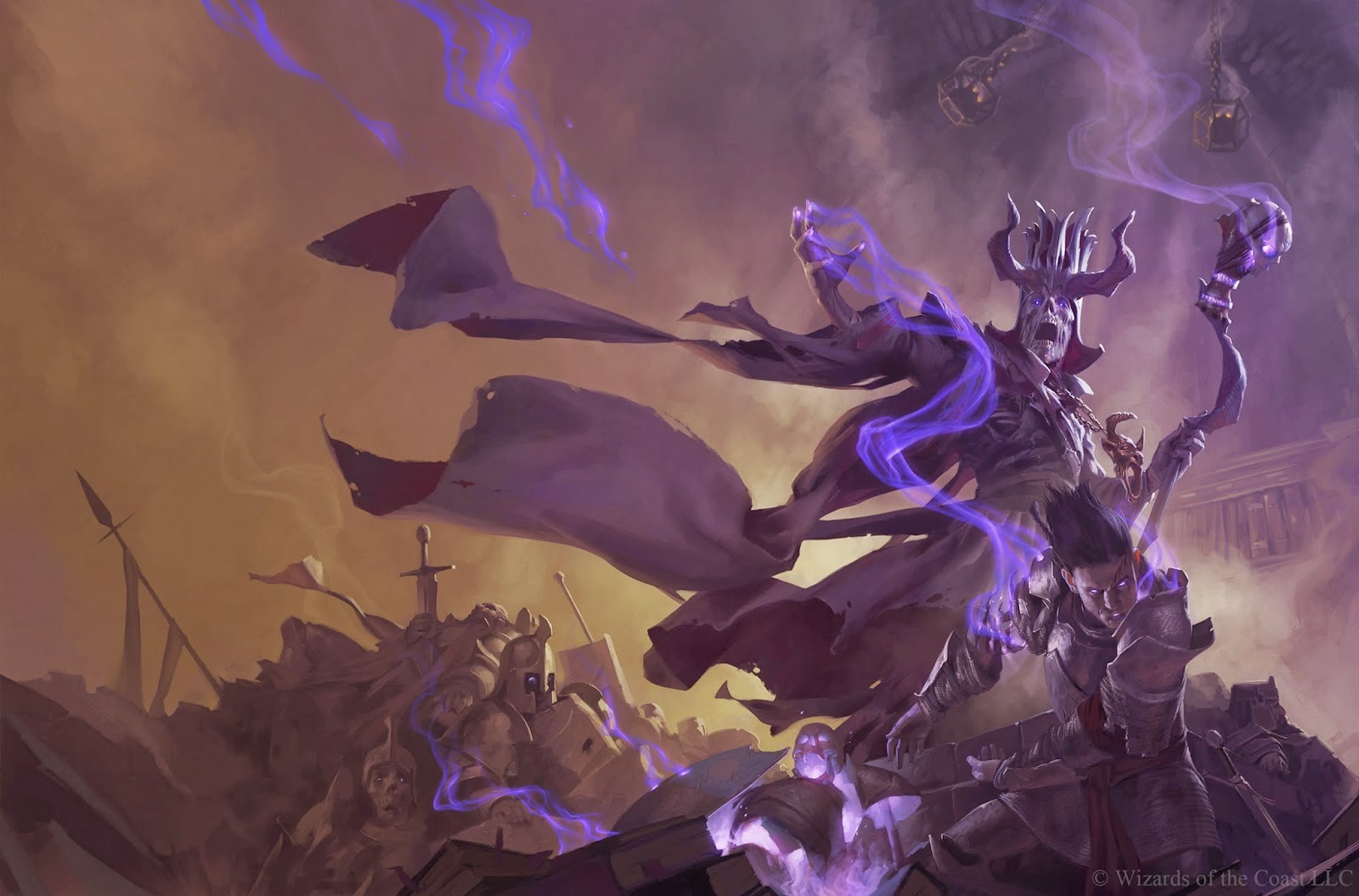 The Dungeons & Dragons 5th edition Dungeon Master's Guide is here, and now we officially have a full set of books to go ahead and run a 5th edition campaign. 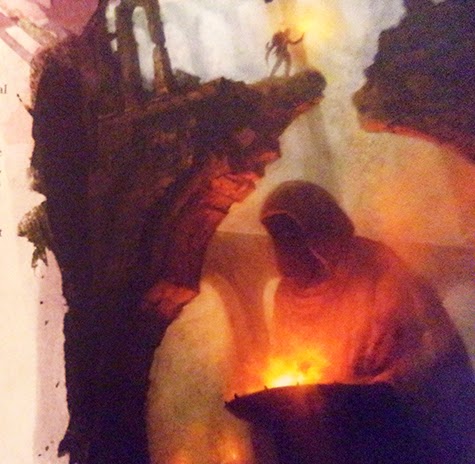 I am going to go through the book and discuss the best and worst parts. I will have to take pictures of the stuff I want to show you, so please forgive the awkward blurs and tilti-ness. 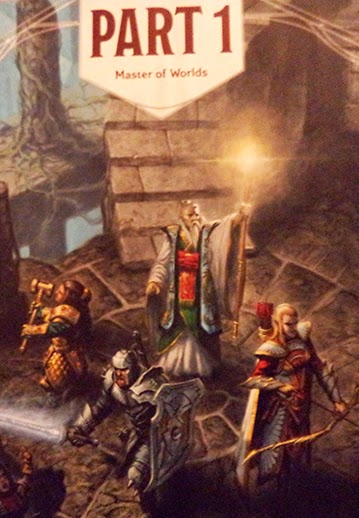 As you might be aware, I am very picky about art. In this book, they continue to do that page rip thing with the art, so it sort of looks like the image is tearing through the page or something. But this time, there's red smears and some ink stains to jazz it up a little. It looks better than in the other books, but I still don't like it. I also don't like all of the elaborate border stuff they do that overlaps the full page art.

I am also starting to think that map artist Mike Schley might actually be the best artist of this edition. I tried to track down the art from this book online, but I couldn't find much. So I'm afraid that you'll have to settle for photos for the most part.

Chapter 1: A World of Your Own

"As a referee, the DM acts as a mediator between the rules and the players. A player tells the DM what he or she wants to do, and the DM determines whether it is successful or not, in some cases asking the player to make a die roll to determine success." 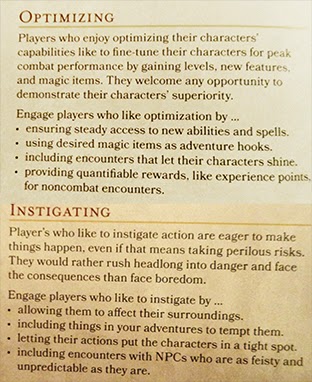 There's also the ever-popular section that identifies different player types. This time around, we've got classics like "The Actor" and "Hack and Slash Guy". But there's some new ones, which I've pictured here. The Instigator! The Optimizer! I find these vastly amusing.

There's a discussion about Gods. There's a great chart of the "prime" gods used in 4th edition, now known as the "Dawn War Deities". The list includes The Raven Queen, Tiamat, Vecna and Corellon. It even notes the real-life literary sources of these gods. Only three were created from scratch: Ioun, Melora and Torog. 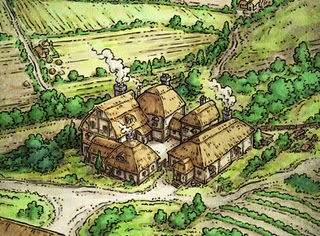 There's a fantastic section on settlements. It suggests what scale to use when creating maps, and then goes into what the difference between villages and towns are. I loved this stuff from the 3rd edition book and am happy to see it here. A village holds up to 1,000 people, a town goes up to 6,000.

There's a list of different types of governments. I get a kick out of the "kleptocracy" - a kingdom run by thieves guilds. What an awesome idea.

Then we get into building a campaign. There is a very cool note about "false action" - having a combat for the sake of a combat. The book advises against this. That's interesting, because aren't most adventures and dungeons full of unnecessary combats and encounters? I see what they are saying, but dungeons could be boiled down to a hallway and a room if you were trying to avoid false action. 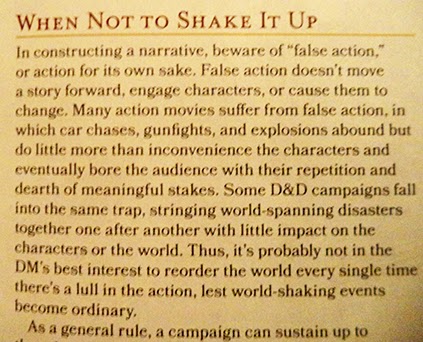 There are a few pages of awesome ideas for you to draw on for your campaign. There's lists of different types of scenarios, everything from extinction (magic fades, or unicorns dying out) to cataclysmic disasters (Rain of fire/meteors or divine judgment - awesome). 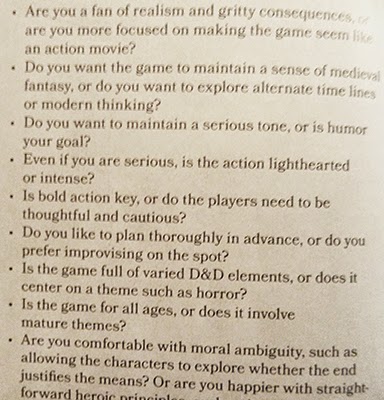 There is talk about the two main types of play: Hack and Slash and Immersive Roleplaying. Most groups are somewhere in between. It asks a lot of great questions to get you thinking about what kind of game you want to run.

I really like the question: "Is bold action key, or do the players need to be thoughtful and cautious?"

There's been a lot of games derailed by this. My groups growing up went by "the stupid rule". As in, if you do something stupid, let the dice fall where they may. The problem there is that what one person sees as "stupid" is not always the same. So, as DM, I would issue a very clear warning when someone was taking on a course of action that would likely lead to death. I would give them a chance to change their mind. This avoids a lot of drama if things go wrong. 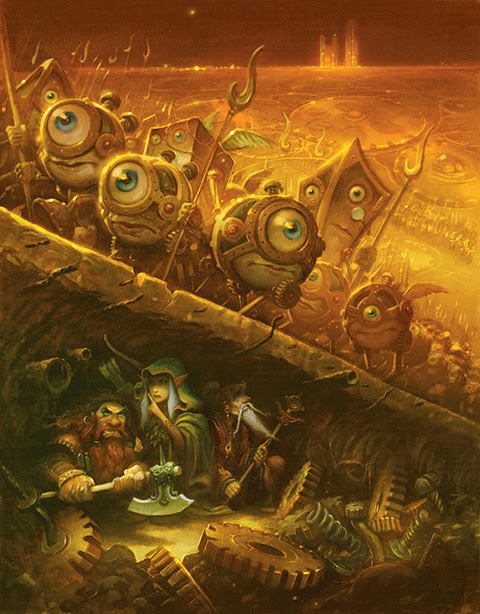 We kick this one off with a great full page depiction of adventurers hiding from a horde of marching modrons. I love all of the references to books and D&D lore. 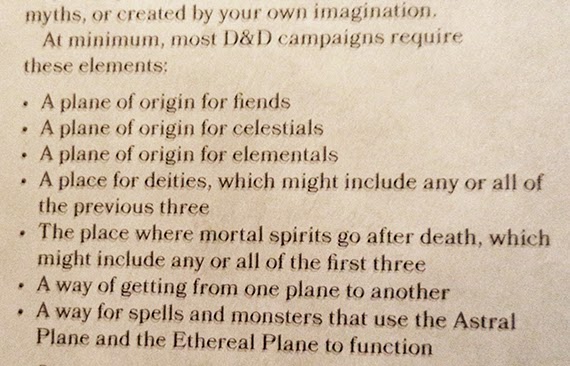 There's a handy guideline for DMs who want to make their own cosmology with a fantastic "bare minimum" list.

There's some talk of inventing your own planes. Someone should do a contest or something where people submit new planes.

We get inspired and concise discussion of most of the planes out there. The astral plane is described as primarily the home of the githyanki. The ethereal plane, a place I often confused with the astral plane when I was younger, is given a nice description as a fog that overlaps the prime material plane. 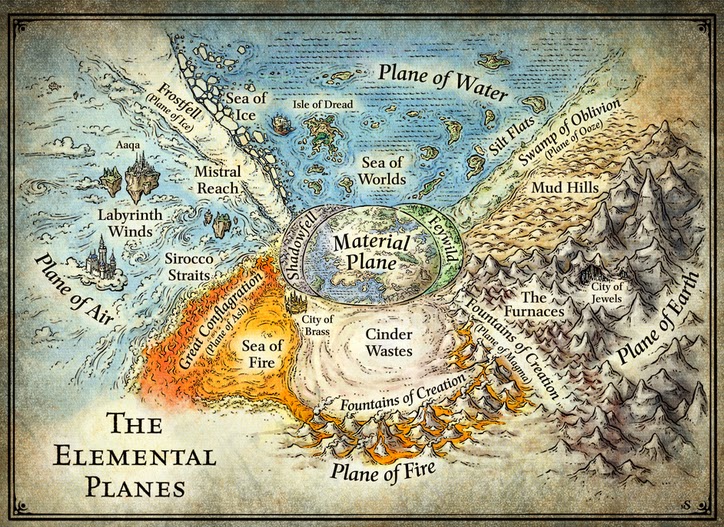 The Feywild and Shadowfell are perhaps two of the most significant contributions to D&D lore from 4th edition. There's a great chart describing how time works differently in the Feywild. If the PCs are in the Feywild for a day or more and then go home, it is possible that they return home days, weeks or years later!

We get a nice little rundown of all the planes. The section on The Abyss seemed a little bare bones.

We of course are on our way to a full Hell scholarship here at Power Score, so you'll be delighted to see a full section on each of the nine levels of hell. Not too many changes or surprises. I note there is a separate section elsewhere for an entirely different realm known as "Hades". There is almost no description of it at all... odd.

Part One is awesome. I already love this book. Click here to continue to part 2.
Posted by Sean at 12:28 PM

Melora, Ioun and Torog were all present in 4th edition...

Anon: What I meant was that Melora, Ioun and Torog were made up by the designers when they were created. They have no literary origins from real life myth and legend.