Hoard of the Dragon Queen - Glazhael the Cloudchaser 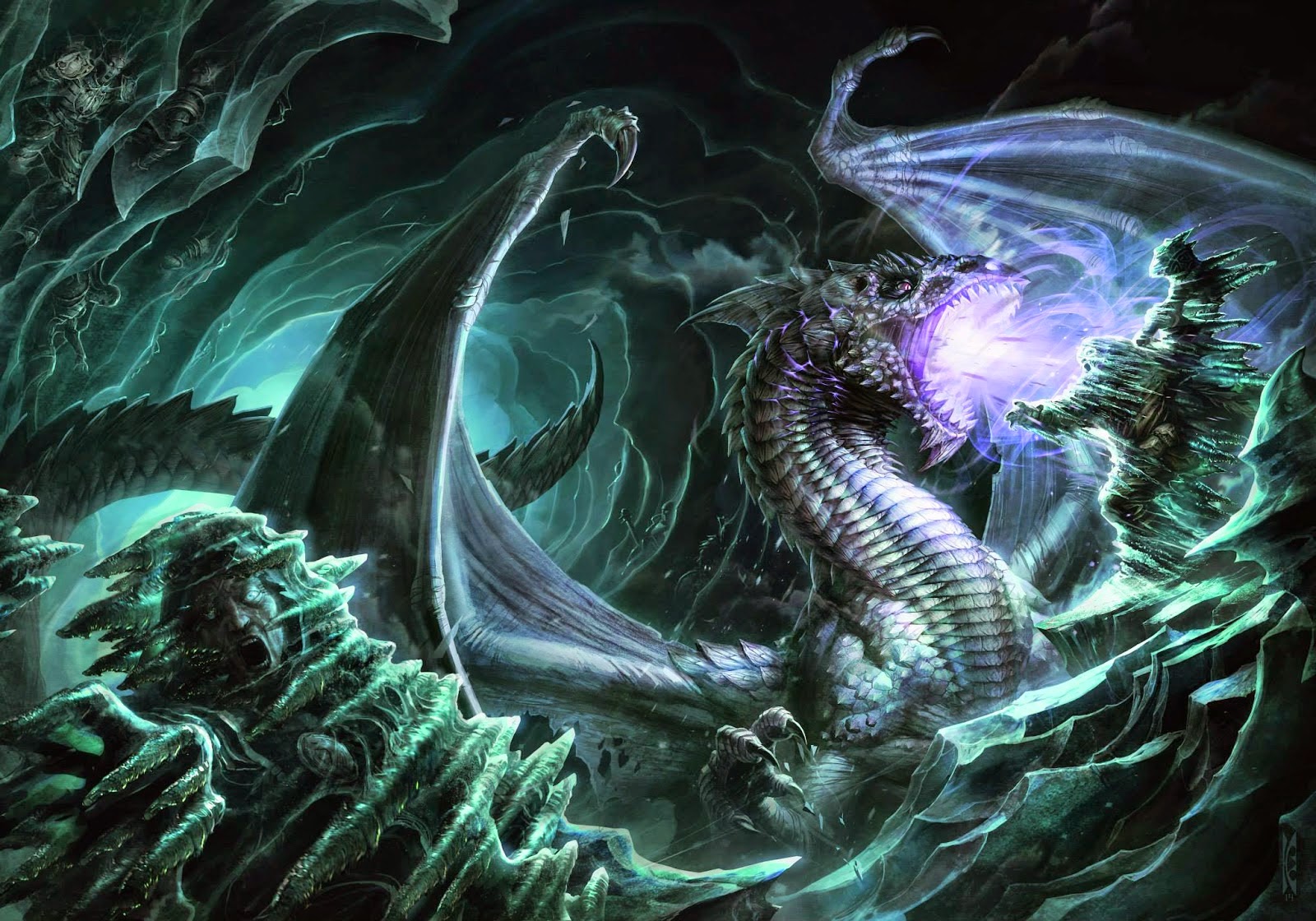 We've been playing Hoard of the Dragon Queen on Sundays, because we usually play on Wednesday but Christmas Eve and New Year's Eve both fall on that day this year. We only have until March 11 to get all of Rise of Tiamat done. Time is of the essence!

The heroes began exploring Skyreach Castle last session. This is the location of the final episode of Hoard, a flying ice castle that is home to a wide assortment of bad guys. As fate would have it, this week their exploration took them directly to two of the major villains of the adventure - the vampire and the white dragon.

The adventurers came upon another tower, partly crumbled. The only working entrance to the interior was on a balcony 75 feet up. Dark the Dragon Sorceress loves casting spider climb and used it to get the party up there.

On the other side of the door is a single room containing a coffin guarded by two vampire spawn. This is the lair of Sandesyl, a vampire complete with legendary actions.

A huge fight broke out. Dark, played by a 4th grader, wanted to be a vampire really badly. It was very amusing. We also have a running joke that the party's gnome thief lives in garbage. I'm not sure how it started. But Dark's player did a hilarious cute-sy drawing of him in her notebook (which is full of drawings). He was a trash can with a smiley face.

The vampires are very deadly, and this was the toughest fight in a while. Basically, the vampire can grab you and drink your blood, dealing 7 regular damage and 10 necrotic. The necrotic also lowers your maximum hit points (!) until you take a long rest. Worse, Sandesyl can use 2 legendary actions to bite again at the end of a PC's turn!

Two characters were hurt very badly. The heroes defeated the vampires and needed a rest. It turns out that this tower is a pretty great place to rest in Skyreach Castle, because it's very inaccessible.

During the rest, I could have had enemy NPCs mobilize and go on patrol, alerted to the PCs' presence (the heroes had left the red wizard Azbara Jos alive, locked in a room). But I did this in the hunting lodge and it actually made that episode less fun to play, so I decided to make this place more "static" (aka rooms full of monsters that don't move around the dungeon) and see how that went. It went fine.

Fully rested, our heroes descended the tower and decided to investigate the ice tunnels. These tunnels all lead to the monster on the cover of the module, the white dragon: Glazhael the Cloudchaser! 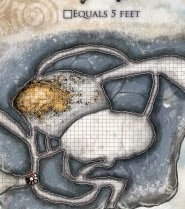 I made a simple, massive map using a blank poster map grid and a bunch of dungeon tiles, just a giant room split in half. The tiles represented the "ledge" that was 30 feet higher than the section of the cave where the treasure was. The PCs emerged on this ledge. The treasure below was covered in a thin sheet of ice. They could spot magic items - bracers, a sword, armor, piles of gold. They were excited, as magic items are very hard to come by in this adventure.

The dragon is hanging upside down on the ceiling as the heroes enter. The heroes tried to talk with the dragon. The dragon has strong feelings about food. If you have food for him, you're a friend. If you don't, you're an enemy. The PCs picked up on this and tried to give him rations, but rations aren't going to cut it! 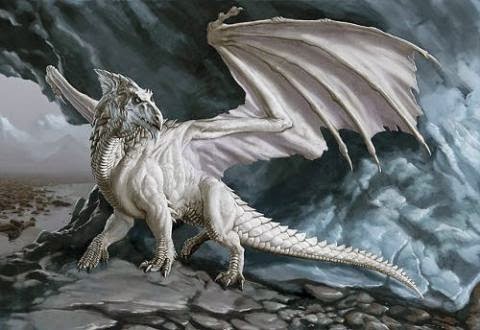 Glazhael let out his frightful presence power. Every single PC failed their saving throw! That means none of them could come closer to him, and they all had disadvantage on attack rolls and saving throws! The PCs get to save again at the end of each of their turns, but they kept rolling really low on their saving throws.

We rolled initiative, and the dragon went third. The dragon breathed ice on half of the party, doing 54 damage! A few PCs went down. On the character's turns, they couldn't do much because they couldn't get close to the dragon due to being frightened. It was actually looking like a TPK.

On the dragon's next turn, it landed in front of a few PCs and dropped one PC with a claw/claw bite, and then used it's legendary actions to drop another PC with tail attacks, each doing 15 damage.

There was a point where only one PC was standing - the gnome thief.

A party thief actually failed his death saves and died. This is the first time that this has happened in this encounters game. I had given the PCs each a tear of bahamut a few sessions back, which could bring him back to life. Someone used their tear to bring the dead thief back to life with one hit point.

Somehow the heroes rallied (I was wondering if I needed to fudge some rolls, but it turned out I didn't). The paladin probably saved the entire party with a spell he'd never cast before - aid. Aid healed three dying PCs and brought them back up. Suddenly, the entire party was standing. The hero who wielded Hazirawn, the evil magic sword, tore into Glazhael with a series of attacks. He rolled a natural 20 on one of them and killed the dragon! 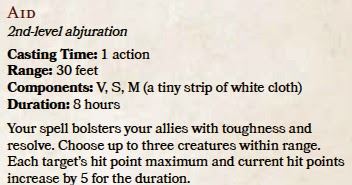 The players were very happy as they split up the loot. We talked about how this was one of the toughest fights they've been in (as it should be, IMO). They immediately brought up the last fight that felt this hard. I wracked my brain trying to think of the last deadly fight. I don't pay attention to that kind of thing, so I couldn't guess. They said it was... the stirges. The stirges in episode 2! I was very amused. I hate stirges, but that was a cool encounter, with the stirges and the bats flying all around. Who would guess that the two toughest fights the party would ever have would be against a dragon and a bunch of stirges?

Going in to this, I was very concerned that the dragon fight would either be too hard or too easy. I decided to just run it as written and see what happened. It turns out that it was absolutely perfectly balanced. It was exactly how a "boss fight" should be.

Next week, we will start The Rise of Tiamat!

I've prepared the first few chapters, and updated my Guide to Tyranny of Dragons accordingly.
Posted by Sean at 7:31 AM

You only said Jos is alive. What happened to Rath?

Unknown: Rath was able to flee through the vanishing wall. He pops up again in Rise of Tiamat.

What happened to the flying castle and what did the party do with it? Did it crash or did they take possession of it?

Loved this series - has really helped me in running it for my group. They enter Parnast this week!

Anonymous: They let Blagothkus keep the castle. It seems like every group did something different with it. Thanks! Good luck with Parnast.