I got to the store a little early tonight for our next session of Hoard of the Dragon Queen. I had a chance to talk with the owner, and he told me that he is stunned at how well the Dungeon Master's Guide is selling. He also noted that his distributor is out of Player's Handbooks. So I can say, at least here in New York, 5th edition is continuing to do incredibly well. The tables are full (and growing) every single week.

Unfortunately our little buddy Dark the Dragon Sorceress was sick this week. So we had five players for the exploration of Episode 7. This entire chapter can be skipped if the PCs decide to just head on down the road. This would be a problem, as they'd be a level behind when attempting to foil the villains in the final episode.

I love a lot of the weird little rules in the DMG, so I decided to experiment with one this week. I used the "lingering injuries" chart. When a PC rolled a 20, the bad guy had to roll on the chart for a horrible effect like losing an eye or getting broken ribs. The players liked it and want to keep it, even though they are aware it will effect them as well. 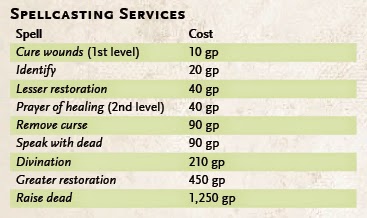 Some of the "lingering injuries" are cured with the regenerate spell. So I checked page 11 of the Adventurer's League Player's Guide and discovered that regenerate is not on the list of spells PCs can pay to have cast. I figured I would just see what level spell regenerate was, and use the other prices to figure out what an appropriate price regenerate should be.

Get a load of this. Raise Dead is a 5th level spell. Regenerate is 7th! That's weird, right? It's harder to regrow a living arm than it is to bring someone back from the dead?! I could see players who lost an arm deciding to kill themselves and be raised because it's less expensive, but there's this quote in the raise dead spell: "This spell closes all mortal wounds, but it doesn't restore missing body parts. If the creature is lacking body parts or organs integral for its' survival - it's head, for instance - the spell automatically fails."

Looking around a bit more, I see that the reincarnate spell (also 5th level) does not have this restriction. The trade-off is that the PC is reborn as a member of a random race.

Next week we will try out Hero Points.

Scouting Out the Lodge 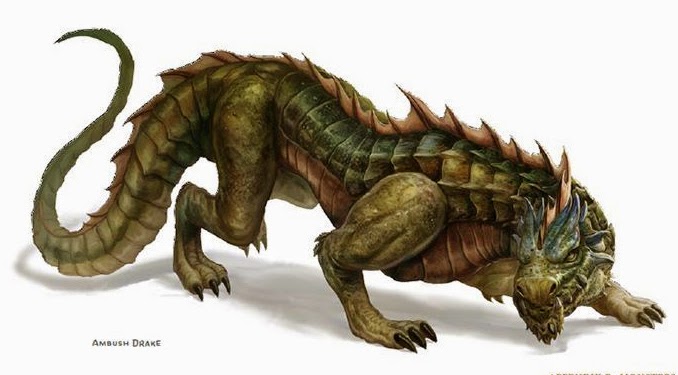 At the end of last week's session, the heroes had appeared by the lodge and were attacked by some perytons. The heroes slaughtered the perytons with critical hits. This week, they headed into the forest and rested in a cave behind a waterfall (I placed it in the forest so the PCs could have a safe place to rest).

Tonight was all about awkward planing and schemes. It took the PCs a long time to figure out what they wanted to do. The Lodge is home to a high-ranking cultist named Talis the White. She had wanted to be the bearer of the white dragon mask, but it went to her rival, Varram (who will be encountered in The Rise of Tiamat). Now she is in the lodge, stewing.

The heroes scoped out the place. A rogue climbed onto the roof and looted the peryton nest. He found the arrow-catching shield. Finally, the PCs are starting to get some magic items! The arrow-catching shield was a bit underwhelming, but that's just one of many items in the lodge. A note to fellow DMs - the stats of the shield in the .pdf supplement are not the same as the official DMG version of the item! The shield in the DMG is more powerful.

The heroes took so long huddled outside of the lodge arguing that I had the patrol that consisted of 2 trolls and their drakes emerge from the forest, returning from their patrol. 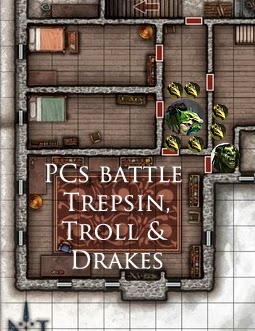 The group went through a long freak-out process that ultimately led to the heroes battling the trolls in room 11 of the lodge.

Long story short, the PCs fought a troll, 6 drakes and Trepsin the four-armed troll. The magic sword Hazirawn's wounding ability came in handy here. One troll dropped, then Trepsin took down the party paladin with his five.. yes... five attacks!

He was wearing this moss cape that protected him from fire. The group was very wary of the cape, so I "trolled" them (sorry) by continuously describing Trepsin as playing with the cape and adjusting it. Any chance I got, I would describe the cape, and some of the players were extremely alarmed by what potential dangers the cape had to offer. They correctly guessed that it protected the troll from fire. It didn't matter anyway, because the heroes were trying to throw oil and start a fire, but nobody wanted to "waste" an action to start the fire. So we just had a battle in an oil-soaked room. After killing the bad guys, the heroes fled the building and hid out in the woods. Some of them were hurt bad.

Running the Lodge in a Realistic Manner

I am always nervous about running a dungeon in a "real" way, but I tried tonight. I made an effort to play it as if it was a building full of living beings rather than a collection of static encounters that do not leave their locations. So in the case of the troll fight, I had decided that Trepsin had sent the third troll up to Talis to warn her that there were attackers in her lodge.

The heroes rested in the cave and returned to the lodge. I decided that Talis had put her two gargoyles on the roof to watch for the interlopers.

We had a lot more planning, hemming and hawing. The heroes ultimately waited until 1 AM and snuck in the back door. They made their way down into the basement and found 3 prisoners:

Brother Caemon - Priest of Amaunator.
Miresella - Woman who was traveling and stumbled on the lodge.
Craggnor - Dwarf cultist who got on Talis' bad side.

The PCs interrogated them, and freed all three. They bound the dwarf, and plan on interrogating him next time.

As the heroes fled the lodge with the prisoners, the paladin rolled a one on his stealth. The gargoyles noticed and took flight!

Next week, we'll kick off from there. It was a decent session. The group needs a leader. Dark's dad can step up and he probably should. Good game!
Posted by Sean at 8:03 AM