We had a very good night at the store this week for Hoard of the Dragon Queen. All 4 tables are full of players that show up every week. It is pretty amazing.

I made out like a bandit tonight. One of the players from my old high school gaming days gave me a bunch of stuff - a marvel superheroes boxed set and a handful of his old character sheets. He knows that I like keeping files of our old adventures, and the character sheets are a goldmine!

Just as good, the 4th grader who plays Dark the Dragon Sorceress did some drawings for me tonight. She even did one of Dark. As you can see, Dark is the most cheerful black dragon-blooded sorceress you are likely to meet in all of the Forgotten Realms.

We didn't get to play last week, as there was a snow storm. So this week I was anxious to get the group as far as possible. I am hellbent on finishing The Rise of Tiamat by March 11.

We had left off last time in Castle Naerytar, where the heroes were battling a horde of bad guys at once. Half the party was down. We resumed there, and lizardfolk began joining in to aid the heroes each round.

It was interesting. The heroes healed each other and hid as the lizardfolk battled Pharblex Splattergoo, who devastated them with Thunderwave spells.

In the end, Pharblex was slaughtered by a horde of lizardfolk and Dralmorrer fled into the dungeon.

The heroes took a short rest, while a horde of lizardfolk rampaged into the dungeon. I kind of went room by room, rolling a single d20 to see how the lizardfolk generally fared. They slaughtered their way to the lake in 6 & 7, where they had an epic battle with the giant frogs and bullywugs. They all died. 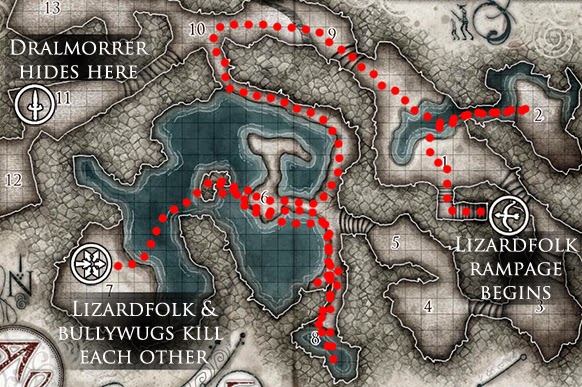 The PCs rested. The party fighter had stolen the magic sword Hazirawn from Rezmir before she fled. I read up on attunement. I had thought it took a week to attune to a weapon, but it is just one short rest. This sword is powerful! It casts spells and does an extra 2d6 damage! It is also sentient and evil, which should be interesting..

Once they rested, the heroes made their way into the dungeon and followed the trail of carnage. They eventually found Dralmorrer hiding in Room 11, protected by ten bullywugs. The heroes did their flaming oil trick, where the rogues toss oil containers and dark casts twinned firebolts, scorching a pile of bad guys.

As you are aware, I really like this group both as players and as people. I love it when they do little tricks like that. They are very into the game and pretty much every time I walk into the store they are all already there, sitting at the table and patiently waiting to get started.

I had Dralmorrer panic and flee into Pharblex's chamber Room 12). I had him try to shove the treasure chest out to the heroes to convince them to leave him be. The chest was trapped - 6 pots fell to the ground, releasing hallucinogenic gas. Dralmorrer began to hallucinate. It was very amusing.

The heroes had found the teleportation circle before battling the bullywugs. They knew they needed the password. It's in Dralmorrer's chambers way back up in the castle. I really wanted the PCs to move on to chapter 7, so I dropped some hints and they swiftly realized that Dralmorrer knew it. They easily convinced the dude to give up the command word.

Dark's dad coldly shot an arrow through his head, to the shock of the heroes. Dark's dad does not mess around! 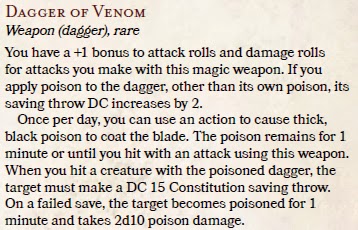 The heroes went through the portal and appeared outside the Hunting Lodge. They were attacked by the perytons that lived on the roof of the lodge, and made quick work of them with some good rolls. The guy wielding Hazirawn rolled a critical, doing massive damage. And the rogue with the dagger of venom flung it and rolled a critical as well.

Another great session! I have no idea how they'll deal with the hunting lodge. It could go quick, or it might take a few weeks. We'll see.
Posted by Sean at 7:29 AM