Hoard of the Dragon Queen - Talis the White

We finished up Episode 7 tonight. The players, mostly kids around the age of 13, were exceptionally hyper-active this evening. I assume it is because of Christmas.

Usually they are fine, but I had to tell them to be quiet quite a few times. Not a big deal, though. It was another good night of D&D.

This is a special magic item included in the DM pack, one for each PC. I decided to hand them out tonight wherever it felt like they'd fit in the story. These items have a real-life expiration date of February 2015, so I want to get these items to the PCs now so they have time to use them. The tear is a consumable that brings a character back to life, basically.

I tried using Hero Points from the DMG tonight. Basically, a PC gets 5 + their level in hero points. The points can be used to give a player an extra d6 to a roll. This felt like it made the game way, way too easy. I probably won't use them again.

Chaos at the Lodge 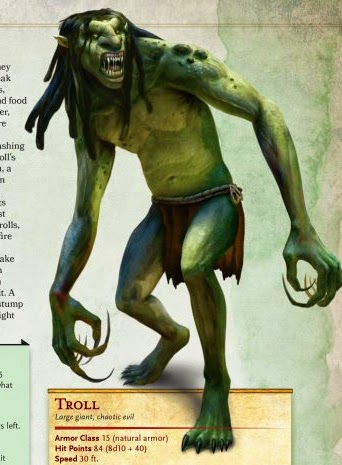 We left off last time outside the Hunting Lodge. I had decided to run this section as a "living dungeon", and in retrospect I might have been better off making it more video-gamey. The players could not focus when it was time to make a decision.

In general, I've found that in real life there aren't many players who want to step up and take a leader role in the party. It is pretty interesting.

The heroes battled two gargoyles, and ended up drawing out a troll and three drakes, too. Two of the thieves in the party like to do "team maneuvers" which usually consist of the elf throwing the gnome at a monster.

In this case, the elf overshot the troll and the gnome landed on the roof of the shed behind him. The gnome made some rolls and was able to avoid falling through the moss roof and actually jumped on and stabbed the troll.

Dark decided she wanted to get in on this too. She wanted the black dragon wyrmling, Sparky, to carry her up to the troll. I had planned to make Sparky's first time flying a big deal, so this was good timing. Sparky made a good roll, and actually was able to take flight for the first time in his life. He dropped Dark on the troll, who commenced to stabbing. Dark has a very high strength, you see.

It was also noted that our gnome has a set of bagpipes. He had bought them some time back. We were talking about where he could carry the bagpipes - his pack is undoubtedly overflowing with Trepsin's Mossy Cape as it is. 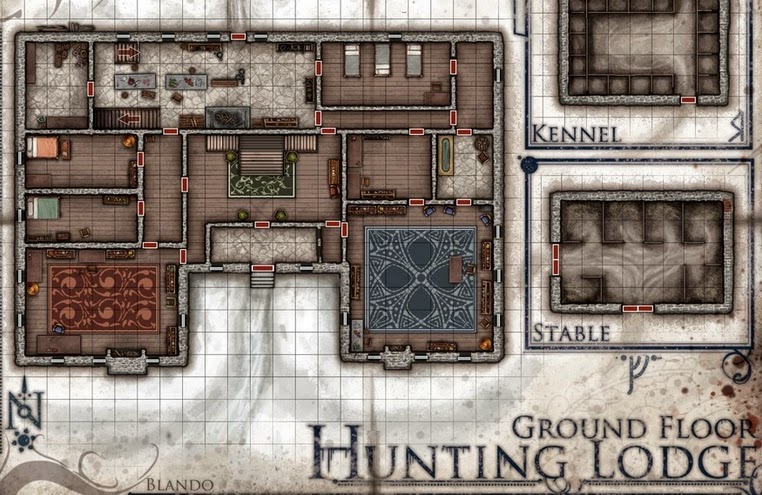 With that battle dealt with, the heroes decided to park their three freed prisoners in the shed and continue exploring. I made sure they visited the stables and learned that there were once wyverns in there.

The heroes went through the lower floor of the lodge and battled the helmed horror. It summoned Evard's black tentacles and was a decent challenge.

The evil sword Hazirawn is extremely powerful in the hands of the party fighter and I am starting to get worried it is doing too much damage. The sword did do less damage than normal against the helmed horror, due to the horror's many resistances.

There was a lot of exploring and chaos at this point. The players were having a hard time staying focused. There were simply too many doors to choose from. One of the rogues looted the banner, which may come into play in Episode 8.

They found the magic tapestry that teleports those who step into it one-way to "a random location within 5 miles". Seeing how Parnast, the town in episode 8, is five miles away, I decided that they'd just appear outside of Parnast. This would be a nice way to just get to episode 8 and be done with this lodge, which feels a lot like filler.

But what happened was that the PCs went through the tapestry, saw Parnast, and decided to walk back to the lodge. D'oh.

Eventually the adventurers headed upstairs and stumbled right in to Talis the White's room. She was there with her three guards, and wanted to cut a deal.

The story with Talis is that she is angry that she wasn't given the white dragon mask, so she wants to recruit the heroes to mess with the cult. The party eventually agreed, and she dumped a bunch of information.

The bad part to this is that Talis has some cool magic items that the party will miss out on, simply by not killing her. Talis has a "Wand of Winter" that Dark would have liked.

Basically, the cult has a flying castle controlled by a storm giant parked at Parnast. Talis swooned as she talked about the white dragon, Glazhael the Cloudchaser, who was lurking in the flying castle with Rezmir and Azbara Jos.

Our heroes geared up and headed through the tapestry again, at last ready to tackle the climactic final episode of Hoard of the Dragon Queen.
Posted by Sean at 8:08 PM

This blog is really so amazing

Can't agree more. Never thought I would be so drawn into this. I've been running HotDQ for almost a year (once or twice a month) now and this is really helpful.
WE're on Episode 6 and just about to head into the basement of the castle then onto the lodge.