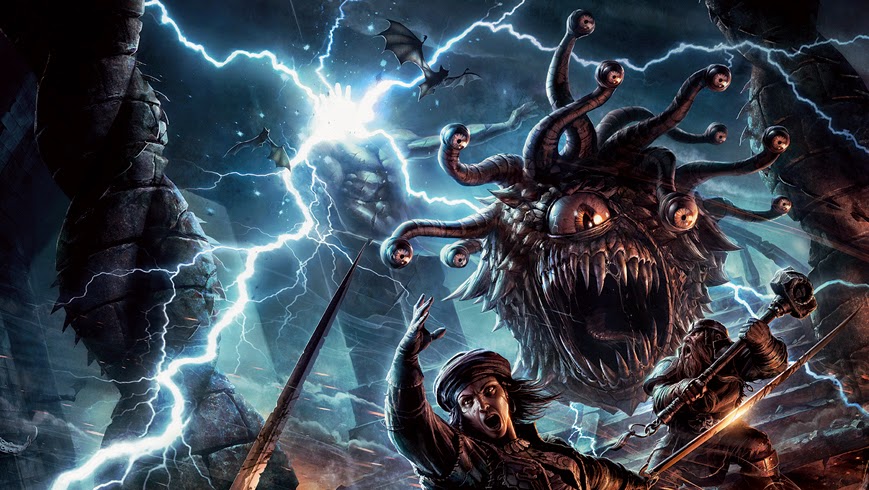 This is the second part of my look through the 5e Monster Manual. You can check out Part One here.

This will be more of me rambling about monsters and nitpicking art. Fairly warned be thee says I!

Invisible Stalker: Even when you can see invisible, you can only make out their vague outline.

Kuo-Toa: I didn't know  that they had been enslaved by mind flayers at one point. It makes sense why they are so spaced-out. They even mention their god Blibdoolpoolp and their weapon-snatching sticky shields! I've mentioned it before, but one of my favorite dungeons of all time is Bhal-Hamatugn, the kuo-tuo temple from the "Zenith Trajectory" adventure in the Dungeon Magazine Shackled City adventure path.

Lich: The art appears to be of a red wizard of thay turned into a lich. I'm just not comfortable with the Forgotten Realms being the base setting, it feels wrong to me.

There's a note about how liches must periodically feed souls to its' phylactery. The lich can trap one person's body and soul in their phylactery. After 24 hours, the person is destroyed utterly. Nothing can bring them back save divine intervention. Kind of cool, I've never heard of this kind of thing before. Definitely a useful adventure hook!

Lycanthrope: There's a big sidebar on what changes there are to a PC infected with lycanthropy.  If you become a werewolf, your strength immediately shoots up to a 15 if it's not there already. I like this.

Mind Flayer: They actually mention Qualith, the illithid braille-like language from the Illithiad! One mindflayer is a challenge for a 7th level party. Sounds about right! I really think they've done a great job with this monster manual. Each entry is full of information presented in as few words as possible.

Modrons: I am so happy these are in here. I know they might be too goofy for some, but I always really like the Planescape adventure The Great Modron March by the great Monte Cook. I really feel like Lawful creatures are under-explored in D&D, and these guys are extremely different and interesting.

Pixies: They use their pixie dust as a spell component. Makes sense.

Rust Monster: Each time a weapon hits them, it has a cumulative -1 penalty. Once the penalty reaches -5, it is destroyed. It can also create this effect with its' antennae. Players really hate these guys, so use them sparingly!

Satyr: They are defined as "stout male human with the furry bellies and cloven hooves of goats". And then later it says that they might "...sneak into a well-defined garden to gaze upon a beautiful lad or lass...". I think we are at a point where this kind of thing isn't a big deal to people. I guess we'll see.

Scarecrow: These were always too goofy for me. I mean, come on, now. A Scarecrow?! It feels like a waste of an entry.

Slaadi: I always liked these guys. In this, they are described as the enemies of modrons. Basically, Primus (lawful god of modrons) sent a law-infused stone into Limbo, thinking he could create order out of chaos. It allowed him to create pockets where his modrons could exist safely. But the chaos energy reacted to the stone, spawning the race of the Slaads. They attack modrons on sight. Primus doesn't see them as a threat. I don't know if this lore existed prior to 5e, but I really like it. It kind of sets up a Law vs Chaos thing in a DCC RPG kind of way.

Succubus/Incubus: (An Incubus is a male Succubus... though there is a vague mention that they can switch genders) Their kiss drains 32 hit points which reduce your hit point maximum until you take a full rest! Ouch. And they're a CR4 monster.

In previous editions, these creatures have been either demons or devils. In this, they are both and neither. This is probably for the best!

I like the lore on these guys. They seduce mortals and try to turn them evil. Once a mortal has committed betrayals of thought, word and deed, they have been corrupted. The succubus then kills the mortal and their soul appears in the Lower planes. I guess if the person is lawful they appear in hell, and if they are chaotic they appear in The Abyss.

I wrote a big article about the Pathfinder and D&D Succubus Lore here.

Troglodyte: They have never been able to settle on a depiction of these guys. This new one looks like a Slaad. While I wasn't blown away by the grey 4e version of them, that was better than this. 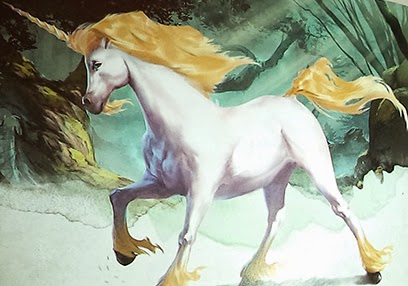 Unicorn: Wow, their golden hair is goofy. These creatures actually have lair actions..! Open flames are extinguished in their lair. Healing spells are MAXED OUT. Curses are suppressed. Wow, this is really fun stuff.

Wight: This is one of my favorite pieces of art in the book. Those killed by a wight rise as a zombie under their control.

Yuan-Ti: I like the lore here. They were once humans who worshiped Snake Gods and used magic to become more snake-like. They no longer feel many strong emotions. 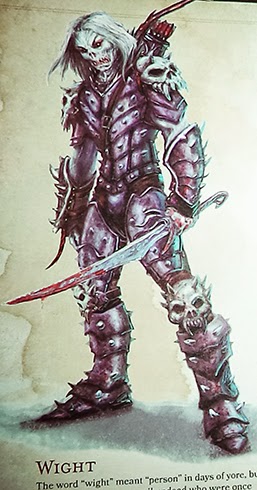 There is an appendix for monster that are animals or animal-variants, like axe-beaks and giant frogs.

There is a second appendix for NPCs like archmages, gladiators and priests.

All in all it is a great book. They fit in piles of monsters and did a fantastic job of telling the reader all sorts of fun details without burying it in walls of text.

It is interesting that they tried to put every single iconic monster in this one book. It appears that they are not trying to spread material out in a series of sourcebooks. I mean, I'm sure there will be a Monster Manual 2 of some sort some day, but this thing will definitely be enough for you to run as many campaigns as you'd like with.

The art is serviceable, most of it pretty good. There's few pieces that really stand out, either good or bad. Aesthetically it doesn't even touch the old Planescape Monstrous Compendium, which to me is the pinnacle of D&D art integrated into a monster stat book.

If you're in the mood for more monsters, please check out my other articles that go in depth on all sorts of D&D creatures:

Mind Flayers: Everything You Need To Know

Spellweavers: The Coolest Monster Nobody Uses

The Tarrasque: The Most Powerful Monster in the Game

The Most Awesome D&D Monsters By Edition
Posted by Sean at 6:21 AM