Hoard of the Dragon Queen - The Golden Stag 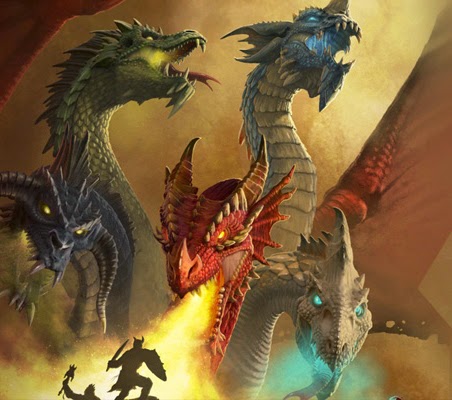 I am writing this about an hour before I leave for the store. I just finished preparing for tonight's session of episode four of Hoard of the Dragon Queen. I decided to toss in an owlbear attack in place of a weird doppelganger encounter involving "buxom" ladies which I don't think is appropriate for my group of young players.

I have amused myself greatly with this owlbear encounter. I am going to foreshadow it the previous day by having the caravan come upon a bear eating honey contentedly. I will have a member of the caravan comment that this forest is known for its' abundance of bears and nocturnal fowl. That night, an owl's hooting will bother the horses.

Then, on the next evening, the horses are bothered once more by hooting. But this time, whatever PC goes to calm them will run into an owlbear. I don't know why this tickles me so much, but it does. Hopefully I don't screw it up by forgetting a detail in the heat of the moment. 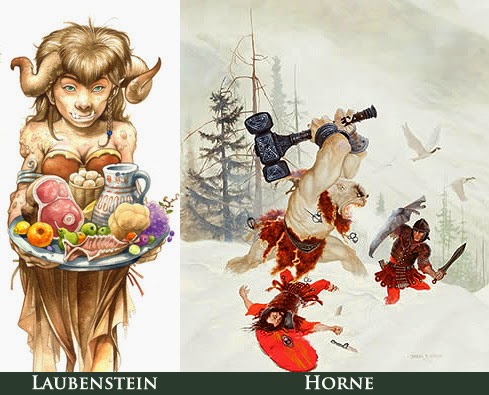 There is a kickstarter that some of you might want to check out. I've never signed up for one before, but I might try this. It's a D&D 5th edition adventure series known as The Folio. It looks pretty high quality... the thing that has me most interested is that they are using some good, overlooked artists like Daniel Horne (who did one of my favorite D&D paintings of all time) and Jeff Laubenstein (who did the original Shadowrun character archetype depictions).

The idea here is to publish short, awesome adventures, which is exactly what I like. White Plume Mountain and Intrigue in the Court of Chaos are two of my favorite adventures that I ran this year, and each of them are about 15 pages long.

If I sign up for this, I'll let you know how it goes. If this sounds like your thing, check it out here. 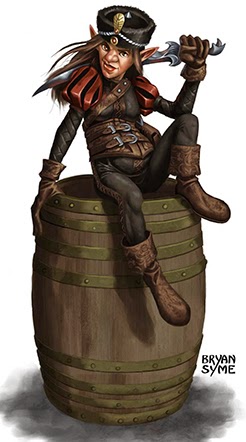 OK, I am back from the store. I had two main issues tonight. One was that my kids were getting a little too excited and loud. The other issue was that this chapter is a bit of a mess. The events are so vague that I almost didn't have enough to go on.

There's one encounter where the PCs come upon a roadside inn. What struck me was... the authors of this adventure didn't bother to name it. I mean, come on now. I guess they're cramped for space in this book, but the name of the inn is like two extra words.

But the really egregious ones are these encounters where the cultists start to suspect what our heroes are up to. What do the cultists do? Here's a quote right out of the book: "...the cultists strike first by trying to assassinate the characters in their bedrolls or perhaps by arranging an accident - a loose wheel, broken axle, or spooked lead horse may be an effective way to solve the problem."

This is where I totally agree with Bryce Lynch. I am paying for this module for a complete scenario, not random suggestions! This is the climax of the whole episode? "A broken axle or something" does not cut it! Give me an encounter, not homework!

My little buddy, the 4th grade girl who plays Dark the Dragon Sorceress, insists on sitting next to me every week. Almost every session she has a cool drawing of her character to show me. This week was a picture of Dark fighting a peryton (from last week) in the sky. It was awesome! 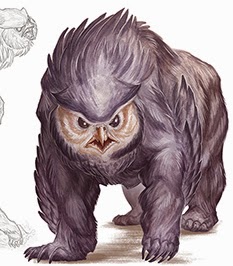 I kicked this session off with the owlbear. Like I said, I always try to get a combat in early to get everybody focused. This went very well. The party gnome has a pet bird that he talks to. He sent it to scout out what the problem with the horses was. Smart! These kids loved the owlbear and the mini.

This is a weird encounter where the caravan spots a golden stag and goes off to hunt it. The adventure gives the DM a number of ways to play it. I had the heroes track it, then the stag gives a cryptic speech and hands out a +1 longbow. I was happy to see that the longbow +1 has a certificate! I can't believe this is the only magic item in four chapters. Seems kind of paltry.

This is a weird encounter where these assassins posing as a legal team have bought up the whole inn. The caravan can't use the inn, and the assassins mock them. Our heroes ended up attacking them (After DARK THE DRAGON SORCERESS beat the leader in an arm wrestling contest, of course!). And wow these assassins are insanely powerful! I am talking an easy TPK here if I didn't adjust accordingly. I got around it by turning it into a bar fight. I busted out all the classic tropes: Slide a dude down the bar, chuck a PC through a window, and whack a thief with a bar stool. They loved this and were trying all sorts of crazy maneuvers. It was great. A paladin roundhouse kicked an assassin through a table.

This battle was in the aforementioned Inn-With-No-Name. I called it "The Hooting Owl" in honor of the owlbears that roamed the forest.

There were a whole bunch of encounters that were situational. They didn't feel right. My players had a hard time with them. There's a sort of pointless encounter where the cult drops a crate and their stolen stuff spills out. There's another where the caravan comes upon a guy buried up to his neck in the road. He has the word "oathbreaker" written on his forehead. My party came very, very close to killing him and argued endlessly about it. He's actually a Harper. Luckily, they decided to spare him.

Then we get to the weird anti-climax of this episode where a gnome joins the caravan and sort of befriends the heroes and kills a cultist. And the PCs are just kind of... there.

By this point it was late so we kind of blew right through this final section of stuff. We will start episode 5 next week!

I used this Hoard of the Dragon Queen Cultist Generator which helped me flesh out the cultists. You should definitely use it - this adventure is too vague in certain points.
Posted by Sean at 7:39 PM